Marilyn Vega says her life completely changed the moment she was connected with Family Promise. 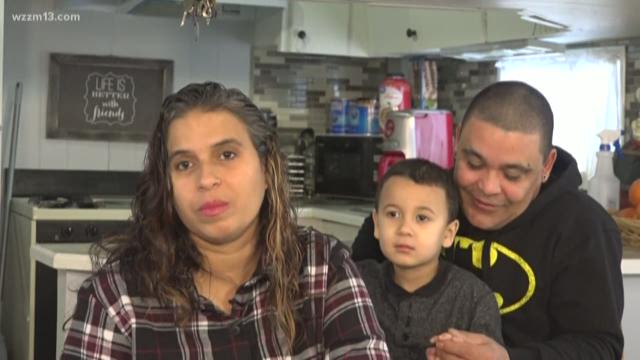 Every night, in Kent County, more than 100 families are put on a waiting list for emergency shelter. It is just one byproduct of a housing crisis that has plagued the community and caused homelessness to rise.

Marilyn Vega, a mother of three, is one of those people who wound up with no place to call home.

"Day by day we struggled with it, but we made it," said Vega.

Vega is no longer homeless. She hopes her story and her struggle will encourage those who still are.

Last year, Vega moved from Florida, back home to West Michigan. She searched for an apartment for weeks but found the rental rates to be too high. With nowhere to live, she and her youngest child, Alfredo, stayed with a friend, until they no longer could. Her fiancé, Raphael Rios, briefly stayed with his family. However, there was barely enough room for him. Like with many families in similar situations, homelessness had temporarily split up their family.

"I was just struggling a lot," she said. "I went to Mel Trotter and slept there one night with my son, then I had to leave in the morning. I called 2-1-1. They couldn't do anything on their end. They didn't have anything for me. The community didn't have openings in the shelters. They were full. Then, Monday came and that is when I received that call.

That call she is talking about is from Child Protective Services.

"They said they got an anonymous call from someone saying I was homeless with my son," Marilyn recalls. "I was terrified. I was scared. I was like I'm going to get in trouble. They are probably going to take my son because I'm homeless. But then the guy told me, 'you are not in trouble. We are not going to take your son away from you. We are just here to help you.'"

That help included putting her on a path that led to Family Promise of Grand Rapids. The agency serves about 350 families each year. Just under 1,000 of them are children.

Family Promise provides emergency shelter, basic needs like food and clothing, emotional support and ultimately a place to call their own.

"And when they move home, we make sure they are all set. We walk along side them so they don't become homeless again," says "Kate O'Keefe, the Community Relations and Development Manager.

That is what they did for Marilyn Vega. She says her life completely changed the moment she was connected with Family Promise.

"Now I knew I was safe. I was in a safe place where somebody could help me and my son," she said. "The case manager was trying to help me get an apartment and clothing, food and stuff. They provided everything for us at the Day Center. They were there as a comfort. They would always give me a hug. I can say so much about Family Promise. They were like a family to me. Not a friend, but like a family."

Marilyn utilized the emergency shelter for about two months before Family Promise helped her find permanent housing. The formerly homeless mother was now a home owner.

"They found me a mobile home from Partner Housing," she said from her quaint but lovely home. " I have my own place now. This is mine. I never thought in a million years that was going to happen."

"They are resilient. They are going through it. And, to have a safe place to land when you are terrified and overwhelmed is needed," says O'Keefe.

As Marilyn settles into her new reality, she's reminded of those still left out in the cold. She has a message for them.

"Put your head up. Keep on struggling to make it," she says while encouraging other families who find themselves homeless. "You will make it. If I made it, you will make it."

There are currently over 3,000 homeless school-aged children in Kent County and this number does not include children under five. Experts on the phenomenon say the main reasons families become homeless include, a lack of affordable housing and when household income gets cut in half, as it does with a family break-up or death.

O'Keefe says more than 85% of their families are employed when they enter shelter. They are able to find housing for about 90% of them. The average length of stay is 35 to 40 days. She says Family Promise is putting out a call to action. They would like local landlords to partner with them, offering at least one unit at a discounted rate.

More information can be found on the organization's website.