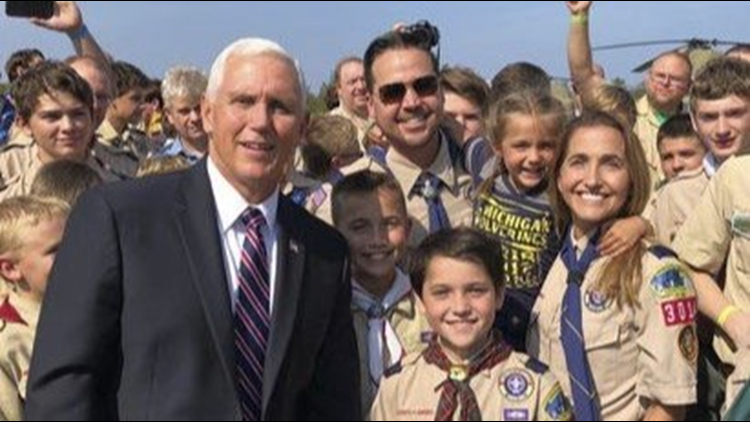 Photo by: Courtesy/Grand Haven Tribune
Jason and Erin Charnley of Spring Lake, along with their children—Carter, Cole and Olivia—pose with Vice President Mike Pence during a Scouts BSA rendezvous on Mackinac Island on Saturday.

Babcock, a First Class-rank member of Scout BSA Troop 14, chartered by the Spring Lake Lions Club, was with his troop on Mackinac Island this past weekend for the biannual Mackinac Rendezvous, a councilwide scouting event, according to his father, Travis Babcock.

Also represented at the event was Troop 3 from All Shores Wesleyan Church and Troop 1023 from Edgewood Elementary School in Fruitport.

“They were all really excited,” Travis said.

The elder Babcock said that the scouts learned Michigan history during fort tours and also learned about the importance of the vice president and the logistics involved with his visit. The youth were indifferent to the vice president’s use of a motorcade on the island, which prohibits motor vehicles, he said.

“Besides, there are a ton of vehicles on the island including a fire truck, police car, ambulance, snowplows, airport vehicles, golf carts and snowmobiles,” Babcock said.

Pence was on the island to address the Michigan Republican Party Leadership Conference.

According to a Washington Post story, he is the first sitting vice president to ever attend the event.