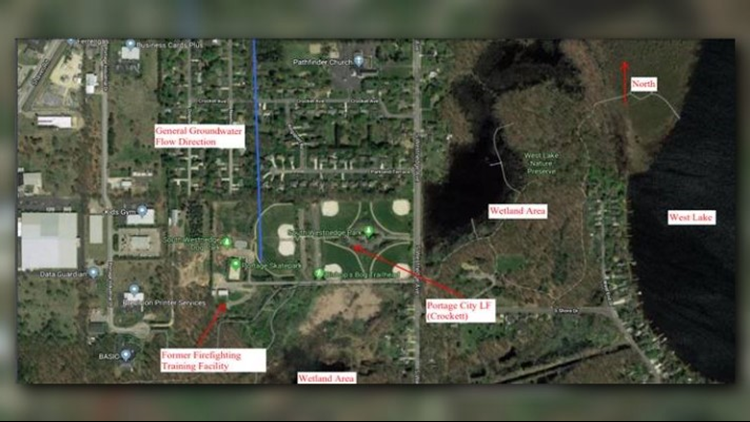 High levels of PFAS at former Portage landfill could be 'migrating'

Kalamazoo County officials said Friday that per- and polyfluoroalkyl (PFAS) contaminants found at a former landfill may be seeping into groundwater outside of the zone.

South Westnedge Park at 9010 South Westnedge Ave. in Portage was previously used as a municipal landfill. The city has conducted groundwater cleanups at the property since 1999, but PFAS was discovered at the location.

The PFAS contaminants, which are also called 'forever chemicals,' were initially discovered at the site in May of 2019. "The city began testing for PFAS at that time out of an abundance of caution because PFAS had been added to the list of contaminants of concern by EGLE," a news release said.

Officials measured the PFAS in the groundwater at the site and found levels of PFAS at 11,000 parts per trillion (ppt). The Environmental Protection Agency's advisory limit is 70 ppt.

The contaminants have been a focus in Michigan ever since they were discovered in drinking water wells in Northern Kent County in 2017. State officials then ramped up efforts to determine the scope of PFAS contamination in Michigan. The Department of Environment, Great Lakes and Energy spent a year testing community, school, child care and tribal water supplies.

Following the test in May, the city of Portage did more sampling of the groundwater last fall which found the PFAS contamination may be migrating out of the boundaries of the site.

"The city is continuing its investigation of PFAS contamination that may be emanating from the former landfill site," Kalamazoo County officials said. "The residents within the potentially affected area and who rely on private wells for their potable water needs are being contacted by the City of Portage, EGLE and Kalamazoo County Health & Community Services Department."

Officials sampled 25 residential wells near the South Westnedge Park site and the results should be completed by the end of January. Currently, there are no test results showing PFAS in private drinking water wells near the testing site.

Most of the homes and businesses near the contamination site are serviced by the Portage municipal water supply and their water meets clean drinking standards.

The city of Portage and the Kalamazoo county Heath and Community Services Department, EGLE and the Michigan Department of Health and Human Services are hosting an informational briefing the week of Feb. 10 to talk about the testing results and the next steps. Specifics on the meeting will be announced soon.

Kalamazoo County officials are familiar with finding PFAS in a water supply. High levels of contaminants were found in the city of Parchment in July of 2018.

The state of Michigan recently filed a lawsuit against 3M and other manufacturers of PFAS chemicals. The U.S. House of Representatives also passed a bill this month that would designate PFAS chemicals as hazardous substances and it would set a national drinking water regulation.