Can one of the last anti-abortion Democrats in Congress survive angering both sides?

Can Sen. Joe Donnelly once again navigate the abortion issue? 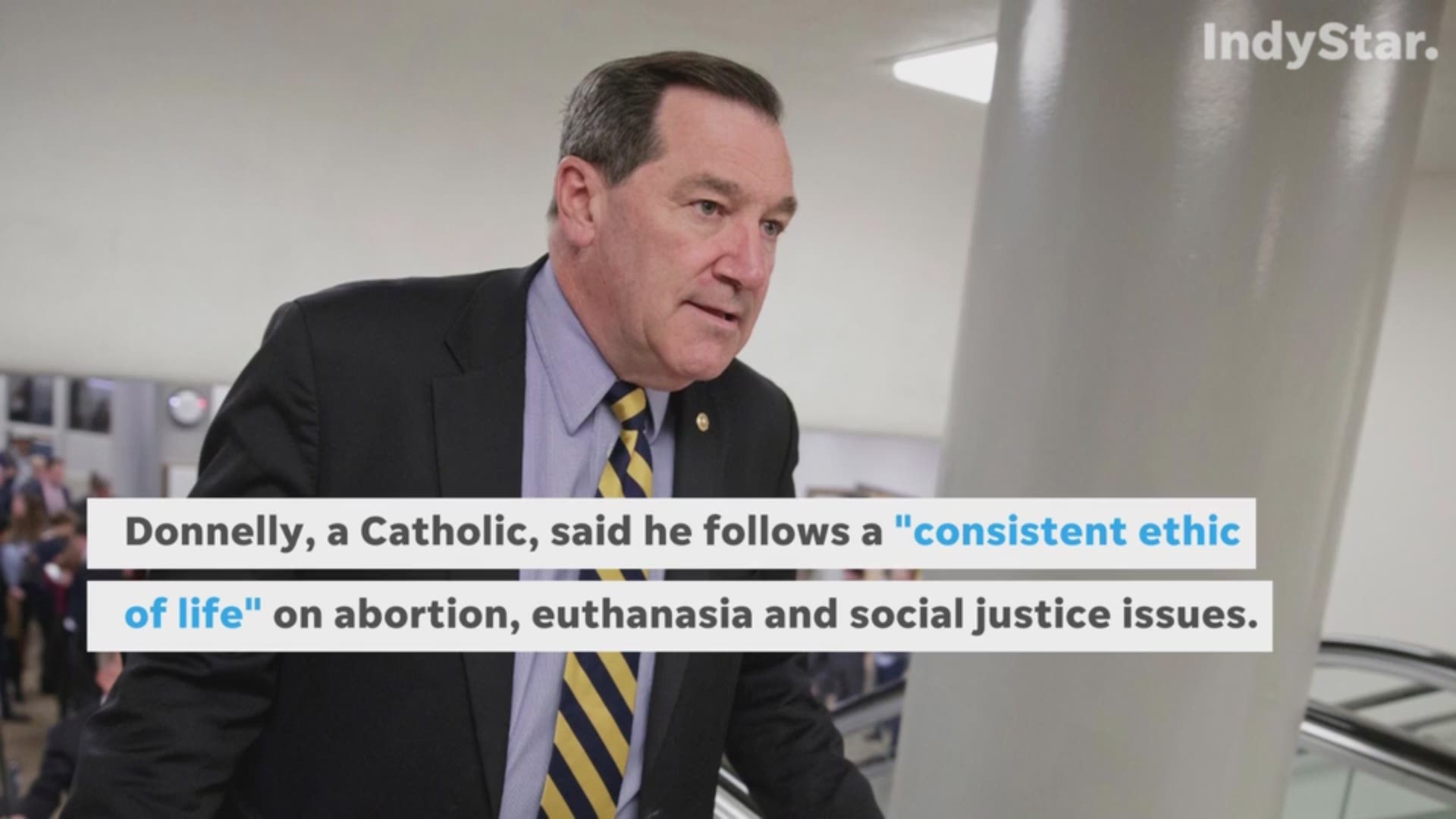 WASHINGTON – With the hours ticking down to a final vote on a landmark health care overhaul in March 2010, Joe Donnelly huddled with a small group of fellow anti-abortion Democrats in a nondescript, musty room on the top floor of the least-desirable House office building.

They sucked down paper cups of hot coffee while meeting in secret with White House attorneys into the early morning hours.

President Barack Obama was on the verge of achieving an expansion of health insurance that had eluded the last Democratic president.

But one of the very reasons that Obama was so close was also the reason he might fail.

Democrats had recaptured the House in 2006 by running moderate candidates such as Donnelly whose views on issues such as abortion were a good fit for his South Bend, Indiana-based district.

Now, Donnelly and enough other Democrats to sink the bill said they couldn’t vote for it unless they could prevent the new health care funding from being used to pay for abortion services – one of the several times throughout Donnelly’s political career that abortion would be a potentially career-ending or career-boosting issue for him, especially now as he seeks re-election.

As the lawmakers stepped out into the 1:30 a.m. darkness after the meeting, pleased that they weren’t greeted by the glare of television cameras, former Michigan Rep. Bart Stupak remembers Donnelly joking, “Hell, are we the only fools still up at this time of night?”

They had agreed on a solution, which was announced the next day, hours before the final vote.

But as has happened with Donnelly time and again on the issue of abortion, he ended up pleasing neither side.

As one of the few anti-abortion Democrats left in Congress, Donnelly is again being targeted for defeat by anti-abortion groups while not getting help from abortion rights advocates – despite the fact that both sides say he has been with them on more than half of their most important votes.

“Abortion is one of those issues where you’re either 'one of us' or you’re 'one of them,’ ” said Deana A. Rohlinger, a sociology professor at Florida State University who has written a book about abortion politics. “So being a pro-life Democrat can be problematic for not only trying to get Republican votes, but also for getting Democratic votes.”

Of the 64 House Democrats who voted in 2009 to keep the Affordable Care Act from subsidizing abortions, only 13 are left in Congress.

Unlike most anti-abortion Democrats who have since retired or been defeated, however, Donnelly survived his 2010 re-election and went on to be elected to the Senate in 2012 after his Republican opponent imploded after saying a pregnancy resulting from rape was intended by God.

But abortion may now be the most difficult issue for Donnelly – one of the most vulnerable senators on the ballot this year – who is trying to prove that there’s still any kind of a middle in politics in an increasingly polarized electorate.

Donnelly – who joined West Virginia’s Joe Manchin and Pennsylvania’s Bob Casey as the only Senate Democrats to vote in January to ban abortions after 20 weeks of pregnancy – needs Republican votes to win re-election. But he risks alienating motivated Democrats if he backs a nominee who might overturn Roe v. Wade, the decision that said women have a constitutional right to an abortion.

“I am, and have been, disappointed in his continued failure to advocate for Hoosier women and families regarding issues of reproductive justice,” said Emily O’Brien, vice president of the Indiana National Organization for Women, which is pressuring Donnelly to reject Supreme Court nominee Brett Kavanaugh.

Anti-abortion groups, however, are also critical of Donnelly while praising GOP challenger Mike Braun, who is “100 percent pro-life” – including opposing abortion in the cases of rape, incest and to save the life of the woman. Donnelly makes exceptions in all three cases.

“He waffles,” Sue Swayze Liebel, the Indiana state chair of the Susan B. Anthony List,  said of Donnelly. “And babies don’t need wafflers. They need champions.”

Days after being sworn into office in 2007, Donnelly cast his first vote that pleased anti-abortion advocates. He opposed a Democratic proposal to allow federally funded stem cell research.

And when the House passed its initial version of the Affordable Care Act in 2009, Donnelly was among the 64 Democrats behind an amendment authored by Stupak to bar the new federally subsidized private insurance plans the bill would create from covering elective abortion services.

But when the Senate didn’t include that provision in its version, anti-abortion lawmakers in the House were in a bind. Democrats had lost their filibuster-proof majority in the Senate at the beginning of 2010, meaning the House had to accept the Senate’s version or the overhaul would likely fail.

Of the final holdouts, Donnelly and six other anti-abortion Democrats agreed they could vote for the Senate bill – which ended up passing 219 to 212 – if Obama signed an executive order clarifying that no taxpayer dollars could be spent on abortions.

“As a pro-life congressman, I will continue to act according to my deeply held beliefs and those of my constituents,” Donnelly said at the time. “I believe that means opposition to abortion, as well as improving access to health care for all people.”

But anti-abortion groups called the executive order a sham, even as abortion rights groups complained it could lead most private health insurers to stop offering abortion services.

His vote for the Affordable Care Act is still one of three highlighted by the Susan B. Anthony List on the doorhangers they’ve been delivering to Hoosier homes since October.

After voting multiple times in the House to block funding to Planned Parenthood and doing so again in the Senate in August 2015, he switched his position later that year.

1 / 19
Kelly Wilkinson, Kelly Wilkinson / The Star
US Senator Joe Donnelly takes off his jacket before he speaks during a press conference at Ralph's Great Divide, Wednesday, May 9, 2012, the morning after Senator Richard Lugar's historic defeat. Donnelly will face Richard Mourdock in November for the seat held by Lugar for 36 years.

“I still wish Planned Parenthood did not provide abortions,” Donnelly said. “But I think being pro-life also means you want to make sure that women and families have access to basic health care and preventive services, which Planned Parenthood provides, a lot of time in rural communities as maybe one of the only providers.”

Still, Donnelly – along with Casey and Manchin – is one of the few Senate Democrats who does not have a 100 percent voting record with Planned Parenthood Action Fund. The group tallies Donnelly as supporting its positions 67 percent of the time since he has been in Congress.

The National Right to Life Committee also counts Donnelly as having voted their way more than half the time.

Yet anti-abortion groups are going after one of the few Democrats who sometimes votes with them because the times that he doesn’t, “babies die,” said Liebel of SBA List, which expects to canvass hundreds of thousands of homes in Indiana before the November election.

Betty Cockrum, the former longtime leader of Planned Parenthood of Indiana and Kentucky, said she understands why it’s hard for abortion rights advocates to be zealous about backing Donnelly, even if they would like Braun even less.

But while Planned Parenthood Action Fund isn’t directing any of its $20 million being spent on this year's races to Indiana, Cockrum said she’ll stand behind Donnelly even if he votes to confirm Kavanaugh.

“We need to look at the bigger picture here … which is to avoid strengthening the anti-choice, anti-woman culture that exists in Washington, D.C., these days, and at state levels across the country,” Cockrum said.

Plus, she adds, “what politician gives you everything you want?”