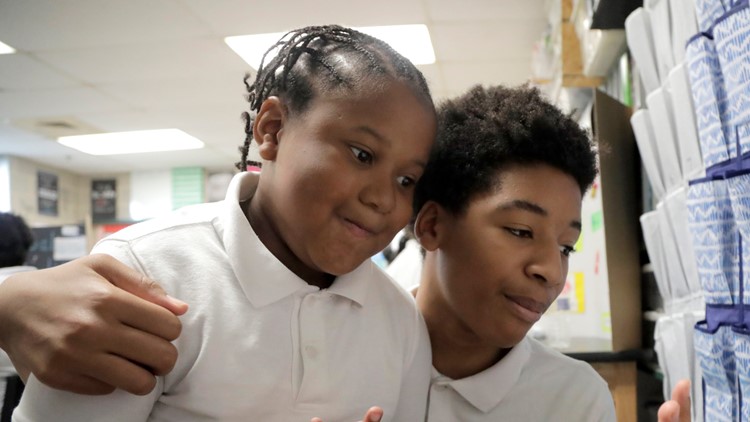 Photo by: AP
In a photo taken Tuesday, July 2, 2019, Kameryn Wylie, 13, right, a 7th grade student, talks about his project on kinetic energy to 3rd grade student Trinick Thompson, 9, during the science fair at New Song Community Learning Center. Wylie has been sharing his stress-relieving techniques such as deep breathing and closing his eyes with classmates and his family members to help them cope with stress. (AP Photo/Julio Cortez)

When she transferred to a new K-8 school two years ago, Tinazsha Johnson was in deep distress. The Baltimore sixth grader was crushed by the death of her mother. Her father was in and out of lockups. She'd witnessed searing violence in her neighborhood and felt overwhelmed helping her grandparents raise her younger siblings.

Fast forward to today: Daily life is still tough, but after about two years as a student at one of Baltimore's new "trauma-sensitive" schools, she's learning to manage the cumulative effects of stress and grief that were so relentless they made her developing brain feel like a revving engine. As the 15-year-old prepares to graduate from eighth grade, she's gained a better understanding of working out conflicts, understanding emotions and regulating her behavior.

"I used to always be fighting, fussing and cussing people out. But this last year, I've been doing a lot better 'cause I've been learning how to control my anger in a lot of ways and think positive thoughts to get me through," Tinazsha said in an interview at the year-round school, which she says has become her sanctuary from streets where the names of young crossfire victims are spray-painted on walls as tributes.

In crime-plagued Baltimore and other cities, school officials are increasingly realizing that chronic childhood trauma affects brain development and creates the risk of physical and behavioral health problems down the line. Districts have responded by creating the trauma-sensitive schools, both in big systems such as Chicago and San Francisco and smaller ones in states such as Iowa and Wisconsin.

Trump was roundly criticized by opponents who blamed him, as head of the federal government, for not helping Baltimore with its challenges. Indeed, the "trauma-sensitive" schools effort — made possible in part with federal funds — can help only a fraction of those who need it.

In Baltimore, the need to address childhood trauma and students' mental health was underscored in 2015, when the death of a young black man in police custody sparked massive protests and the city's worst rioting in decades. Freddie Gray's death brought renewed attention to the poverty, inequity and crime that have festered in large swaths of Baltimore for decades.

"It increased the urgency and helped us to see that our whole city is in crisis," said James Padden, an education official in Baltimore, a majority-black city where the poverty rate is roughly double the national figure.

With the help of a $2.3 million federal grant in 2016, officials have transformed 13 public schools in troubled West Baltimore into the trauma-sensitive schools where students have access to full-time mental health clinicians, mindfulness and breathing exercises, and "peace corners" with pillows and exercise books where they can retreat and compose themselves. Staff members have reached out into the community to build relationships with students' guardians.

The New Song Community Learning Center that Tinazsha attends is in the heart of Sandtown-Winchester, Gray's former neighborhood, where open-air drug markets fill an economic vacuum and police helicopters routinely buzzes overhead. The school is one of West Baltimore's anchor institutions, a warm but structured environment where college-bound alumni help out during summer breaks.

The need is still greater than the supply. When officials applied for the federal grant, about 4,600 students attended the future trauma-sensitive schools — about 5.5 percent of Baltimore's 84,000 public school students.

There's widespread agreement more students would benefit from trauma-sensitive schools, amid research showing many of Baltimore's youngest citizens are repeatedly exposed to trauma. In a May Baltimore Sun opinion piece , a leader of a behavioral health nonprofit wrote that the children of Maryland's biggest city face a "mental health crisis." Last week, a city councilman announced in another opinion piece his plan to make trauma response a focus of all city agencies that deal with children.

The federal grant for trauma-sensitive schools expires this year. With remaining funds, officials are focusing on training everyone from teachers and administrators to cafeteria workers on recognizing and responding to traumatized students. Experts from Baltimore-based Johns Hopkins University and the University of Maryland are contributing services.

Padden said the district will have a full-time social worker in all schools for the 2019-20 year, and the city has created "calming spaces" and "wholeness" sites for students in schools that aren't designated trauma-sensitive centers.

New Song's executive director, Mark Carter, is acutely aware of the need. He marvels at his students' resiliency. Many had to negotiate childhoods framed by chronic poverty, crime and other challenges. In recent weeks, the school system held a ceremony to memorialize the dozen Baltimore students ranging from ages 7 to 18 who were gunned down this academic year.

"We would like our children to have childhoods. And yet the neighborhood and sometimes their family circumstances don't permit that," Carter said in his office, decorated with photos of civil rights leaders including Rosa Parks and Martin Luther King Jr. "So we straddle this world between creating high academic expectations but also realizing, for instance, at the age of 9 you shouldn't have to take care of all your brothers and sisters because of family disintegration."

Patrick Sharkey, a sociologist at Princeton University, said children "enter their classrooms carrying the burden of violence with them," which harms their ability to get a good night's sleep and concentrate.

Programs like those underway in Baltimore that calm the school environment and teach children to be mindful of emotions can help, he said. He added it's important to acknowledge "the most effective way to improve academic achievement is to confront the problem of community violence."

"While other cities have completely transformed, Baltimore hasn't been able to," Sharkey said.