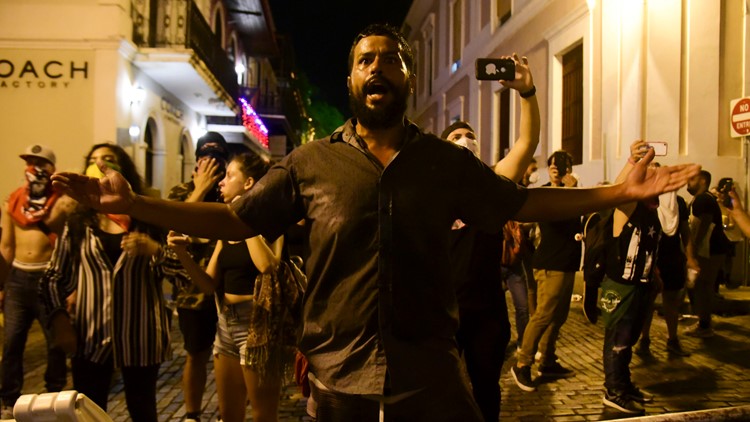 Photo by: AP
Citizens riot near the executive mansion demanding the resignation of Gov. Ricardo Rossello, in San Juan, Puerto Rico, Monday, July 15, 2019. Protesters are demanding Rossello step down for his involvement in a private chat in which he used profanities to describe an ex-New York City councilwoman and a federal control board overseeing the island's finance. (AP Photo/Carlos Giusti)

Her kids have been uprooted twice in two years when first one school, then another, was closed by budget cuts under Gov. Ricardo Rosselló. Her grandmother, a retired teacher, is anguished over the possibility of losing her pension in future rounds of cutbacks.

Villalón was outraged when Rosselló's former education secretary was arrested and accused of steering millions in improper contracts to politically connected contractors. Then hundreds of pages of online chats between Rosselló and members of his administration leaked, revealing the men mocking women, the handicapped and victims of Hurricane Maria.

Villalón has had enough.

"It's the final straw," the 31-year-old homemaker said as she prepared to march with thousands of other Puerto Ricans from the capital to the governor's residence Wednesday afternoon. "My kids' classrooms have mold in them.... There's just so much outrage that's been building over time."

That feeling was rippling across Puerto Rico Wednesday — the feeling of a people fed up with neglect from Washington and the U.S. territory's own government.

The island is mired in crises. It is struggling to emerge from a debt-driven financial failure and receive federal funding to help recovery from Hurricane Maria. The September 2017 storm left thousands dead in its wake due to the collapse of the island's electrical system and a months-long failure to provide care to the elderly and medically vulnerable. Since then, hundreds of schools have been closed to save money and a wide range of social services and pensions are being cut back, or are under threat.

"Puerto Rico has suffered so much and we can't deal with the cynicism of these leaders anymore," singer Ricky Martin said in a video message posted online. "Enough already. Enough already."

Puerto Rico Gov. Ricardo Rossello speaks during a press conference in La Fortaleza's Tea Room, in San Juan, Puerto Rico, Tuesday, July 16, 2019. Rossello summoned the press a few hours after a riot took place near the executive mansion, where protesters demanded Rossello step down after a leak of profanity-laced and at times misogynistic online chat with nine other male members of his administration. (AP Photo/Carlos Giusti)
AP

Martin said he was flying to Puerto Rico to march along with other Latin music stars from the island, including singer/producer Benito A. Martínez Ocasio, known as Bad Bunny, and rapper René Pérez, known as Residente, who released a song online Wednesday morning calling people to the streets.

"This is coming out early so you can eat it for breakfast," Residente raps on the song, "Sharpening the Knives." ''Fury is the only political party that unites us."

In comments to The Associated Press shortly before the protest was to start, he said, "The anger is so great that for the first time I'm seeing Puerto Rico rise up and take to the streets."

In colonial Old San Juan, police were erecting concrete barricades and shop owners were covering store windows with metal sheeting or plywood as if a hurricane were coming. The multi-colored umbrellas that form a photogenic awning over the street in front of the governor's mansion were taken down.

The scandal erupted as Rosselló's former secretary of education and five other people were arrested on charges of steering federal money to unqualified, politically connected contractors. Starting Thursday, an anonymous person or people with access to the chats leaked dozens of pages of them to two local outlets. On Saturday, Puerto Rico's Center for Investigative Journalism published 889 pages.

Referring to Carmen Yulín Cruz, the mayor of San Juan who had announced her intent to run against Rosselló in 2020, the governor says, "she's off her meds."

"Either that, or she's a tremendous HP," he continues, using the Spanish initials for "son/daughter of a bitch."

One chat group member calls the head of the federal oversight board a "kitten." Another participant jokes that a female member of the territory's senate belonged in a whorehouse. Along with a photo of himself greeting an obese man, the governor writes "I'm still there. It's my fourth orbit. He generates a strong gravitational pull." Talking about a lack of forensic pathologists at a government forensic agency, Sobrino says "can't we feed a body to the crows?"

Rivera Marín, Sobrino, Bermúdez and Miranda have already said they were resigning or been fired.

Nicole Howard Arroyo, a 36-year-old store manager, said the chats revealed "a total lack of political and social ethics on the part of a leader."

"I think the chat has taken off the reins, it's something bigger, across the island," she said. "People are waking up."