George H.W. Bush's casket to lie in repose all night at Houston church

The 41st president will lie in repose overnight at St. Martin's Episcopal Church in Houston. 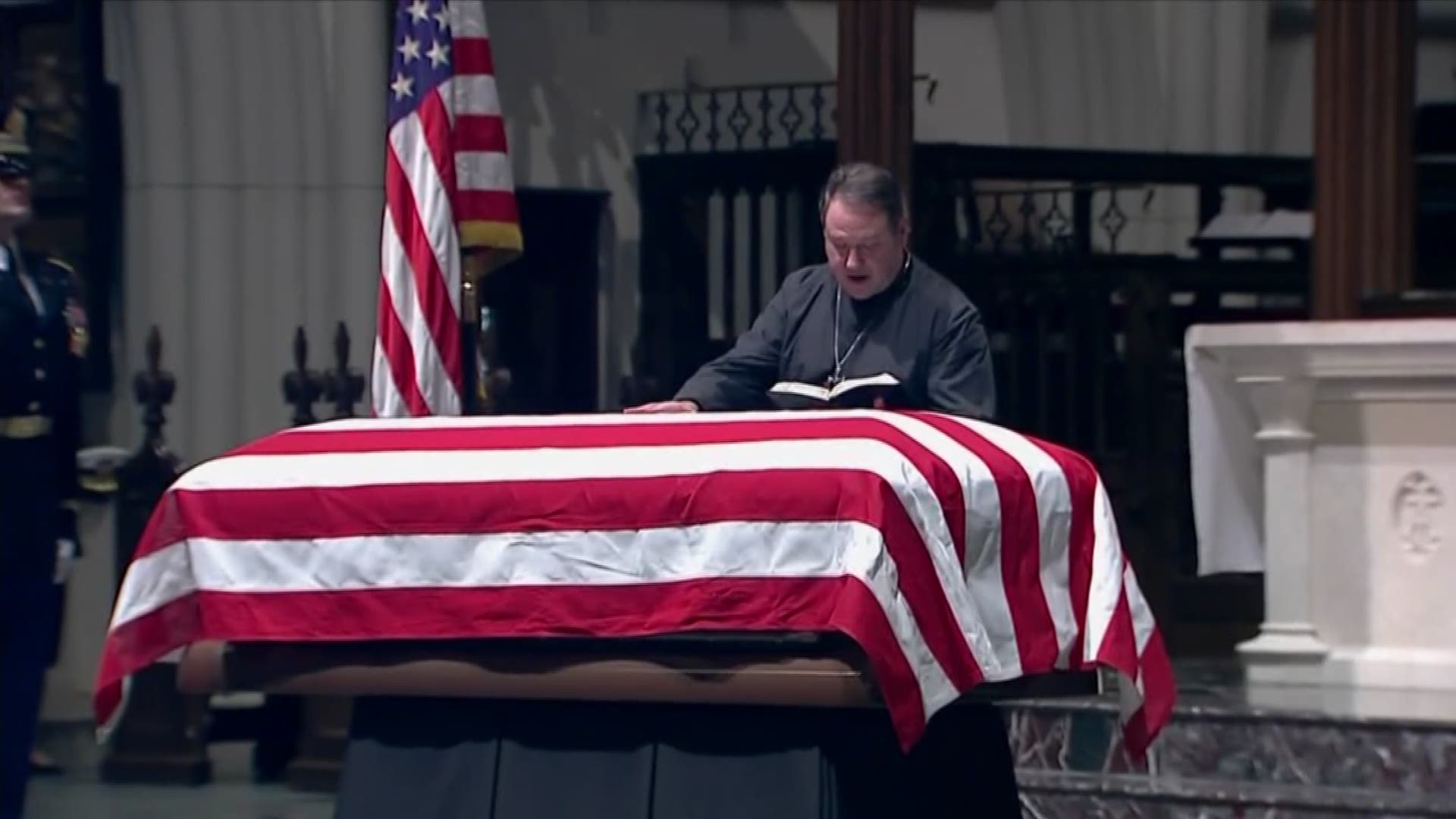 WASHINGTON (AP) — The body of former President George H.W. Bush is set to lie in repose all night at the Houston church where his family worshiped.

People lined up Wednesday night at St. Martin's Episcopal Church to pay their respects to the nation's 41st president, who died last week. It's the same church where services for Bush's wife, Barbara, were held in April.

One member from each of the five armed-service branches stood around Bush's casket. As mourners passed by, the sound of their footsteps was the only thing interrupting an otherwise quiet scene.

The line moved slowly and halted altogether whenever mourners stopped in front of the casket to cross themselves or otherwise acknowledge Bush. One group of Navy sailors saluted as they filed past.

About 1,200 mourners are expected for a service at St. Martin's Episcopal Church on Thursday morning. Delivering a eulogy is James Baker, Bush's former secretary of state and longtime confidant.

Bush's grandson George P. Bush will give the other eulogy. He is the Texas land commissioner.

Bush's body returned to Texas on Wednesday evening at Houston's Ellington Field on a plane from Washington. A crowd of about 300 invited guests, including Astros manager A.J. Hinch, greeted the arrival of the plane.

Among those in attendance were past and present members of Houston's various professional sports teams, including Hinch, former Texans receiver Andre Johnson and former Rockets player Calvin Murphy.

Bush was a big sports fan and regularly attended Astros, Rockets and Texans games. He and his wife, Barbara, could often be seen sitting behind home plate at Astros games.

The military aircraft, nicknamed Special Air Mission 41 in honor of the 41st president, had taken his body to Washington on Monday to lie in state at the Capitol.

Mourners wanting to pay their respects to former President George H.W. Bush began lining up outside the church hours before his visitation is due to start.

The first people in line arrived Wednesday morning, almost 10 hours before the Houston church was scheduled to open to visitors.

Pennie Werth-Bobian was at the front of the line. The 56-year-old from Tomball, Texas, says that she used to visit with Bush while a friend of hers cut his hair and that they became friends. She says the second time they met, he told her to call him George.

Another funeral service will be held Thursday morning at St. Martin's. Then his casket will be loaded onto a train for a journey to College Station, where he will be laid to rest near his presidential library at Texas A&M University. He will be buried next to his wife, Barbara, and daughter Robin, who died of leukemia at age 3.