The program before the court is Deferred Action for Childhood Arrivals, a program that aimed to bring people out who have been living in the country illegally. 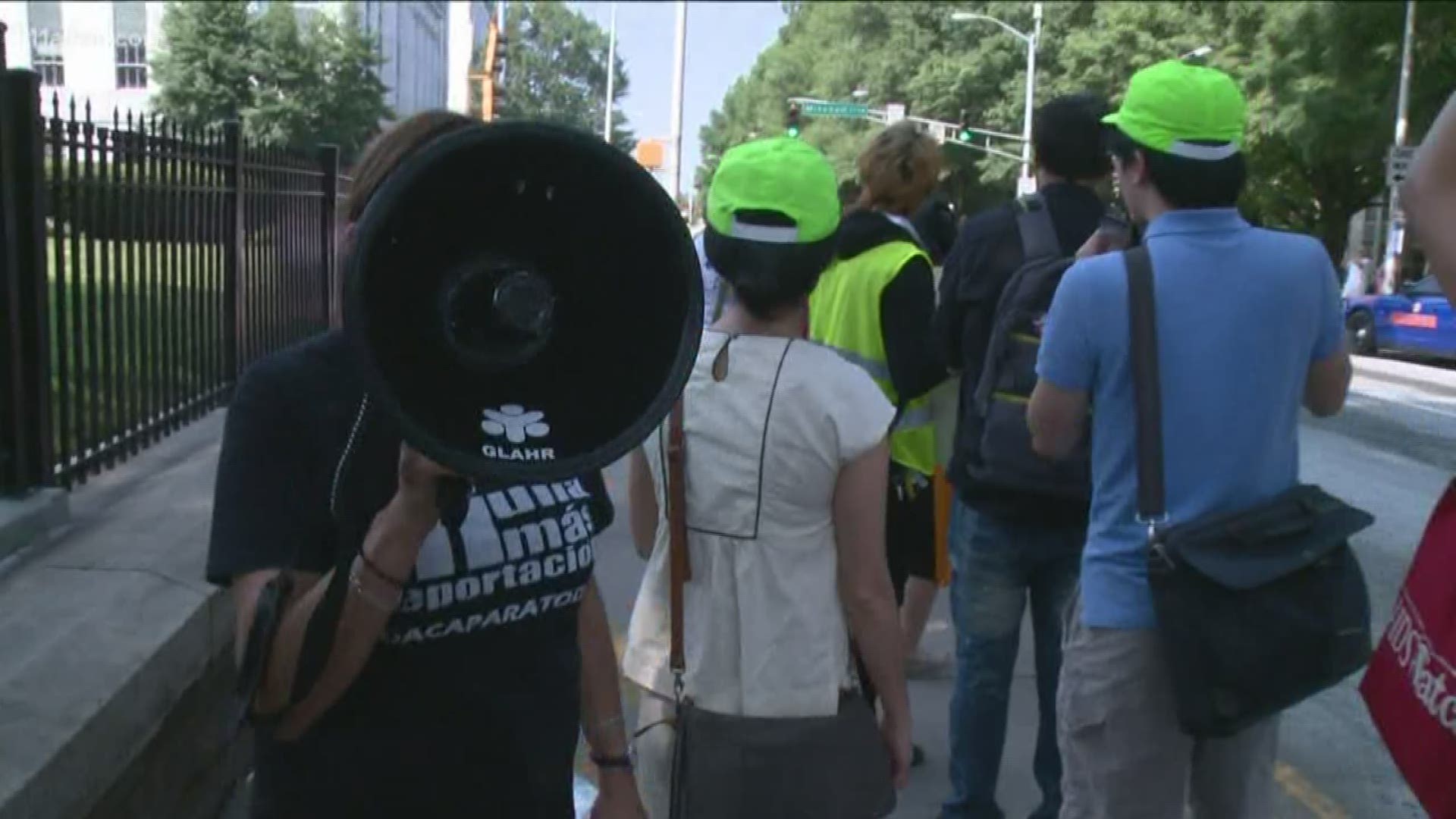 WASHINGTON — The Supreme Court is taking up the Trump administration's plan to end legal protections that shield 660,000 immigrants from deportation, a case with strong political overtones amid the 2020 presidential election campaign.

All eyes will be on Chief Justice John Roberts when the court hears arguments Tuesday. Roberts is the conservative justice closest to the court's center who also is keenly aware of public perceptions of an ideologically divided court.

It's the third time in three years that the administration is asking the justices to rescue a controversial policy that has been blocked by several lower courts.

The court sided with President Donald Trump in allowing him to enforce the travel ban on visitors from some majority Muslim countries, but it blocked the administration from adding a citizenship question to the 2020 census.

Roberts was the only member of the court in the majority both times, siding with four conservatives on the travel ban and four liberals in the census case. His vote could be decisive a third time, as well.

The program before the court is Deferred Action for Childhood Arrivals, an Obama-era program that aimed to bring out of the shadows people who have been in the United States since they were children and are in the country illegally. In some cases, they have no memory of any home other than the U.S.

With Congress at an impasse over a comprehensive immigration bill, President Barack Obama decided to formally protect people from deportation while also allowing them to work legally in the U.S.

But Trump made tough talk on immigration a central part of his campaign and less than eight months after taking office, he announced in September 2017 that he would end DACA.

Credit: AP
Michelle Lainez, 17, originally from El Salvador but now living in Gaithersburg, Md., speaks during a rally outside the Supreme Court in Washington, Friday, Nov. 8, 2019. The Supreme Court on Tuesday takes up the Trump administration’s plan to end legal protections that shield nearly 700,000 immigrants from deportation, in a case with strong political overtones amid the 2020 presidential election campaign. (AP Photo/Susan Walsh)

There are two questions before the Supreme Court: whether federal judges can even review the decision to end the program and, if they can, whether the way the administration has gone about winding down DACA is legal.

There also are similarities to the travel ban case, in which the administration argued that courts had no role to play and that the executive branch has vast discretion over immigration, certainly enough to justify Trump's ban. In the Supreme Court decision, Roberts wrote that immigration law gives the president "broad discretion to suspend the entry of aliens into the United States. The President lawfully exercised that discretion."

The Supreme Court fight over DACA has played out in a kind of legal slow motion. The administration first wanted the justices to hear and decide the case by June 2018. The justices said no. The justice Department returned to the court a year ago, but the justices did nothing for more than seven months before agreeing to hear arguments.

The delay has bought DACA recipients at least two extra years because a decision now isn't expected until June 2020, which also could thrust the issue into the presidential campaign.

In part the court's slow pace can be explained by a preference to have Congress legislate a lasting resolution of the issue. But Trump and Congress failed to strike a deal on DACA.

RELATED: For 30-somethings, stakes are high over future of DACA

Janet Napolitano, the University of California president who served as Obama's homeland security secretary when DACA was created, said the administration seems to recognize that ending DACA protections would be unpopular.

"And so perhaps they think it better that they be ordered by the court to do it as opposed to doing it correctly on their own," Napolitano said in an interview with The Associated Press. She is a named plaintiff in the litigation.

Solicitor General Noel Francisco, who is arguing the administration's case at the Supreme Court, pushed back against that criticism.

"We think the way we did it is entirely appropriate and lawful. If we did it in a different way, it would be subject to challenge," Francisco said at a Smithsonian Institution event exploring the current Supreme Court term.

The Trump administration has said it moved to cut off the program under the threat of a lawsuit from Texas and other states, raising the prospect of a chaotic end.

Then-Attorney General Jeff Sessions determined DACA to be unlawful because Obama did not have the authority to adopt it in the first place. Sessions cited an expansion of the DACA program and a similar effort to protect undocumented immigrants who are parents of American children that were struck down by federal courts. A 4-4 Supreme Court tie in 2016 affirmed the lower court rulings.

Texas and other Republican-led states eventually did sue and won a partial victory in a federal court in Texas.

The administration's best argument is a simple one, said Josh Blackman, a professor at South Texas College of Law in Houston: "The Supreme Court should allow the Trump Administration to wind down a policy it found to be unlawful, even if reasonable judges disagree about DACA's legality."

Trump has said he favors legislation on DACA, but that it will take a Supreme Court ruling for the administration to spur Congress to act.

On at least one point, Trump and his DACA critics agree.

"Only legislation can bring a permanent sense of stability for all of these people," said Microsoft president Brad Smith. Microsoft joined the challenge to the administration because, Smith said, 66 employees are protected by DACA.

The Department of Homeland Security is continuing to process two-year DACA renewals so that in June 2020, hundreds of thousands of DACA recipients will have protections stretching beyond the election and even into 2022.

If the high court rules for the administration, it is unclear how quickly the program would end or Congress might act.