The storm made travel treacherous in places as wind-whipped snow piled up. Scores of flights were cancelled at airports across the region. 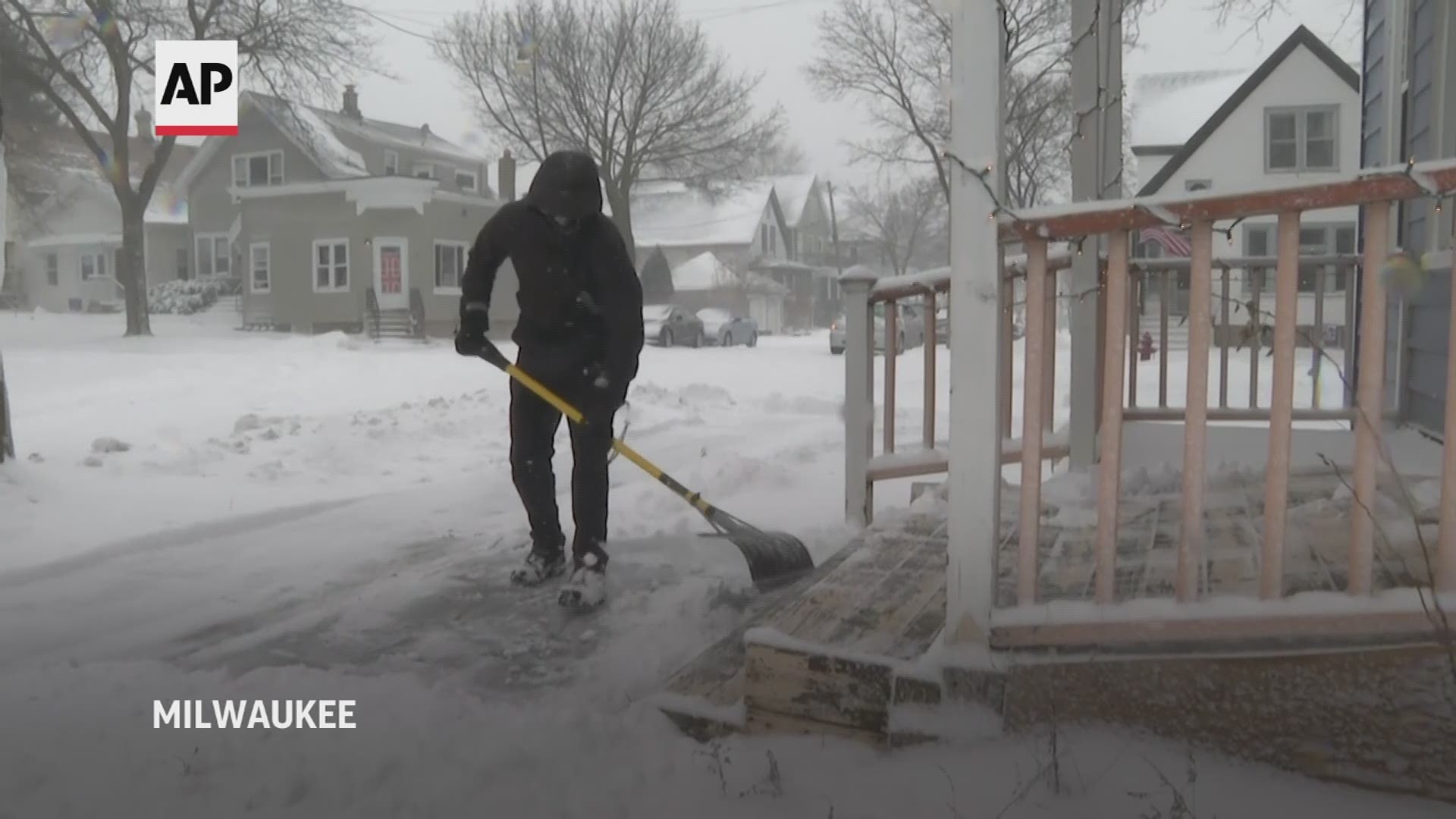 OMAHA, Nebraska — A major winter storm dumped more than a foot of snow on parts of the middle of the country while another system blanketed parts of the Southwest with snow, disrupting travel for a second consecutive day Tuesday and shuttering many schools.

There were closures of several coronavirus testing sites on Monday and Tuesday in Nebraska and Iowa, and both states saw 12 to 15 inches (30.5 to 38.1 centimeters) of snow in places. At least 4 inches (10 centimeters) of snow was expected through Tuesday across most of an area stretching from central Kansas northeast to Chicago and southern Michigan.

National Weather Service meteorologist Taylor Nicolaisen, who is based near Omaha, Nebraska, said up to 15 inches (38 centimeters) was reported in spots between York, Nebraska, and Des Moines, Iowa. He said it's uncommon for the region to get more than a foot of snow from a single storm, and it has been decades since some cities saw this much snow.

The storm made travel treacherous in places as wind-whipped snow piled up. Interstates were temporarily closed in western Nebraska and in Wisconsin near Milwaukee because of crashes Tuesday morning, and scores of flights were cancelled at airports across the region. Officials urged drivers to stay off the roads.

In Wisconsin, the weather service predicted up to 10 inches (25.4 centimeters) of snow could fall in the Milwaukee area, with the highest totals along Lake Michigan.

"It's not only snow but it's pretty darn windy out there, so that's causing a lot blowing and drifting," he said.

In the Chicago area, between between 3 inches (7.6 centimeters) and 5 inches (12.7 centimeters) of snow had fallen by early Tuesday. Meteorologist Bett Borchardt forecast snowfall up to 8 inches (20.3 centimeters) or more in northern Illinois before the storm ends Tuesday evening.

The last comparable snowfall hit the area in November 2018, when 8.4 inches (21.3 centimeters) fell.

Many schools and businesses closed for a second day in a row Tuesday across the Midwest as crews worked to dig out after the storm. In western Iowa, Missouri Valley Superintendent Brent Hoesing reworked the lyrics of the 1970s hit "I Will Survive" to tell students in his district, "So Stay Inside."

Roughly 250 semi trucks waited out the storm at the Petro truck stop alongside Interstate 80 in York, Nebraska. Manager Rachael Adamson said she could see knee-high drifts and that sidewalks needed to be shoveled every half hour on Monday.

"We haven't had this much snow in quite a few years," Adamson said.

In the South, one person was dead and others were injured after a tornado carved a path of destruction north of Birmingham, Alabama, on Monday night, leaving the area with crumpled buildings and downed trees.

In the Southwest, more than a foot of snow fell in the mountains of Southern California, Nevada and Arizona. Icy conditions in mountains north of Los Angeles have shut Interstate 5 in Tejon Pass and State Route 58 in Tehachapi Pass as one storm exits and a major new system headed toward California. Caltrans says the closure of I-5 between the communities of Castaic and Grapevine is in effect until further notice Tuesday. There was no estimate for reopening SR-58.

A storm buried northern Arizona in snow on Monday while sending flurries to the outskirts of Las Vegas and Phoenix. And most of Nevada was bracing for another series of powerful winter storms that could bring several feet of snow to the mountains above Lake Tahoe by Thursday.

Preliminary snowfall reports from the latest storm included 14.2 inches (36 centimeters) at the Flagstaff airport and 16 inches (40.6 centimeters) at Payson between Sunday night and late Monday, the weather service said.

Another major storm was approaching the coast with the potential to bring 7 to 10 inches of rain to central California and dump several feet of snow across the Sierra Nevada mountains. That additional rain and snow will bring the threat of possible flash floods and landslides to areas north and south of San Francisco Bay.