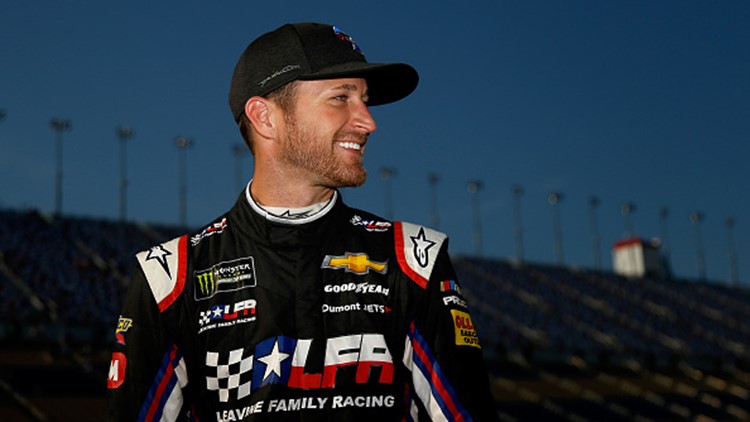 Photo by: Michael Reaves/Getty Images
Kasey Kahne, driver of the #95 Dark Matter presented by Ionomy Chevrolet, stands on the grid during qualifying for the Monster Energy NASCAR Cup Series Quaker State 400 presented by Walmart at Kentucky Speedway on July 13, 2018 in Sparta, Kentucky.

CONCORD, N.C. — Kasey Kahne announced Thursday that he will retire from full-time racing in NASCAR and plans to focus on the sprint car team he owns.

Kahne said in a Twitter post that he is at ease with the decision after 15 years racing in NASCAR. Kahne, from Enumclaw, Washington, made it to NASCAR via sprint car racing and his Kasey Kahne Racing team competes in the World of Outlaws series.

"I'm not sure what the future holds for me," Kahne said. "The highs don't outweigh the lows and the grueling schedule takes a toll on your quality of life. I need to spend more time doing the things I enjoy and love and that's spending time with (son) Tanner and my sprint car teams."

The former Hendrick Motorsports driver has 18 victories, including a playoff-clinching win last season at Indianapolis Motor Speedway. That win came amid speculation that Hendrick would part ways with Kahne following six seasons, and Hendrick made it official two weeks later.

Kahne signed with Leavine Family Racing for 2018. He has one top-five finish in 23 starts for Leavine, and said the team offered him a ride for next year but Kahne did not want to commit to NASCAR. The Cup schedule is 38 weekends.

Kahne's announcement came one day after 43-year-old Elliott Sadler said he will walk away from NASCAR after 21 seasons.

Sadler is 43 and currently drives for JR Motorsports in the second-tier Xfinity Series. He spent 12 full-time seasons in the Cup Series driving for Wood Brothers Racing, Robert Yates Racing, Evernham Motorsports and Richard Petty Motorsports. He is retiring to spend more time with his two young children.

They are the latest in a growing list of NASCAR drivers who have hanged up their helmets in recent years, following Danica Patrick, Dale Earnhardt Jr., Carl Edwards, three-time champion Tony Stewart and four-time champ Jeff Gordon.