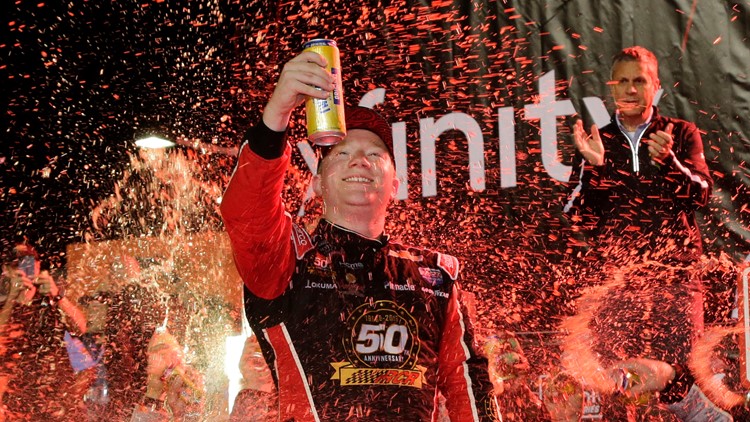 Reddick and Custer traded the lead three times in a single lap with Reddick finally surging his Richard Childress Racing entry to the front for good with 18 laps remaining. Reddick is the first to win consecutive Xfinity championships since Ricky Stenhouse Jr. in 2011 and 2012 and ninth driver with multiple titles.

It’s the only championship for manufacturer Chevrolet, which was shut out in Friday night’s Truck Series finale when Matt Crafton won the title in a Ford. Chevrolet is not represented in the Cup championship race Sunday.

Reddick’s title comes in his final ride as full-time driver of the No. 2 for RCR. He’s being promoted to the Cup Series next season to drive the No. 8 Chevy.

Custer finished second and runner-up to Reddick in the championship race for the second consecutive year. Stewart-Haas Racing announced Friday that Custer is being promoted to the Cup Series next year. Same for Christopher Bell, who finished fifth in the race and third in the championship picture, who was probably the title favorite but his Toyota dropped off in the final stage of his final ride before he moves to Cup.

Justin Allgaier, who won at Phoenix last weekend to make the final four, finished 14th and last in the championship race.

Reddick won the title last year driving for JR Motorsports, but he had already made the decision to move to Childress for this season. He had to win at Homestead to claim both titles.

Childress has likened the 23-year-old to Hall of Famer Cale Yarborough and believes the driver will feature heavily in the future of the organization, and Reddick is the first driver in the Xfinity Series to win consecutive titles for different teams.

“It’s all about Richard, man,” said Reddick. “He’s the one who believed I could be a champion even before I won the first one.”

Reddick ended the season with six victories, shy of Bell’s eight wins and seven from Custer. Reddick and Custer had a pit road confrontation during these playoffs and raced each other hard before Reddick used a crossover move to take the win for good.

“It sucks to come home second two years in a row. We will take it. We were a lot closer this year,” Custer said. “I am looking forward to next year and seeing what we’ve got.”

Bell has now lost two titles he was favored to win.

The title was the first for Reddick crew chief Randall Burnett.

“Best team I've ever been a part of, amazing group of guys, and amazing driver, too,” said Burnett.

Chase Briscoe won rookie of the year and said after the race Stewart-Haas Racing has not yet found enough funding to bring him back in 2020. Briscoe said he’s hopeful the organization can put something together because he has no other ride planned.