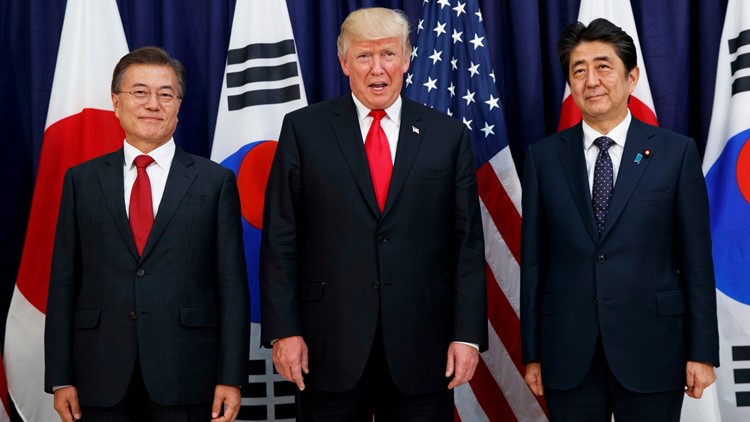 Photo by: AP
FILE - In this July 6, 2017, file photo, U.S. President Donald Trump, center, meets with Japanese Prime Minister Shinzo Abe, right, and South Korean President Moon Jae-in before the Northeast Asia Security dinner at the U.S. Consulate General Hamburg in Germany. In August 2019, Trump angered some Asian American voters after the New York Post reported that he mocked the accents of Moon and Abe at a fundraiser in the Hamptons. (AP Photo/Evan Vucci, File)

When Amanda Berg heard reports that President Donald Trump mocked the accents of the leaders of South Korea and Japan at a recent fundraiser, it brought back painful memories from her childhood.

Berg, a Korean American who grew up in Fort Collins, Colorado, recalled kids doing the "stereotypical pulling at the eyes and the mocking accent." It made her feel like she was a foreigner in her own community.

Berg, a registered Democrat, is among a growing and crucial bloc of Asian American voters leaning further to the left in the age of Trump, and his stunt, reported by the New York Post, angered her and many others.

"It empowers people who would be predisposed to doing that kind of thing anyway," said Berg, a high school English teacher in Denver. "And it makes it acceptable to be openly, increasingly discriminating."

Trump has used racist rhetoric to fire up his conservative base ahead of the 2020 election — most notably against four Democratic congresswomen of color. Telling them to "go back" to their home countries triggered widespread outcry last month, but his reported mocking of Asian accents garnered a more tepid reaction.

Some worry the frequency of Trump's racially offensive remarks makes them easier to shrug off, a concern that could weigh on an Asian American voting group that's only growing in power.

The Asian American voting-age population has more than doubled in the past two decades, leaping from 4.3 million in 1998 to 11.1 million in 2018 according to the U.S. Census Bureau. A majority of those new voters lean Democratic.

By 2016, some Asian ethnic groups that had leaned Republican shifted into the Democratic camp, said Natalie Masuoka, an associate professor of political science and Asian American studies at the University of California, Los Angeles. A larger share of Asian American Republicans voted for John McCain in 2008 than for Trump in 2016.

A Pew Research Center survey said 53% of Asian American registered voters in 1998 identified with the Democratic Party. That figure rose to 65% in 2017.

"They are adding more and more new voters to the electorate," Masuoka said. "Alongside Latino immigrants, they're important for candidates to mobilize."

The GOP, meanwhile, remains appealing to Asian Americans who are strongly anti-communist, as many are in Vietnamese communities. Some data also suggests that a large proportion of Filipinos and wealthy, higher-educated Chinese Americans are more likely to go Republican, Masuoka said. There is no solid answer for why, but religion is one often cited reason, she added.

But it may be hard for some to look past Trump's reported words.

RELATED: 10 Democrats have now qualified for the September debate

"He's willing to use Asian stereotypes, Asian accents in his public speeches," Masuoka said. "In that way ... the way Americans are talking about race is now shifting possibly back to what historically was effective before the civil rights revolution" — explicit and sometimes offensive talk about race.

The New York Post reported that Trump imitated South Korea President Moon Jae-in and Japanese Prime Minister Shinzo Abe, both close U.S. allies, at a fundraiser in the Hamptons this month. Trump used a fake accent to boast about Moon relenting in negotiations over the costs of U.S. military aid to South Korea and when rehashing talks with Abe had about trade tariffs, according to the newspaper.

Trump has imitated Asian people before. At an August 2015 campaign rally in Iowa, he talked about his ability to deal with Asian negotiators and used broken English, saying, "When these people walk into the room ... they say 'We want deal!'"

In the past, such comments have led to outrage.

In 1995, then-New York Sen. Alfonse D'Amato used a faux Japanese accent when discussing O.J. Simpson trial Judge Lance Ito, who is Japanese American, in a radio interview. The Republican senator's apology was criticized at the time by the Asian American Defense and Education Legal Fund.

"It was a time where even though we were very offended by the remarks, we thought it might make a difference to ask for an apology. But with President Trump, one doesn't expect that," said Margaret Fung, the group's executive director. "That's part of the way he speaks, the way he acts which is offensive. Unfortunately, it doesn't get the kind of attention that maybe it should."

A representative for the White House did not immediately respond Wednesday to a request for comment.

Trump supporters like Farhana Shah, of the Arizona GOP Asian American Coalition, however, say his personality is irrelevant. She praised Trump for creating jobs, passing a tax cut and keeping the country safe. Shah, who emigrated from Bangladesh in 2006 and is self-conscious at times about her own accent, also disagrees that his reported words were racist or done out of cruelty.

"He has a humorous attitude. He has a funny way of expressing things," Shah said. "Did he harm any political negotiations? Did the leaders (themselves) react to that? If not, then it didn't do any big harm. So why should I get offended?"

Shah has gotten into debates with those who question her support for Trump.

"President Trump might not speak very posh, but he is trying to resolve these problems," Shah said.

Associated Press Polling Editor Emily Swanson in Washington contributed to this report. Tang reported from Phoenix and is a member of the AP's race and ethnicity team.