Vanessa Bryant has given mourners at a public memorial for Kobe Bryant and their daughter Gianna an intimate portrait of her husband.

Thousands of mourners gathered to hear her speak at a sold-out Staples center in Los Angeles. Kobe and Gianna died along with seven others on Jan. 26 in a helicopter crash.

Vanessa Bryant was introduced by late night host Jimmy Kimmel and received a standing ovation by the crowd. The Celebration of Life began with a performance from Beyonce. Vanessa thanked her husband's fans for coming, saying "the outpouring of love and support that my family has felt from around the world has been incredibly uplifting."

She began her speech with remarks on her "baby girl," Gianna. The audience cheered her on as she fought back tears while telling the story of how Gianna would kiss her goodnight and good morning.

"She was an amazingly sweet and gentle soul," she described. "She knew how much her morning and evening kisses mean to me and she was thoughtful to kiss me every day."

"We loved each other so much," Vanessa Bryant added. "I miss her so much."

Vanessa also spoke of her daughter's intelligence and advocacy, saying she "would have most likely become the best player in the WNBA." In school, Gianna would write papers "defending women" and advocating for equal pay in the NBA and WNBA. "She would have made a huge difference in women's basketball," she said.

Vanessa went on to remember Kobe, calling her "soulmate" by the many nicknames she had for him.

"I couldn't see him as a celebrity, nor just an incredible basketball player," she said. "He was my sweet husband and father of our children. He was mine. he was my everything." Vanessa and Kobe Bryant have been together since Vanessa was 17 years old, and she said she was his first girlfriend.

Vanessa focused on how much Kobe loved his daughters, calling him the "MVP of girl dads." She described how he loved to watch romantic movies with them and put them to bed every night. The night before his death, he took his daughter Natalia to their favorite koi pond.

"I want my daughters to know the amazing father, husband and person he was," she said.

Kobe and Gianna were extremely close, and Vanessa said he loved being her basketball coach.

"God knew they couldn't be on this earth without each other. He had to bring them home to heaven together," she said, fighting back tears.

"May they both rest in peace and have fun in heaven until we meet again one day. We love you both and miss you forever and always." 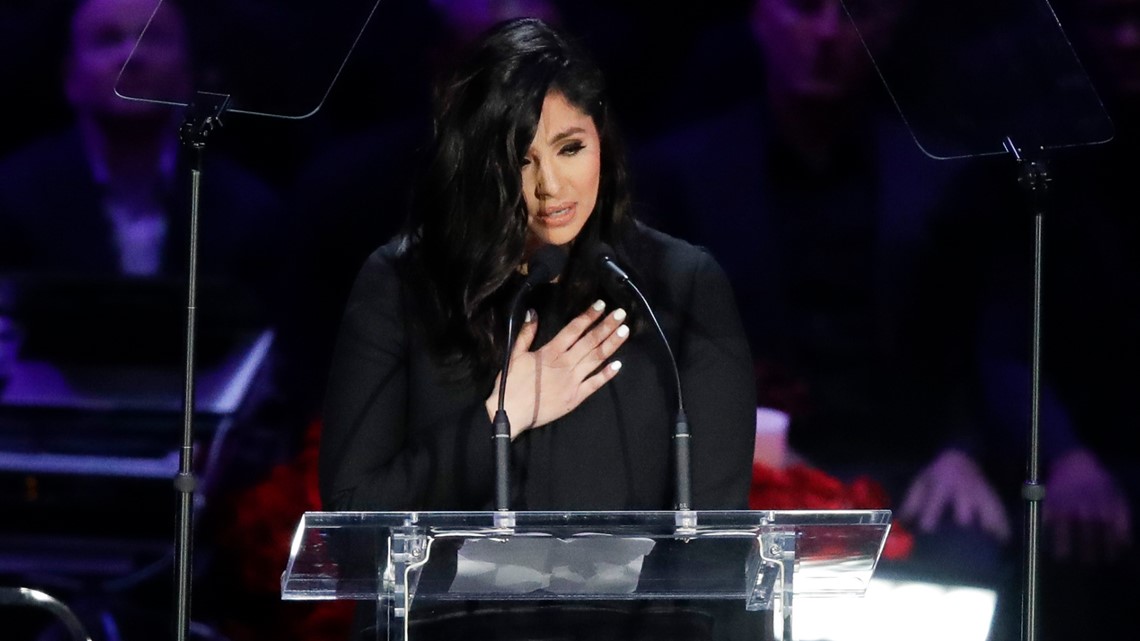 Vanessa Bryant is helped off the stage by former NBA player Michael Jordan after speaking during a celebration of life for her husband Kobe Bryant and daughter Gianna Monday, Feb. 24, 2020, in Los Angeles. (AP Photo/Marcio Jose Sanchez)
AP