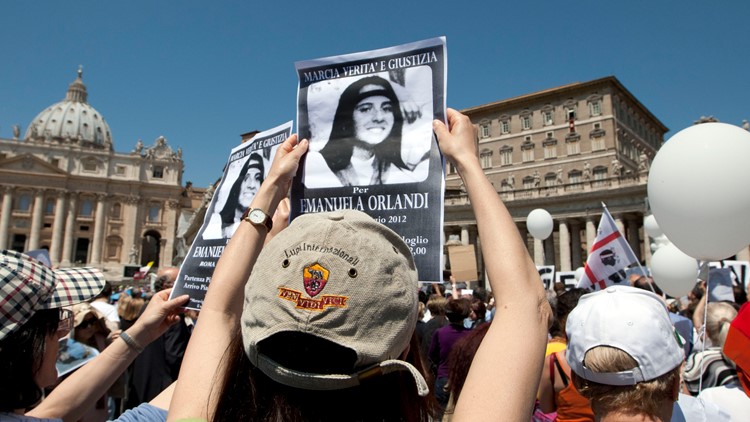 Photo by: AP
FILE - In this Sunday, May 27, 2012 file photo, people hold pictures of Emanuela Orlandi reading, "march for truth and justice for Emanuela" in St. Peter's square, at the Vatican. An expert for the family of a Vatican teenager who went missing in 1983 says there are thousands of bones in an underground space near a Vatican cemetery. Giorgio Portera, engaged by Emanuela Orlandi’s family, said the extent of the cache emerged Saturday when Vatican-appointed experts began cataloguing the remains discovered on July 13. Portera said skulls and bones appear to belong to dozens of individuals. The Vatican made no mention of the number but said analyses would resume on July 27. (AP Photo/Andrew Medichini, File)

VATICAN CITY (AP) — A genetics expert retained by the family of a girl who went missing in 1983 said Saturday that a cavernous underground space near a Vatican cemetery holds thousands of bones that appear to be from dozens of individuals, both "adult and non-adult."

The expert, Giorgio Portera, said the "enormous" size of the collection under the Teutonic College was revealed when Vatican-appointed experts began cataloguing the remains, which were discovered last week .

"We didn't expect such an enormous number" of bones and other remains which "had been thrown into a cavity," Portera said. "We want to know why and how" the bones ended up there.

Portera is working on behalf of the family of Emanuela Orlandi, a Vatican citizen who vanished at age 15 after she left her family's Vatican City apartment for a music lesson in Rome. What became of her is one of Italy's most enduring mysteries.

Some have theorized the girl was kidnapped in an unsuccessful ransom bid to win freedom for the Turkish gunman who shot and wounded Pope John Paul II in St. Peter's Square in 1981.

A Vatican statement Saturday made no mention of the number of remains in the newly discovered space near the Teutonic Cemetery but said the forensic work would resume on July 27.

Orlandi's family previously received an anonymous tip to search near the 19th century tombs of two German princesses in the tiny graveyard.

But when the Vatican opened the tombs recently at the family's request, they were empty. The Vatican said it didn't know why but indicated restoration work in the cemetery area in the 1960s and 1970s might be a reason.

Orlandi's family has also pressed the Vatican to open its archives so it can see any and all possible paper trails about the case.

Federica Orlandi, Emanuela's sister, said learning about the underground cache of bones was "obviously an emotional experience because I think my sister's bones could be there, but I won't think about it until we have the result."

With so many remains to study and analyze, it was unclear when results from the analyses would be available.

"Thousands of bones have been found," Portera said. "That's the point we are at. Thousands of bones. I can't say if it's 1,000 or 2,000, but there are really very many, and so we assume (there is) the presence of the remains of a few dozen people."

Asked about Portera's comments on the large number of bones, Vatican spokesman Alessandro Gisotti said in an email it was "absolutely normal that in an ossuary there is an elevated number of remains, above all in an ancient cemetery like the Teutonic (is). No surprise."

Gisotti said a large number of the bones, since they were so old, broke into fragments, many of them tiny, boosting the total number found.

Dolores Hinckley contributed to this report.