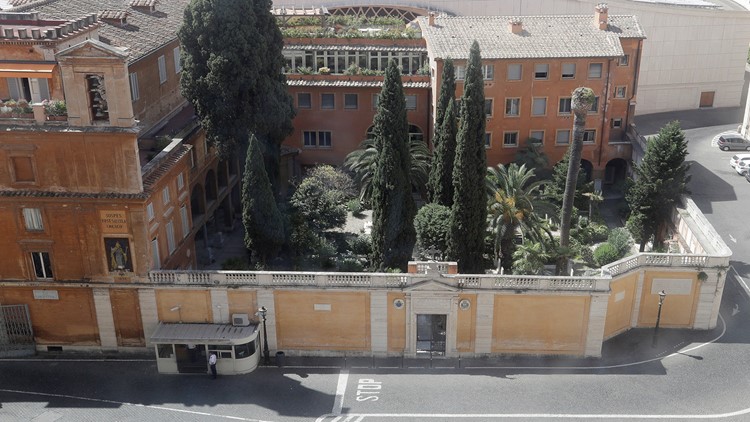 Photo by: AP
FILE - In this Wednesday, July 10, 2019 filer, a view of the cemetery of the Pontifical Teutonic College at the Vatican. The mystery over the 1983 disappearance of the 15-year-old daughter of a Vatican employee has taken yet another twist following excavations this week at a Vatican City cemetery. The Vatican said Saturday it had discovered two sets of bones under a stone slab. An official says the area was immediately sealed off and would be opened in the presence of forensic experts on July 20. (AP Photo/Gregorio Borgia, File)

Vatican mystery over missing girl deepens as bones are found

VATICAN CITY (AP) — The mystery of the 1983 disappearance of the 15-year-old daughter of a Vatican employee took yet another twist Saturday following excavations this week at a Vatican City cemetery. The Vatican said it had discovered two sets of bones under a stone slab that will be formally opened next week.

The new discovery came after Vatican on Thursday pried open the tombs of two 19th-century German princesses in the cemetery of the Pontifical Teutonic College in hopes of finding the remains of Emanuela Orlandi.

Orlandi’s family had received a tip that she might be buried there. But the tombs turned out to be empty, creating yet another mystery about where the dead princesses were.

The Vatican vowed to keep investigating and noted that any bones in the tombs might have been displaced during structural work carried out on both the college building and a cemetery near St. Peter’s Basilica in the 1800s and in more recent decades.

On Saturday, Vatican spokesman Alessandro Gisotti said further searches had centered on the areas adjoining the princesses’ tombs. He said investigators had located two ossuaries, or sets of bones, under a stone slab manhole covering inside the Teutonic college itself.

He said the area was immediately sealed off and would be opened in the presence of forensic experts on July 20.

Gisotti added that the bones were found in two holes carved out of a large stone that was covered by an old pavement stone a few meters (yards) behind the princesses’ tombs. That area is now technically inside a building of the Teutonic College, after expansion work on the building encroached onto the cemetery field.

The last recorded structural work done on the building and the cemetery was in the 1960s and 1970s. Orlandi disappeared in 1983.

She vanished after leaving her family’s Vatican City apartment to go to a music lesson in Rome. Her father was a lay employee of the Holy See.

Her case has been one of the enduring mysteries of the Vatican, kept alive by the Italian media and a quest by her brother to find answers. Over the years, her disappearance has been linked to everything from the plot to kill St. John Paul II to the financial scandal of the Vatican bank and Rome’s criminal underworld.

A demonstrator wears a shirt with writing in Italian reading "Please give the justice dossier for Emanuela", center, as two others wear shirts with the image of Emanuela Orlandi and writing reading "The truth sets you free", on the outskirts of the Vatican, in Rome, Thursday, July 11, 2019. The Vatican will reopen a tomb near St. Peter's Basilica after further investigation into the case of the 15-year-old daughter of a Vatican employee, Emanuela Orlandi, who disappeared in 1983. (AP Photo/Andrew Medichini)
AP

The last major twist in the case came in 2012, when Italian forensic police exhumed the body of a reputed mobster from the crypt of a Roman basilica in hopes of finding Orlandi’s remains as well. The search turned up no link.

Last year, bones were found underneath the Vatican’s embassy to Italy in Rome. Italian media immediately speculated the remains could belong to Orlandi or another girl who went missing at around the same time. But forensic tests showed the bones long predated their disappearances.

Pietro Orlandi, the missing girl’s brother, has long demanded the Vatican give the family full access to all information it has about his sister’s disappearance.

The family’s lawyer, Laura Sgro, said Saturday she had been informed of the discovery of the bones and that the family was pleased that the investigation was continuing.

“Our interest is to actively cooperate with Vatican prosecutors to understand better how those two tombs could have been empty,” she said in a statement. “If we understand together, it’s better.”

In 2017, an Italian investigative journalist caused a sensation when he published a five-page document that had been stolen from a locked Vatican cabinet that suggested the Holy See had been involved in Orlandi’s disappearance. The Vatican immediately branded the document a fake, though it never explained what it was doing in the Vatican cabinet.

The document was purportedly written by a cardinal and listed supposed expenses used for Orlandi’s upkeep after she disappeared.

Gisotti said this week that the Holy See “has always shown attention and closeness to the suffering of the Orlandi family and in particular Emanuela’s mother” and that its decision to excavate the Teutonic cemetery at the family’s request was evidence of that attention.