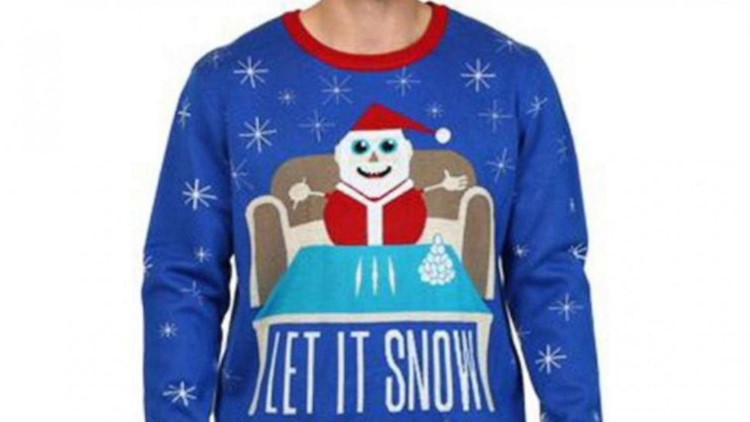 Walmart apologizes for Christmas sweaters that featured Santa and cocaine

Santa typically decides who is naughty or nice, but a Christmas sweater recently depicted him as the one who might be earning the coal this holiday season.

Walmart's Canadian website had been offering a unique sweater through a third party seller. According to The Washington Post, the sweater featured a "bug-eyed Santa Claus seated in front of three white lines that appeared to be cocaine."

The text on the sweater? "LET IT SNOW."

The newspaper says it was pretty obvious the sweater was making a drug reference. That's because the product description actually included a line about how Santa really likes to "savor" the white, powdery "grade A, Colombian snow."

RELATED: Man gets stuck in chimney while trying to sneak into a home

CNN says Walmart has since apologized and removed the item from its website.

"These sweaters, sold by a third-party seller on Walmart.ca, do not represent Walmart's values and have no place on our website," Walmart told CNN on Saturday. "We have removed these products from our marketplace. We apologize for any unintended offense this may have caused."

The cable network explained third-party sellers can make products available through the Walmart Marketplace portal. But, the retail giant decides whether to approve sellers.

It's not the only controversy this holiday season. Earlier this month, Amazon removed third-party "Christmas ornaments" and other merchandise that had images of Auschwitz on them.