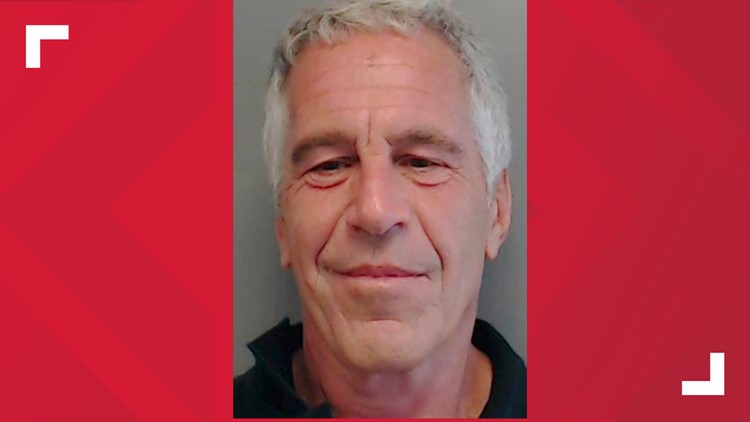 Photo by: AP
FILE - This July 25, 2013, file image provided by the Florida Department of Law Enforcement shows financier Jeffrey Epstein. Federal prosecutors, preparing for a bail fight Monday, July 15, 2019, say evidence against Epstein is growing “stronger by the day” after several more women contacted them in recent days to say he abused them when they were underage. (Florida Department of Law Enforcement via AP, File)

Prosecutors say authorities found 'piles of cash,' 'dozens of diamonds' and an expired passport with Epstein's picture and a fake name during a raid of his mansion.
Author: Larry Neumeister (Associated Press)
Published: 6:23 AM EDT July 15, 2019
Updated: 6:44 PM EDT July 15, 2019

Two Jeffrey Epstein accusers urged a judge Monday to keep the wealthy financier behind bars until he goes on trial on federal charges that he sexually abused underage girls.

The women stood just feet from where Epstein was seated in his blue jail outfit as they asked a federal judge to reject a request by Epstein's lawyers that he remain under house arrest in his $77 million Manhattan mansion until trial on conspiracy and sex trafficking charges.

Courtney Wild, an unnamed victim in the 2008 lawsuit against the Department of Justice for the secret plea deal that allowed Epstein to avoid similar charges, spoke for the first time in court with a fellow accuser.

Wild said she was sexually abused by Epstein in Palm Beach, Florida, when she was 14.

"He's a scary person to have walking the streets," she said.

Annie Farmer said she was 16 when she met Epstein in New York.

"He was inappropriate with me," she said. She did not elaborate.

The Associated Press doesn't name alleged victims of sexual abuse without their consent. Through their lawyers, both Farmer and Wild said they were willing to be publicly identified.

Judge Richard M. Berman said he'll rule Thursday whether Epstein can be freed on bail, but he noted at the outset of a two-hour hearing there was a presumption in sex trafficking cases involving juveniles that the defendant will remain locked up.

He also rescinded his decision last week to let Epstein reveal his finances under seal, criticizing a one-page "asset summary" in which Epstein claimed $559 million in assets, including $56 million in cash, $112 million in equities, $195 million in hedge funds and private equity and $180 million in property.

Epstein seemed animated Monday, writing notes to his attorneys and leaning forward with his hands folded. He looked directly at each of his accusers before they spoke.

Assistant U.S. Attorney Alex Rossmiller said the government's case is "getting stronger every single day" since Epstein was arrested July 6 as he arrived at a New Jersey airport from Paris on his private plane.

During a raid at Epstein's Manhattan mansion following his arrest, Rossmiller said, investigators found "piles of cash," ''dozens of diamonds" and an expired passport with Epstein's picture and a fake name in a locked safe.

"How many safes are there in so many other locations like these?" Rossmiller asked.

In this courtroom artist's sketch, defendant Jeffrey Epstein, center, sits with attorneys Martin Weinberg, left, and Marc Fernich during his arraignment in New York federal court, Monday, July 8, 2019. Epstein pleaded not guilty to federal sex trafficking charges. The 66-year-old is accused of creating and maintaining a network that allowed him to sexually exploit and abuse dozens of underage girls from 2002 to 2005. (Elizabeth Williams via AP)
AP

He called the well-connected Epstein, 66, a flight risk and a danger to the community, saying he should remain incarcerated until he is tried on charges that he recruited and abused dozens of underage girls in New York and Florida in the early 2000s.

Epstein's lawyer, Martin Weinberg, said his client has not committed crimes since pleading guilty to charges of soliciting a minor for prostitution in Florida in 2008 and that the federal government is reneging on a 12-year-old plea deal not to prosecute him.

Epstein had demonstrated that he "disciplined himself," Weinberg said, by not engaging in any crimes since the Florida deal, in which he agreed to submit himself to sex offender registration procedures in multiple states.

The "14-year gap is an elegant rebuttal" to expectations that he would re-offend, Weinberg said. "It's not like he's an out-of-control rapist."

But the judge later noted he had read literature related to sex offenders that indicated the chance of a sex offender committing a new crime grew over time.

In addition to the charges in the indictment, prosecutors are also reviewing dozens of electronic files seized during the raid on Epstein's New York residence, saying they have found even more photos than the trove of pictures of nude and seminude young women and girls they had reported prior to a court hearing a week ago.

Rossmiller said the pictures included at least one woman who has identified herself as one of Epstein's victims.

Prosecutors said they believe Epstein might have tried to influence witnesses after discovering that he had paid a total of $350,000 to two individuals, including a former employee, in the last year. That came after the Miami Herald reported the circumstances of his state court conviction in 2008, which led to a 13-month jail term and his deal to avoid federal prosecution.

Weinberg defended the payouts, saying sending money to an employee or a friend "is simply not witness tampering." He added that even if his client knew scrutiny was intensifying of his behavior in the early 2000s, he never tried to leave the country, although he now considers his primary residence the Virgin Islands.

Rossmiller, though, said prosecutors went to great lengths to ensure no word leaked out about their months-long investigation because they feared he would flee. He also said the probe did not stem from interactions with federal prosecutors in Florida.

"He is in a grave position, and he has every motive and means to flee," the prosecutor said.

Labor Secretary Alexander Acosta resigned last week following renewed criticism over the 2008 plea deal with Epstein that he oversaw as the U.S. attorney in Miami.