From the Iowa State Capitol to the Freedom Rock in Menlo, Iowans observed the holiday by honoring those who have fallen both abroad and at home. 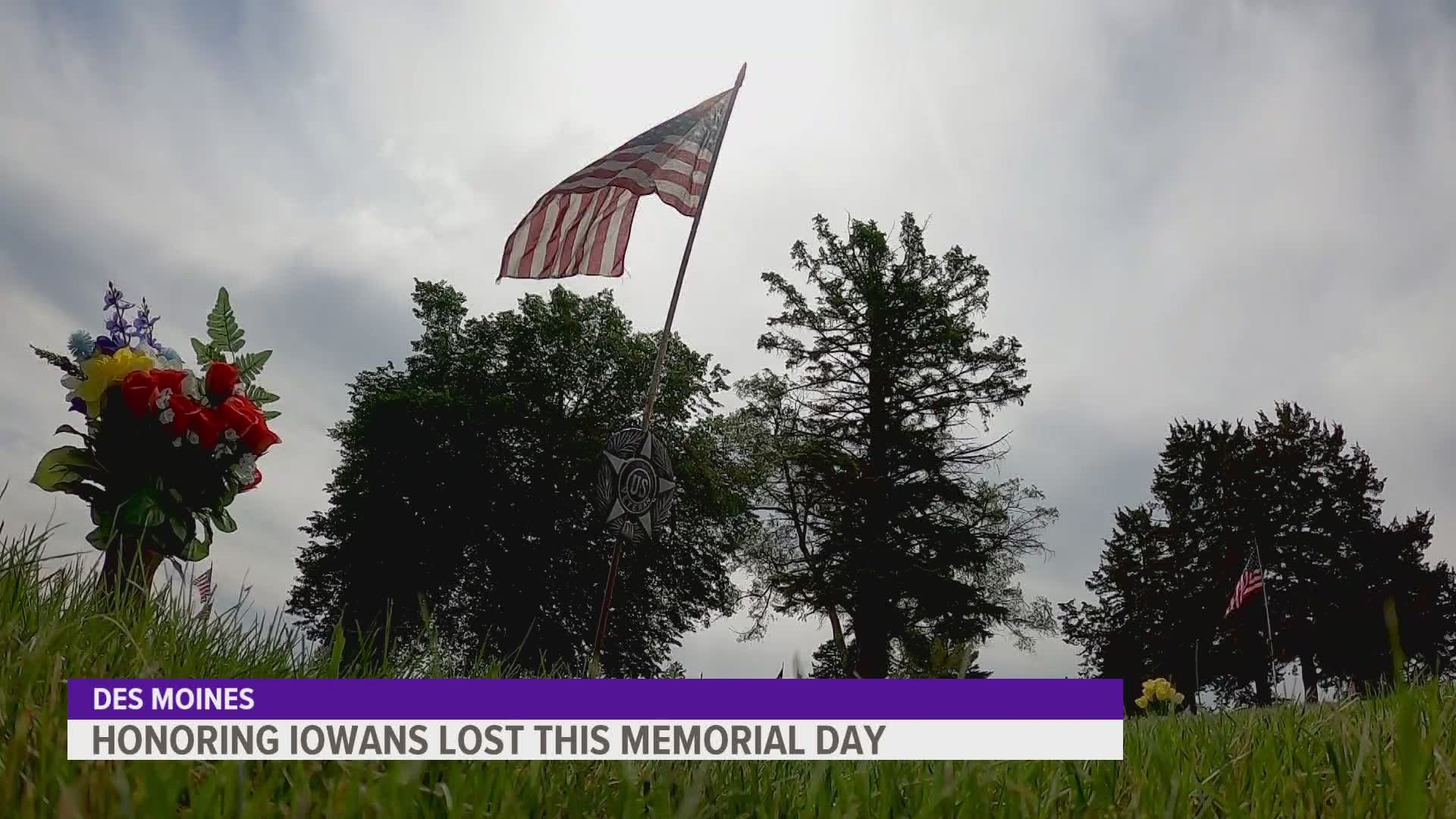 IOWA, USA — As the COVID-19 pandemic continues to dwindle across the United States, Americans gathered Monday to observe Memorial Day and honor the lives lost across the seas and here at home.

"To those who mourn a loved one today, Jill and I have some idea how you're feeling. Our losses are not the same, but that black hole you feel in your chest as if it's going to suck you into it, we get," President Joe Biden said during his remarks at Arlington National Cemetery. "I know the incredible pride you felt seeing your loved one wear the uniform of our country, and the pride they felt wearing it. "

Here in central Iowa, several ceremonies and other events were held in recognition of Iowans who served in the military.

While the events were unique in their own right, each carried the same message of remembrance and respect for those who gave it all in sacrifice for a better life for all Americans.

RELATED: 'He was just never the same': On Memorial Day 2021, father remembers son's battle with PTSD

A once-a-year workout to honor one fallen naval lieutenant

Members of the North Ankeny Cross Fit Gym got in a workout Monday morning in the name of Michael Murphey.

The "Murph" workout is in honor of the Navy lieutenant who lost his life in 2005.

"It's just a great way to recognize what they've sacrificed for us and anybody can do it," said Lyle DeWild, owner of the gym. "It's scalable. But new people, Cross Fit veterans just get together once a year and do this workout together."

The workout starts and ends with a one-mile run with pull-ups, push-ups and air squats in between. Some throw on a weighted vest for extra difficulty.

Wreaths laid at the Capitol for Iowa veterans

Dozens of Iowans gathered at the Iowa State Capitol to lay wreaths in honor of fallen soldiers who served in Vietnam and Korean Wars as well as those who served in Desert Storm, Iraq and Afghanistan.

"We honor those that were not able to make it home. America has a story, history of losing men and women in battle," said Comdt. Ryan Lincoln with the Larry Nehring Detachment #103 of the Marine Corps League. "It's important every year on Memorial Day that we honor them with an appropriate ceremony."

Some paid their respects at the Iowa Vietnam War monument.

A total of 867 Iowans lost their lives or remain missing after serving their country in the Vietnam War, according to the Iowa Department of Veterans Affairs.

For those who never made it out of their uniform

The Beaverdale Veterans of Foreign Wars Post recognized their brothers and sisters in arms who never made it home in a touching tribute at Merle Hay Funeral Home.

The ceremony gave more context to Memorial Day's origins. Americans have observed Memorial Day since 1868. At first, it was to honor those who died in defense of the United States during the Civil War.

"Our flag does not fly because the wind moves it. It flies with the last breath of each soldier who died protecting it," Charlet said.

The Freedom Rock just south of Menlo is decorated each year for Memorial Day. Ray "Bubba" Sorensen paints the rock each year using the ashes of veterans in the paint. He's been painting the rock since 1999.

Sorensen also tours the entire state painting rocks like the original one. In October 2020, he had 94 rocks done.

Credit: Eric Gooden/WOI
The Freedom Rock in Menlo is painted using the ashes of veterans. The work on the 12-foot tall, 60-ton boulder started in early May and finished just in time for the holiday. (May 31, 2021)

Sorensen started the Freedom Rock Foundation to help him maintain his murals across the state. More information about his tour can be found by clicking/tapping this link.