The 15th MEU and the ARG leadership determined that there was little probability of a successful rescue after an extensive 40-hour search. 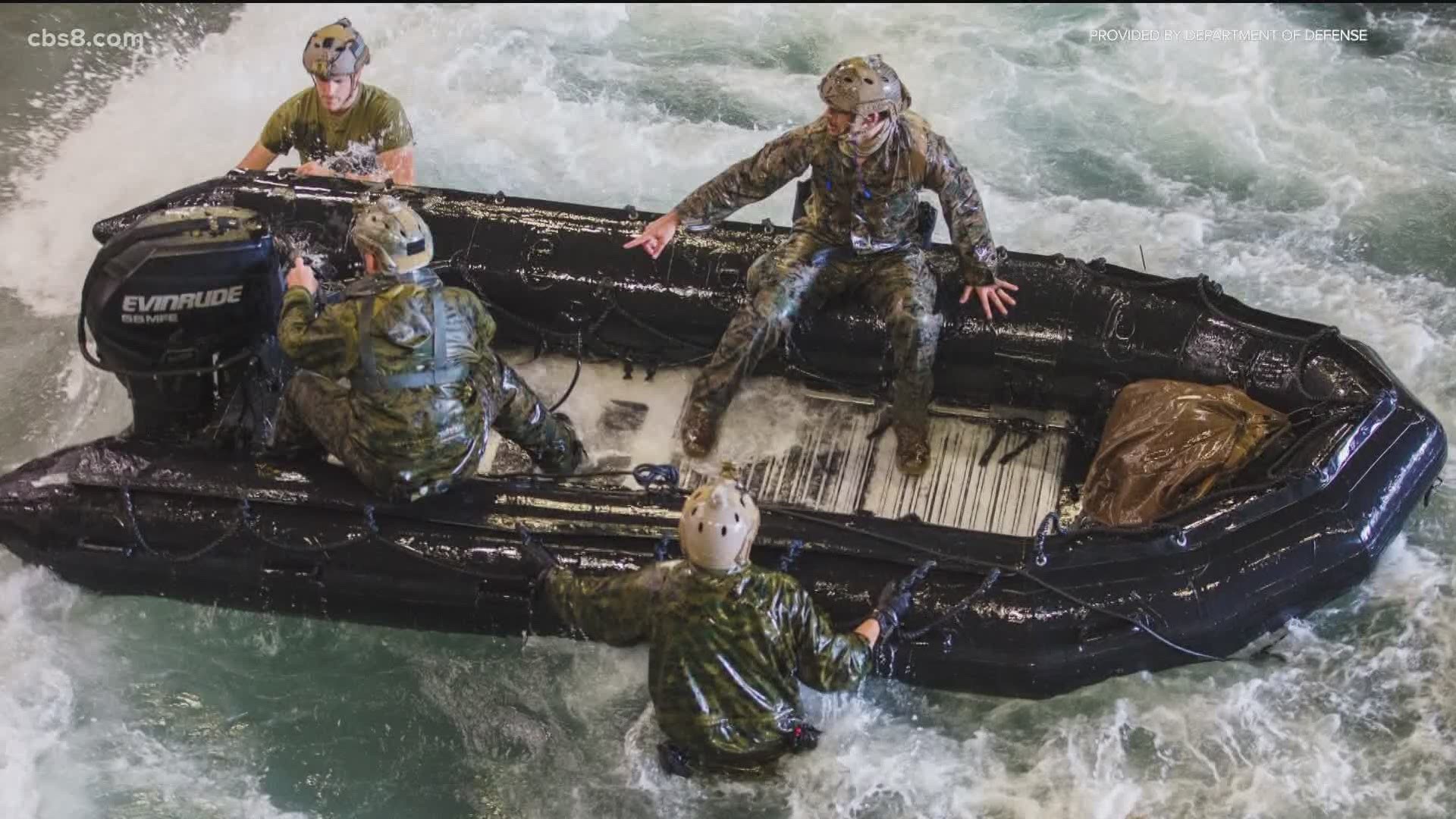 SAN DIEGO COUNTY, Calif — After more than 40 hours, military officials ended their search and rescue operation late Saturday evening for the eight service members who went missing on Thursday during a training exercise off the coast of San Diego. The Marines said it may be the worst accident involving an amphibious assault vehicle since it entered service nearly 50 years ago.

Their AAV was heading back to a nearby Navy warship when it began taking on water and sank approximately a half-mile off San Clemente Island. Eight Marines were rescued, but one later died at a San Diego hospital. Military personnel from the Navy, Coast Guard and Marines searched approximately 1,000 square nautical miles but were unable to find the missing service members.

“To not have all the answers right now is heartbreaking,” said Lt. Gen. Karsten Heckl, Commanding General of the I Marine Expeditionary Force in a social media post. “Our hearts break for their friends and families. We pray they find comfort during this difficult time."

According to a GoFundMe page, loved ones identify Wesley Rodd as one of the missing marines. News 8 has learned he recently became a father.

Another GoFundMe page, identifies Chase Sweetwood as the marine who was killed in the accident. His aunt wrote that Sweetwood died the day before his 19th birthday,

Five of the Marines who were rescued were back on their home warships as of Sunday. Two others were recovering in the hospital, including Dallas Truxal of Indiana.

"Since he was a little kid I can remember doing birthday cakes for him and he wanted it to have Marine decorations on it when he was 7 or 8. He has always dreamed of being a Marine," said Catrina Tomamichel, Truxal’s aunt.

Truxal was in the Intensive Care Unit immediately after arriving at the hospital but has since improved.

“The nurse called my sister and said, 'I asked him if he can hear me squeeze my fingers' and he squeezed her fingers,” said Tomamichel.

By Saturday he was alert and talking to his parents, who are now by his bedside. Truxal’s family said their thoughts are with the families of the Marines and Sailor who are still missing.

A release sent on Sunday by the 15th Marine Expeditionary Unit (MEU) stated that efforts will now turn to finding and recovering the missing Marines and sailor.

All eight service members are presumed deceased. The 15th MEU and the ARG leadership determined that there was little probability of a successful rescue given the circumstances of the incident.

“It is with a heavy heart, that I decided to conclude the search and rescue effort,” said Col. Christopher Bronzi, 15th MEU Commanding Officer. “The steadfast dedication of the Marines, sailors, and Coast Guardsmen to the persistent rescue effort was tremendous.”

Over the course of the three-day at-sea search, more than 1,000-square-nautical-miles were searched by Marine Corps, Navy, and Coast Guard helicopters, ships, and watercraft.

“Our thoughts and prayers have been, and will continue to be with our Marines’ and sailor’s families during this difficult time,” said Bronzi. “As we turn to recovery operations we will continue our exhaustive search for our missing Marines and sailor.”

Assisting the team in recovery efforts is the offshore supply vessel HOS Dominator, as well as Undersea Rescue Command, utilizing their Remotely Operated Vehicle (ROV) to survey the seafloor.

All of the victims' next-of-kin had been notified as of Sunday. The names of the deceased troops are expected to be released within the next 24 hours.

In total, 15 Marines and one sailor had participated in the exercise.

"The amphibious assault vehicle (AAV) they were riding in began to take on water and sank," according to a MEF press release.

The Marines are expected to focus their recovery effort on the area near where the AAV sank. They said the 26-ton vehicle is several hundred feet underwater, which makes it inaccessible to divers.

The amphibious vehicle went down more than 1,000 yards from a beach on the northwest side of San Clemente Island, Osterman said.

"It's really below the depth that a diver can go to," Osterman told reporters.

As a precaution, the Marines pulled all its AAVs worldwide from service until investigators determine what went wrong. The tank-like vehicle is used to transport Marines from warships to shore.

"We're praying for them and to remember that their men and women, their children, their spouses they're heroes no matter what,” said Tomamichel.

The incident will be the subject of an exhaustive investigation, according to USMC officials.

All of the Marines involved were assigned to the 15th Marine Expeditionary Unit, based out of Camp Pendleton.

San Clemente Island is one of the eight islands that make up the Channel Islands archipelago.

The island is owned and operated by the U.S. Navy and is part of Los Angeles County. It is administered by Naval Base Coronado. 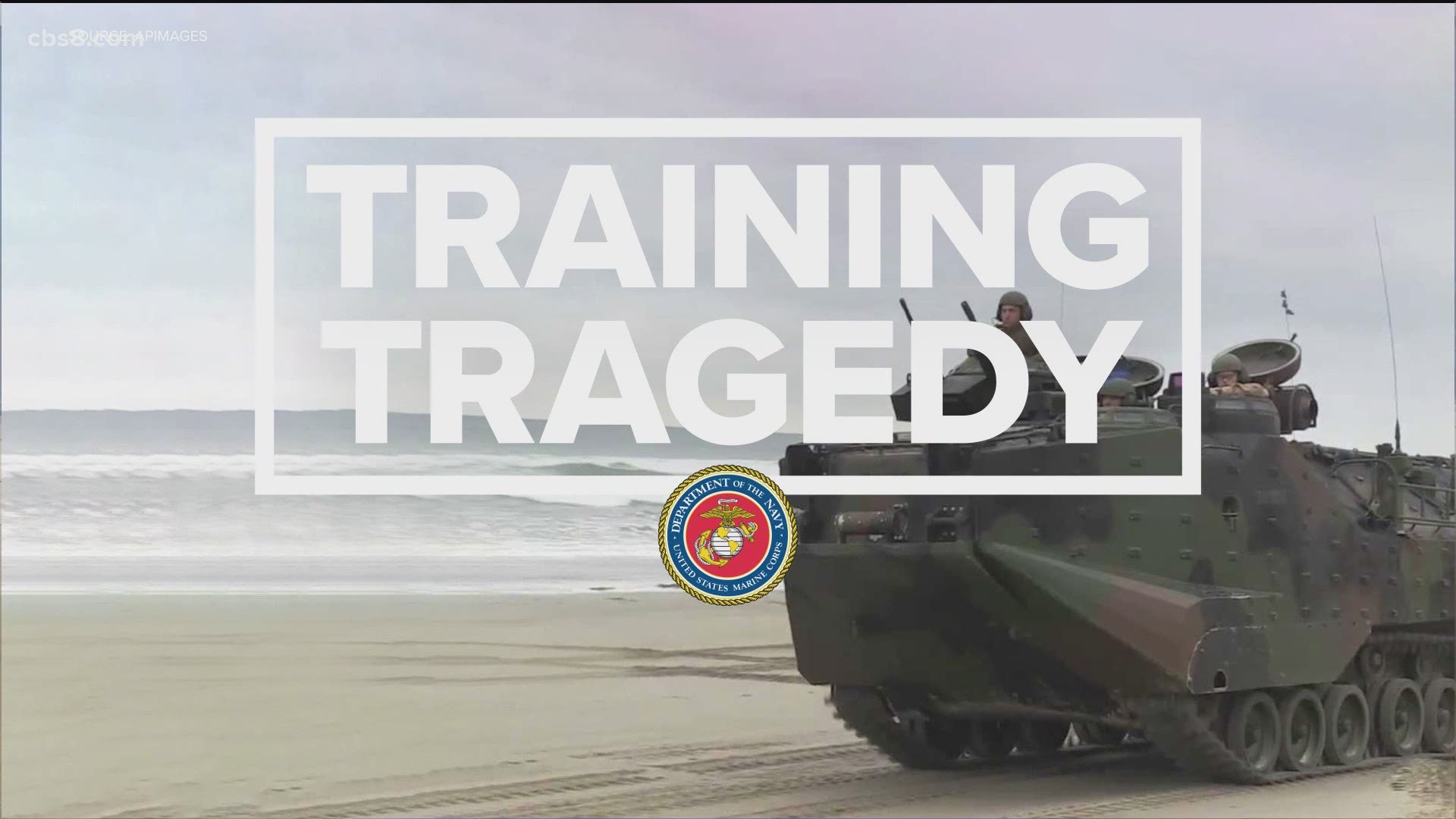