Nearly 8,500 people in Kent County experienced homelessness in 2018, according to the Coalition to End Homelessness. 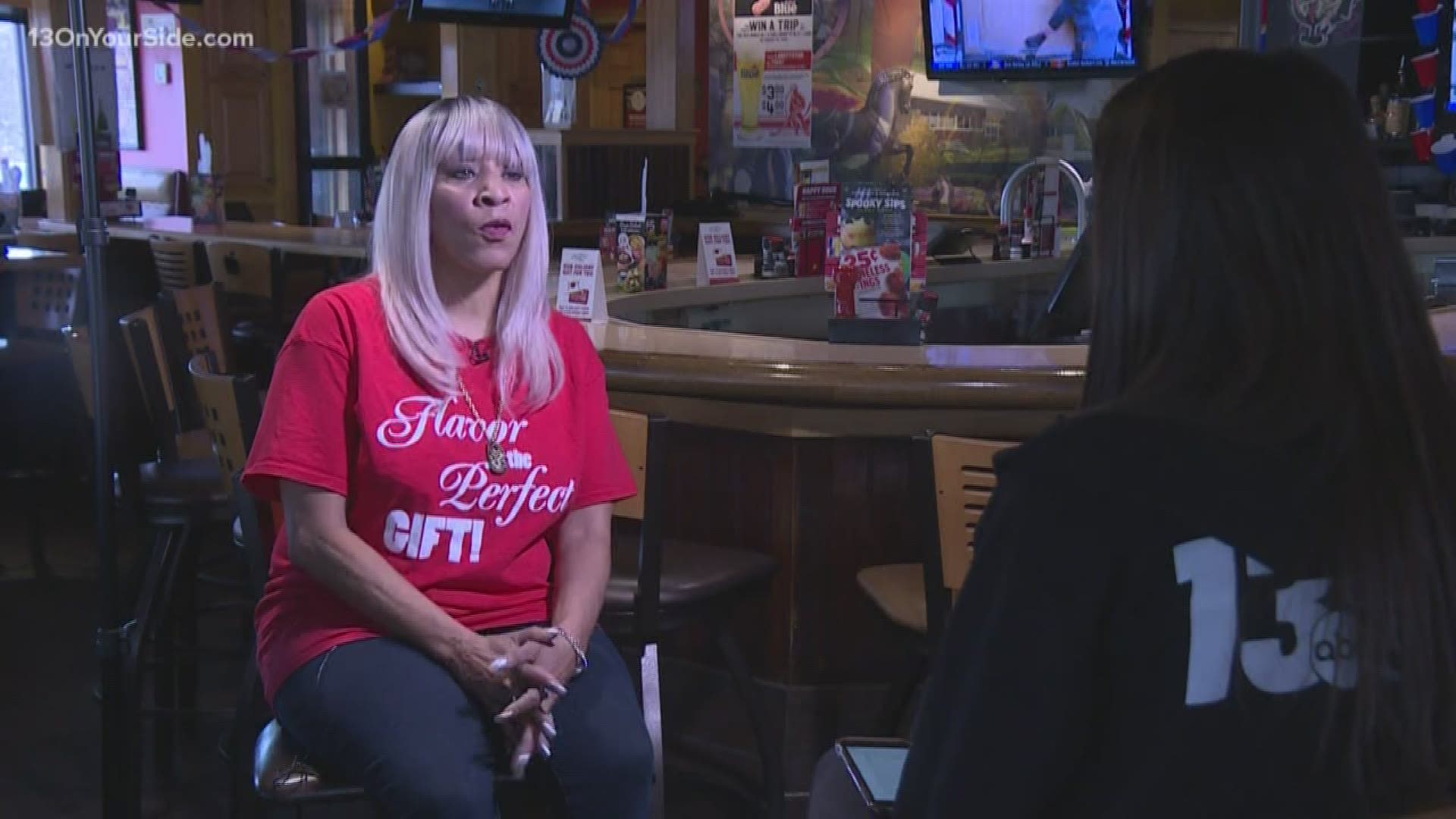 As we head into the week of Thanksgiving, we’re reflecting on the work of local organizations, that are changing people’s lives in the community.

Charlene Donaldson, a hostess at Applebee’s, is one of the people who have benefited from Mel Trotter’s programs.

“She treats each guest, you know every employee, like they’re family,” said Lesley Morey, the Applebee’s general manager. “I mean she's walked out of the store to give a customer a hug because she didn’t say goodbye to them.”

To Charlene, it’s much more than just a job. It’s how she got her life back.

“I've been on drugs on and off for 30 years, I've been through 10 treatment centers,” Charlene said. “I was on alcohol, smoking marijuana, smoking crack.”

She’s from Michigan, but up until five years ago, she lived in Mississippi.

“I was buying a house and everything and drugs got in the way,” Charlene said. “So I stopped working, couldn't pay the bills. And there was domestic violence in Mississippi, so I came back.”

The bills didn't get any easier to pay, so she would stay with her daughters.

“One day they told me that my granddaughter was pregnant," Charlene said. “I took a look at myself, I'm like wow, if I'm gonna be a great grandmother I can't keep doing this to myself, because I was living a double life.”

When she was ready, she turned to Mel Trotter's Step-Up recovery program.

“That's a 90-day program,” Charlene said. “You can go to the next program which is job readiness.”

Mel Trotter helped her create a resume, which was something she never had before.

“Part of our job training program in partnership with the businesses around the community is to help individuals develop those soft skills that they need, to not only get a job, but to keep a job,” said Dennis Van Kampen, the CEO of Mel Trotter.

“I knew that she'd had a tough life, you know that she'd struggled with addiction of some type, for most of her adulthood, which, that's a tough thing to kick,” Morey said.

But Charlene graduated from Mel Trotter's program, and she’s been two years sober since October.

“This was my first stop, coming out the treatment center,” Charlene said. “I came here, and Mr. Les (Morey) hired me on the spot.”

According to Morey, once he saw her interacting with people, he knew she'd be a great addition to the restaurant.

“That kind of opened my eyes to see well, she's not the only one that's like this. A lot of other people could use a second chance,” Morey said.

She's now able to have her family, consisting of four kids, 14 grandkids and two great-grandkids, stay at her very own apartment.

“If we provide people with income, if we help them find housing, and if we build relationships, there is no reason why Grand Rapids couldn't solve homelessness,” Van Kampen said.

The majority of Mel Trotter’s yearly funding comes in these last two months. Ninety percent of its money comes from individuals.

If you would like to learn more about the programs offered, make a donation, or see how you can help, head to Mel Trotter’s website. 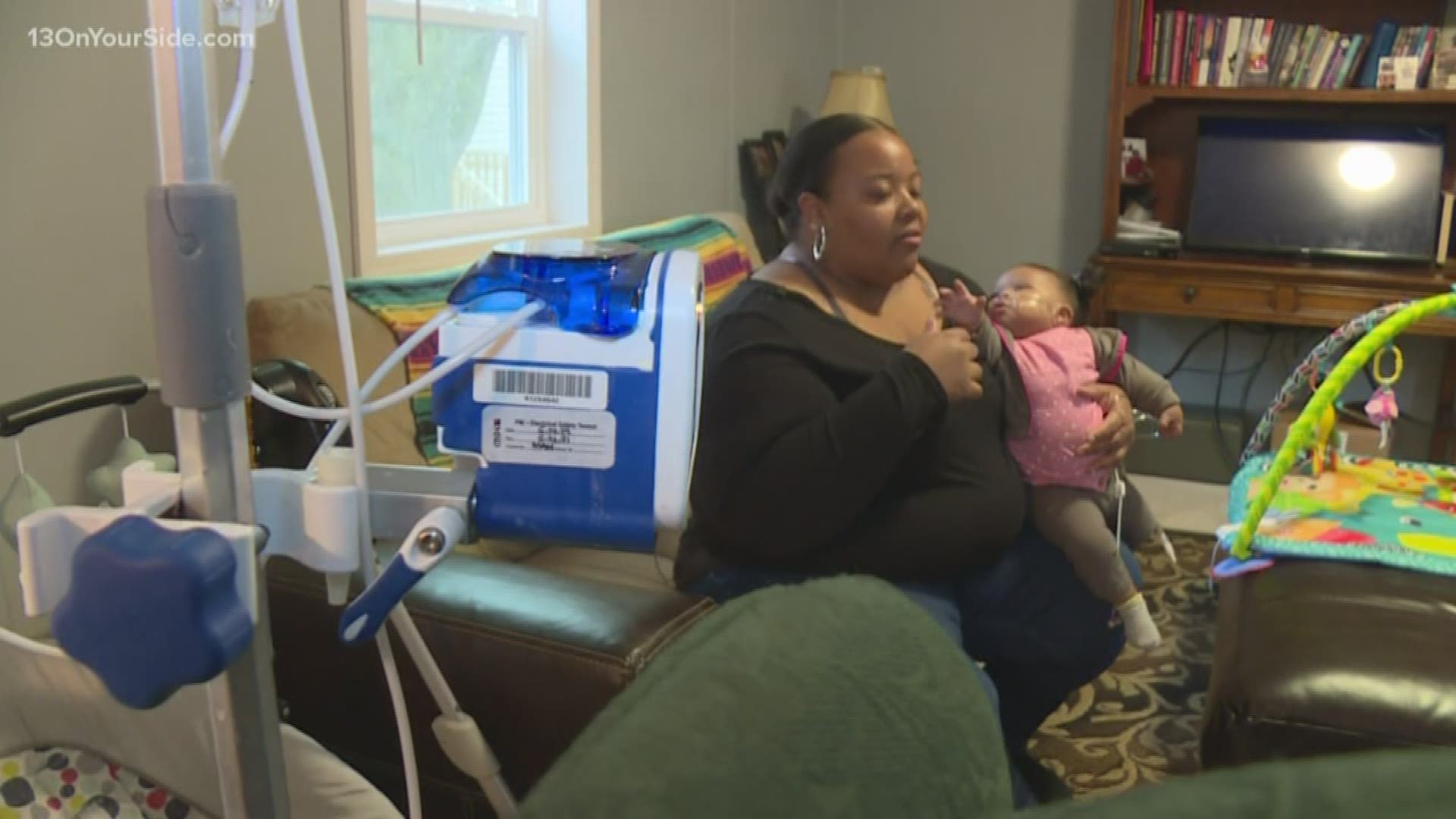 Maria Lowery spends her days taking care of her 3-year-old son, Hezekiah, and 1-year-old daughter, Niamaia. Her daughter, specifically, has been a fighter from the beginning.

"She was 3 pounds, 9 ounces when we left the hospital," Maria said. "She has down syndrome, and with that came a lot of health complications, some lung conditions, a heart condition.”

Every day, Niamaia is hooked up to an oxygen machine for treatments and takes a series of medications.

Niamaia is also completely tube-fed through a port on her stomach, which became necessary after discovering her silent aspiration condition.

"She gets five feedings a day out of this, and it goes for about an hour," Maria said. "So she's hooked up to that for five hours out of her day."

Maria cleans the tube twice a day and redoes all the bandages. Collectively, she spends about 10 hours a day caring for her daughter. Thankfully, Niamaia shares her mom's resilience.

“It's a lot to deal with all day, but you know I'm just grateful that it's not worse because this time last year it was really, really bad," Maria said. "On the 1st of December is when our battle with homelessness started.”

Maria Lowery was an insurance agent in Southern California, and after her grandma died, she decided to move back to Michigan with her son. Although she was closer to other family members, she didn’t get the stability she was seeking.

“I had a job interview two days after I got here for another insurance agency, but I was heavily pregnant," Maria said. "I ended up not being able to get that job, and I applied at everything in between.”

She and her son were staying with a friend, and one thing happened after another.

"We actually got the eviction notice on the first of November, but our thought process was, we still have a month before the baby gets here,” Maria said.

A week later, she went to a doctor's appointment and found out Niamaia had stopped growing. She needed to give birth that day.

After they were released from the hospital, there wasn't much time before they were forced out of the apartment, without another place to go.

Meanwhile, Niamaia was in and out of the hospital.

“Everything emerged, once we became homeless," Maria said. "I found out about this silent aspiration week one, I found out about her lung conditions week three. I found out about how severe the damage to her lungs was, she has chronic lung disease, and she's had it since she was five weeks old. Her heart caused a lot of that damage."

A social worker at Helen DeVos Children's Hospital reached out to The Salvation Army, which paid for them to stay in a Hawthorn Suites hotel for a few days. Then Maria began receiving help from Family Promise of Grand Rapids and it's Pathway Home Initiative.

“Families have their own private room, Mel Trotter gets to provide some of those ancillary services, they are dental and medical, they provide food," said Kate O'Keefe, the director of development and community engagement at Family Promise. "Then Family Promise provides that case management.”

From Mel Trotter, Maria and her two kids went to The Deborah House, which is a safe haven for single or pregnant moms. Then, Maria got into Family Promise's Partners in Housing program.

“My mom was dealing with homelessness in a different way, she was actually staying with a relative," Maria said. "So, we partnered together.”

As part of the program, Family Promise buys and restores manufactured homes for $10,000 to provide affordable places for families to live.

Not only does the Lowery family get to call it home, but it will soon be theirs.

“We then get a family into that home, and that family only has to pay the lot rent,"
O'Keefe said. "They walk through our programming, and after nine months that family gets the title to the home.”

In addition to the massive weight off her shoulders, Maria said pulling into her own driveway makes her heart full. And it means even more, for her kids.

For a family who's grown accustomed to fighting, this victory will lead to more.

“I promised myself that at the beginning of the year, we will not spend another birthday, another holiday, the way we spent the one's last year,” Maria said.

When it comes to Niamaia, she is on the road to recovery, eventually allowing her to go to daycare, so Maria can continue her education and return to work.

Family Promise helps almost 1,000 people in Kent County each year, and 90% of its families find a new home. The organization has supported around 4,000 kids.

The organization also relies heavily on private donations, and this is a critical time of year for those donations. If you'd like to help or learn more about its programs, head to Family Promise's website.

Taking a closer look at the issue as a whole, homelessness is increasing in West Michigan.

Family homelessness numbers increased by nearly 8% from 2017 to 2018. Currently, more than 100 families are on the waiting list for shelter in Kent County. One of the biggest problems is the shortage of affordable housing.

"There are increases in the rental amounts and increases in the amount that people need to pay for new housing," said Wende Randall, the director of the Kent County Essential Needs Task Force. "But we're not seeing increases in wages across the board to keep pace with that. So we do see more families and people of color at risk of or experiencing homelessness than would be representative of our community."

Fifty-two percent of people who had one or more experiences of homelessness in 2018 reported living within three zip codes. Those are 49503, 49504, and 49507. There are several factors to consider, including median income, increased cost of housing and location of the largest shelters, all within those areas.