A one-on-one interview with Peter Meijer, a Republican who is running for a seat in the U.S. Congress. 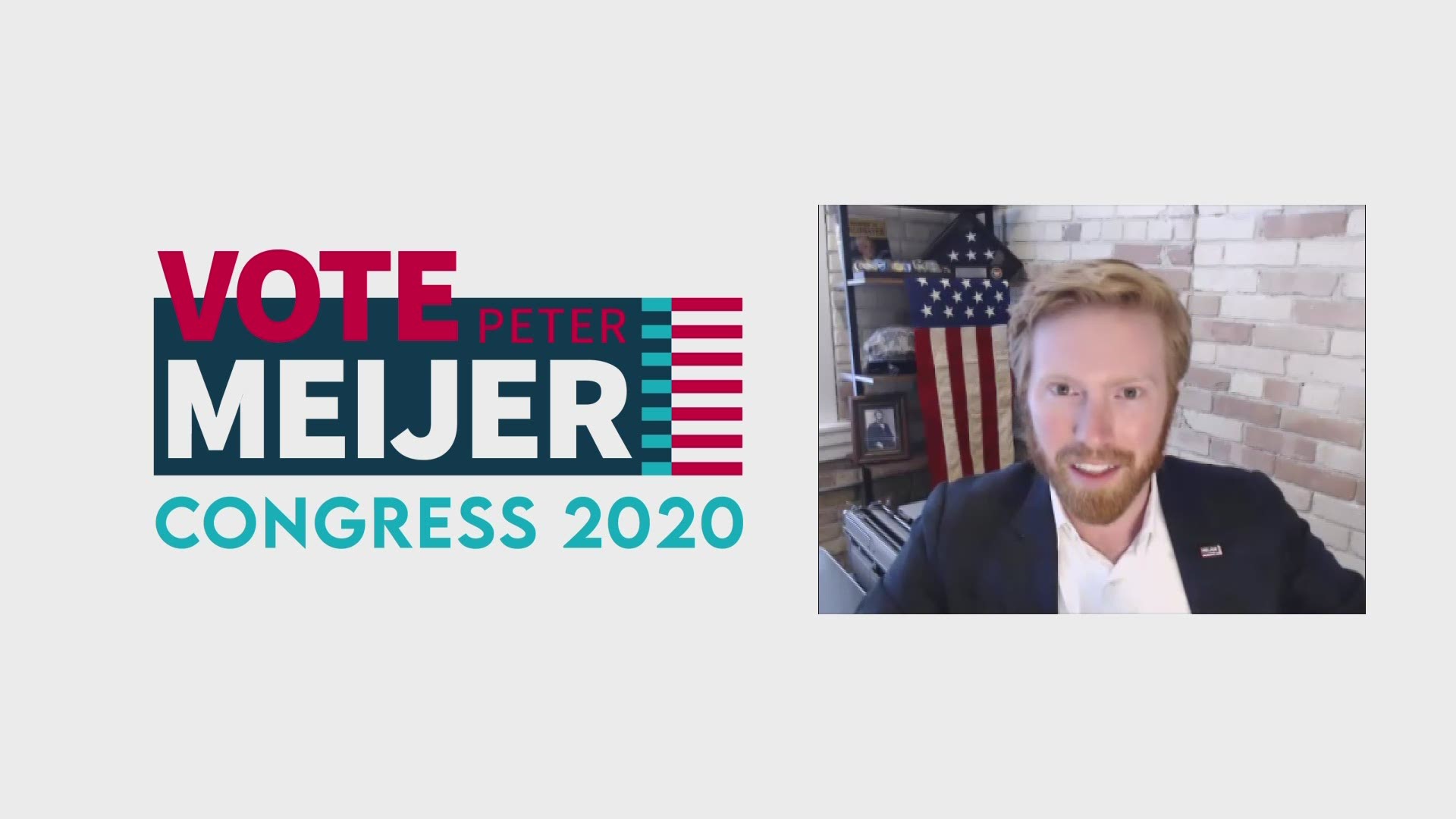 This week, 13 ON YOUR SIDE is doing one-on-one interviews with each of the Republican candidates competing in the Aug. 4 primary. Wednesday's is with Meijer.

Peter Meijer, scion of the Midwest grocery store chain Meijer, is an Iraq War veteran who deployed for a year in 2010 as a non-commissioned officer. He then worked in humanitarian and disaster relief following weather disasters in New York, Oklahoma and the Philippines.

Here are a few of the questions asked:

NICK: What is the most important issue facing the Third District?

MEIJER: It's coronavirus response. It's reopening our economy. It's making sure we're taking care of folks who need assistance in the short term, and strengthening a lot of the weaknesses coronavirus has exposed in the long term.

NICK: When you hear the phrase 'Black Lives Matter,' what do you think of?

MEIJER: I wonder if it's an upper case reference to a political organization, has an agenda that far outstrips race relations; or if it's the very clear, factually accurate statement that our neighbors have to feel safe in their skin, that elements of our policing and society have been unjust.

NICK: Do you believe that police treat Blacks and whites equally?

MEIJER: I think there are disparities, some based on location, some based on socio-economics, or geographic areas that oftentimes overlap with racial inequality.

NICK: You sound like you believe there's some disparity, but based on geography and socio-economics... but not skin color?

MEIJER: I think we're trying to abstract national trends based on incidences that are abhorrent. But, also, within a country of 330 million people it's challenging to take, kind of, anecdotal components and make that into larger trends.

MEIJER: I've said from the beginning, I'm my own individual, I'm my own person. I'm not going to be a rubber stamp. Now, the president and I align closely on a number of issues. Whether that's ending our wars overseas, whether that's criminal justice reform, whether that's making sure our economy is strong and vibrant. There are probably going to be areas where we disagree. And that's just a reality of life. At the end of the day, a representative is running to represent the Third Congressional District in a separate branch of government.

NICK:  You come from a very well-known, very wealthy family. In politics, the idea of being able to relate to people is a real thing. How do you convince people who are currently out of work, struggling to put food on the table, that you understand what they're going through?

MEIJER: By talking with them. By reaching out. The idea that someone can't relate to something that's at all different from their background — if that's true, then why does anyone bother? You bother because you care about your neighbors, you care about everyone in the community, and each community is only as strong as the most vulnerable folks within it.

The other candidates in the race are Lynn Afendoulis, Joe Farrington, Tom Norton and Emily Rafi. The winner of the GOP primary will face Democrat Hillary Scholten in November.