Georgia election law explained: Here's what the law does, doesn't do

One of the most attention-grabbing elements of the law is the provision that it makes it illegal to hand out food or water to people as they vote. 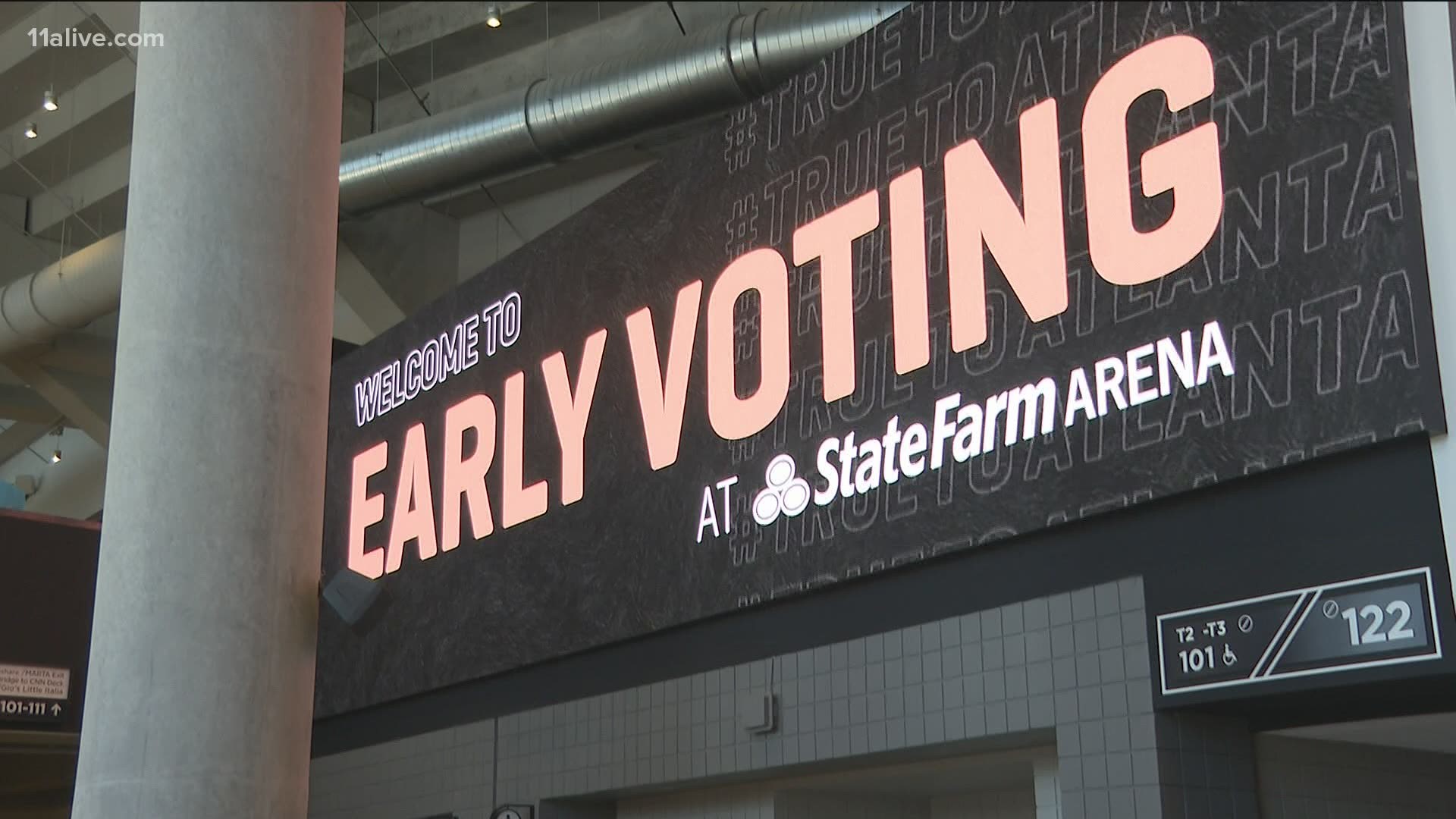 ATLANTA — It's been a little more than a week since Georgia Gov. Brian Kemp signed a controversial election reform bill into law, but the ramifications of the legislation seem to just be coming into focus.

On Thursday, March 25, Kemp signed SB 202 - backed by Republicans and passed in the statehouse on a party-line vote - into law.

It didn't take long, however, for the law - or SB 202, formally known as the Election Integrity Act of 2021 - to come under fire by opponents, some of whom have called for boycotts on the state of Georgia as well as business who are headquartered there.

It also led to the move by the Major League Baseball Commissioner to move the 2021 MLB All-Star Game - slated to take place at Truist Park in July - out of the state of Georgia.

But there's been a lot of rhetoric on both sides of the aisle regarding what the Georgia election law does and does not do. That's why 11Alive is working to dive deeper - past the political talking points - and offer more context.

Background of the law

Republicans introduced election reform proposals during the legislative session that came on the heels of a contentious election cycle that saw significant losses for Republicans in Georgia - a state that has reliably voted red.

It was largely thanks to strategic organizing and mobilization of voters by Democrats ahead of the 2020 presidential election and a Senate Runoff election that saw wins for the Democratic party in the state of Georgia for the first time in decades - electing a Democrat as president for the first time since 1996 and sending two Democrats to the Senate, delivering President Biden a narrow majority.

In the days after the presidential election, when it became clear that former President Donald Trump lost the state to President Biden, Trump went on a pressure campaign (think back to that infamous phone call) and urged state election officials to "find the votes" to declare victory for him in the state.

Trump also repeatedly and falsely claimed that there was widespread voter fraud that took place during the election - even though three different audits and an official recount each reaffirmed Biden as the winner of the state's electors. No widespread fraud was ever found.

Critics of the law claim that it was on that false narrative of widespread voter fraud that Republicans based the legislation.  And the law, according to the wording of the bill, was introduced because "there was a significant lack of confidence in Georgia election systems," even though there was no evidence of anything nefarious happening during the election.

Republicans, however, have countered that state election law was overdue to get an overhaul, irrespective of the 2020 election, and the goal is to make it "easy to vote but hard to cheat."

What are the criticisms of the Georgia election law?

In its early stages of formation, Republicans aimed the bill to tighten limits on absentee voting - a method enacted by Republicans but highly favored by Democrats during the 2020 coronavirus pandemic - going as far as eliminating no-excuse absentee voting.

Versions of the bill also sought to eliminate Sunday voting, which critics saw as a direct attack on Black voters, who routinely organize "souls to the polls" events following Sunday services.

It was these provisions, in particular, that led critics to call the bill "Jim Crow 2.0," because they said the changes targeted Black voters' ability to cast a ballot and it harkened back to the Jim Crow era in which Black voters were systematically kept from voting. Republicans said that framing was unfair.

But, after pushback - and Republican leadership opposing the effort to remove no-excuse absentee voting - GOP crafters of the bill tempered the more extreme provisions. However, no versions of the bill received Democrat support in the statehouse.

Even with some of the earlier, more restrictive provisions gone, critics said what remained in the bill that became law - like requiring a Georgia ID in order to request an absentee ballot and forbidding anyone other than poll workers from distributing food or water to voters in line - still targeted Black voters.

Supporters, however, say that requiring IDs makes it easier on election workers to identify and count ballots valid and keeps people from engaging in what they called electioneering.

What does the Georgia election law actually do?

These are some of the highlights of the law:

Below, we explain in more depth some of those rules, and how they're different from before.

Under the new law, absentee ballots cannot be requested earlier than 78 days or less than 11 days ahead of a general election or the runoff for that election. Previously, any Georgia voter was able to request an absentee ballot up to 180 days prior to Election Day. It is also no longer allowed to send an absentee ballot application to voters unless one is requested.

The new law also de-emphasizes signatures used in the absentee ballot process and instead requires voters to provide a copy of a Georgia ID.

Gov. Kemp has touted a piece of the legislation that requires all of Georgia's 159 counties to have at least one drop box for voters after he said it wasn't previously a requirement.

But, the new law limits exactly where and how those drop boxes - heavily used during the 2020 election - are kept.

The law says all boxes must be located at the office of the board of registrars or absentee ballot clerk or inside locations at which advance voting is taking place, a change from when many boxes were located outside during the 2020 election.

In addition, the drop boxes have to be kept closed when advance voting is not happening, and all boxes are required to be under constant surveillance by an election official, law enforcement official, or licensed security guard.

All ballots inside the box have to be collected at the end of each day by a team of at least two people, according to the law.

According to the bill, there were "significant variations across the state in total number of hours of advance voting depending on the county."

Under the law, voting can only take place between 9 a.m. and 5 p.m. during weekdays, other than state holidays. However, registrars may extend the hours for voting from 7 a.m. to 7 p.m. if they choose.

Also, the law now requires two Saturday voting days between the hours of 9 a.m. and 5 p.m., with option to add two Sunday voting days as determined by election registrars (though it can't go longer than 7 a.m. to 7 p.m.).

The new law shortens the time for runoffs from nine weeks to four.

Military and overseas voters can also use ranked-choice absentee ballots to rank candidates before a primary or general election, allowing their preferences to be determined in any possible runoff.

The shorter period means less time for early and mail voting. Early voting had lasted three weeks before runoffs. Now early voting would begin “as soon as possible” but no later than the second Monday before the election, possibly leaving as little as five weekdays and no weekend days of early voting. Voters would also have less time to apply for a mail ballot.

No new voters could be registered in the period before a runoff because the registration deadline would be the day before the earlier election, reports the Associated Press.

Under the new election law, there are significant changes to the way the state's election board is structured.

The Secretary of State will no longer serve as a member of the board and is no longer the chairperson, according to the new law. Instead, the secretary will be replaced by a chairperson elected by the General Assembly. Other members of the board include:

The General Assembly, which is currently majority Republican, would get to appoint three members of the board, meaning that it could sway the balance of power of the board and give the party in power more influence.

Aside from changing the makeup of the election board, the law also gives that same board the power to "suspend county or municipal superintendents and appoint an individual to serve as the temporary superintendent in a jurisdiction."

Some critics see this provision as a possible reaction to the situation in Fulton County - a Democratic stronghold - in which hours-long lines plagued polls during primaries; the Fulton County Election Board director also came under fire after the election for the handling of the primaries. However, other county elections officials drew heat after ballots - that initially weren't counted - were found during recounts.

The provision also led to some fears of state officials being able to "overturn" the results of an election. But that's not true, as our VERIFY team found.

One of the most attention-grabbing elements of the law is the provision that makes it illegal to hand out food or water to people as they vote.

Closing that loophole followed through on a threat from Secretary of State Brad Raffensperger at the end of last election season to crack down on the practice of "line warming."

Technically, there is already a federal statute that prevents the exchange of goods or services or money for votes, but organizers typically sidestepped committing any wrongdoing by offering food or drinks to everyone present regardless of whether or not they are there to vote.

Critics see the change under the new law as a target on a tactic often employed by organizers to entice people to wait in long voting lines, especially in more urban and Black neighborhoods.

Supporters of the law, however, argue that the practice could be used to "inappropriately influence voters in the crucial final moments before they cast their ballots" and that voting line giveaways "violate the protections Georgia law has placed on campaigning near a polling location or voting line."

The law makes violations of the provision a misdemeanor.

The law - which comes amid a national effort by Republicans to reform election laws post-2020 election - has once again brought Georgia politics into the national spotlight, as celebrities and activists called for a boycott of the state and businesses based here.

However, Democrat Stacey Abrams, one of the key figures behind the Democrat's success in the election cycle, urged against that, saying it would ultimately hurt small businesses more. Instead, she called for more voter participation in upcoming elections.

Also voicing opposition to the law is the media mogul and Atlanta resident, Tyler Perry, who called for a federal investigation into the constitutionality of the law, and President Biden, who called the law a "blatant attack on the Constitution" and "Jim Crow in the 21st Century."

And, after initial tentative statements on the law, Atlanta-based Delta Air Lines, Coca-Cola and others delivered sharp rebukes of the law. Gov. Kemp later called Delta's statement into question, saying the company never spoke up throughout the process of forming the bill.

Republicans, like Gov. Brian Kemp, have since doubled down on their support of the law. Senate Minority Leader Mitch McConnell also warned CEOs who criticized the law, and others like it, to "stay out of politics."

The law is slated to take effect July 1, but several lawsuits have been filed against it, with the litigation of them possibly delaying that timeline.

Material from the Associated Press appears in this report.