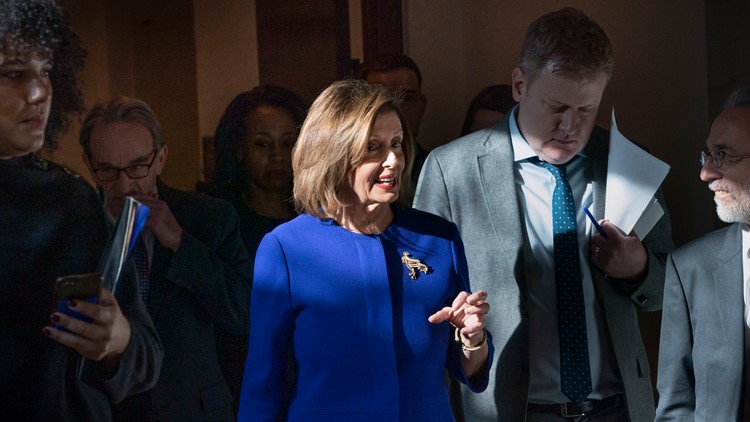 Photo by: AP
Speaker of the House Nancy Pelosi, D-Calif., walks to meet with reporters following escalation of tensions this week between the U.S. and Iran, Thursday, Jan. 9, 2020, on Capitol Hill in Washington. The House plans to vote on a measure limiting President Donald Trump's ability to take military action against Iran as Democratic criticism of the U.S. killing of a top Iranian general intensified. (AP Photo/J. Scott Applewhite)

WASHINGTON — Michigan lawmakers responded Thursday to the war powers resolution brought against President Trump by the House. The measure says Trump must seek approval from Congress before engaging in further military action against Iran amid recent attacks from both countries.

Read more: Iran fires back at US with missile attack at bases in Iraq

The war powers resolution is not binding on the president and would not require his signature.

“While a potential escalation with Iran should be taken very seriously, the non-binding show vote put forward by Speaker Pelosi and Congresswoman Elissa Slotkin has no enforcement and looks more like a political statement than any sort of legislative response,” said Congressman Bill Huizenga in a press release.

“Based on the information I received from General Milley, the Chairman of the Joint Chiefs Staff, the President moved on actionable intelligence to protect America, our diplomats, and our troops by eliminating the chief architect of terrorism across the Middle East.”

“As members of Congress, we must do everything we can to protect American citizens at all costs," said Rep. Fred Upton (R-Saint Joseph) in a press release.

“Last week, I supported the President’s decision to kill one of the world’s deadliest terrorists. I left yesterday’s classified briefing convinced that the evidence was compelling, leaving no doubt that we stopped an imminent strike against U.S. interests. I understand specific details have to be withheld to protect intelligence assets.

“I agree we need to have a substantive discussion on War Powers and the balance between the President’s authority to address imminent threats and Congress’ constitutional responsibility to declare war, but we should not play politics with our nation’s security. Our service members deserve better and the American people deserve better.

“I don’t ever want to look back wondering what we should have done to prevent ‘the horse from getting out of the barn.’ Moving forward, the safety of American troops and the American people will remain our ultimate goals.”

As of 7:30 p.m. Thursday, the four remaining West Michigan representatives did not release a statement.