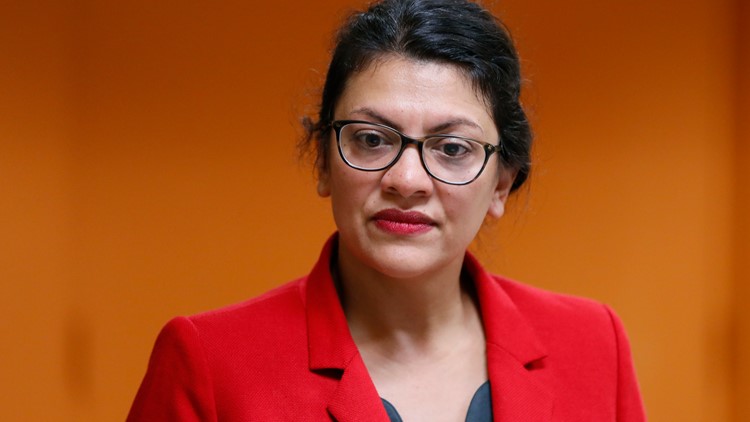 On Friday, Trump published a Twitter rant criticizing Tlaib for her decision not to visit Israel. The president questioned Tlaib's motives in three tweets published Friday evening. He said the congresswoman "grandstanded" and questioned if the whole thing was a "setup."

Tlaib and another Democrat Rep. Ilhan Omar were originally barred from visiting Jerusalem and the West Bank because of their support for the international boycott movement. They were barred after Trump urged Israel to deny them entry, saying "they hate Israel & all Jewish people."

The incendiary words were followed by Israel's decision to stop Tlaib and Omar from entering Israel. Both congresswomen are critics of Isreal's treatment of Palestinians and they planned to visit Jerusalem and the West Bank on a tour organized by a Palestinian organization.

Tlaib's family immigrated to the United States from the West Bank, where she still has close relatives.

Prime Minister Benjamin Netanyahu said Israel is "open to critics and criticism," except for those who advocate boycotts against it.

Early Friday Israeli Interior Minister Aryeh Deri announced that Tlaib had requested and been granted permission to enter the West Bank to see relatives. However, later that morning, the congresswoman said she would not continue with the trip and cited the "oppressive" Israeli restrictions.

Shortly after the announcement, Tlaib tweeted that she wouldn't allow Israel to use her love for her grandmother to force her to "bow down to their oppressive & racist policies."

"When I won (in 2018), it gave the Palestinian people hope that someone will finally speak the truth about the inhumane conditions. I can't allow the State of Israel to take away that light by humiliating me," she wrote.

Bassam Tlaib, an uncle who lives in the West Bank, expressed support for her decision.

"If Rashida's visit to her homeland is under conditions, we reject that," he said. "It's Rashida's right as a Palestinian to come and visit her family and country."

This isn't the first time Trump has picked a fight with Tlaib. She and Omar are part of the "squad" of liberal newcomers — all women of color — whom Trump has labeled as the face of the Democratic Party as he runs for re-election. He subjected them to a series of racist tweets last month in which he called on them to "go back" to their "broken" countries. They are U.S. citizens.

In the president's tweets on Friday, he said that Tlaib and Omar are "becoming the face of the Democrat Party." He claimed that Rep. Alexandria Ocasio-Cortez, another congresswoman in the "squad" is "fuming." Cortez

Ocasio-Cortez responded by quote-tweeting the president with a laughing emoji. Tlaib has not responded to Trump's latest tweets, however she told the Detroit Free Press she does not respond to his tweets.

"I can’t waste my time responding to tweets," she told the paper.