Of the 22,000 who attended VA Lobby Day, many armed with assault rifles and handguns, one arrest was made

Thousands of demonstrators, some armed, have swarmed the streets outside of capitol grounds. 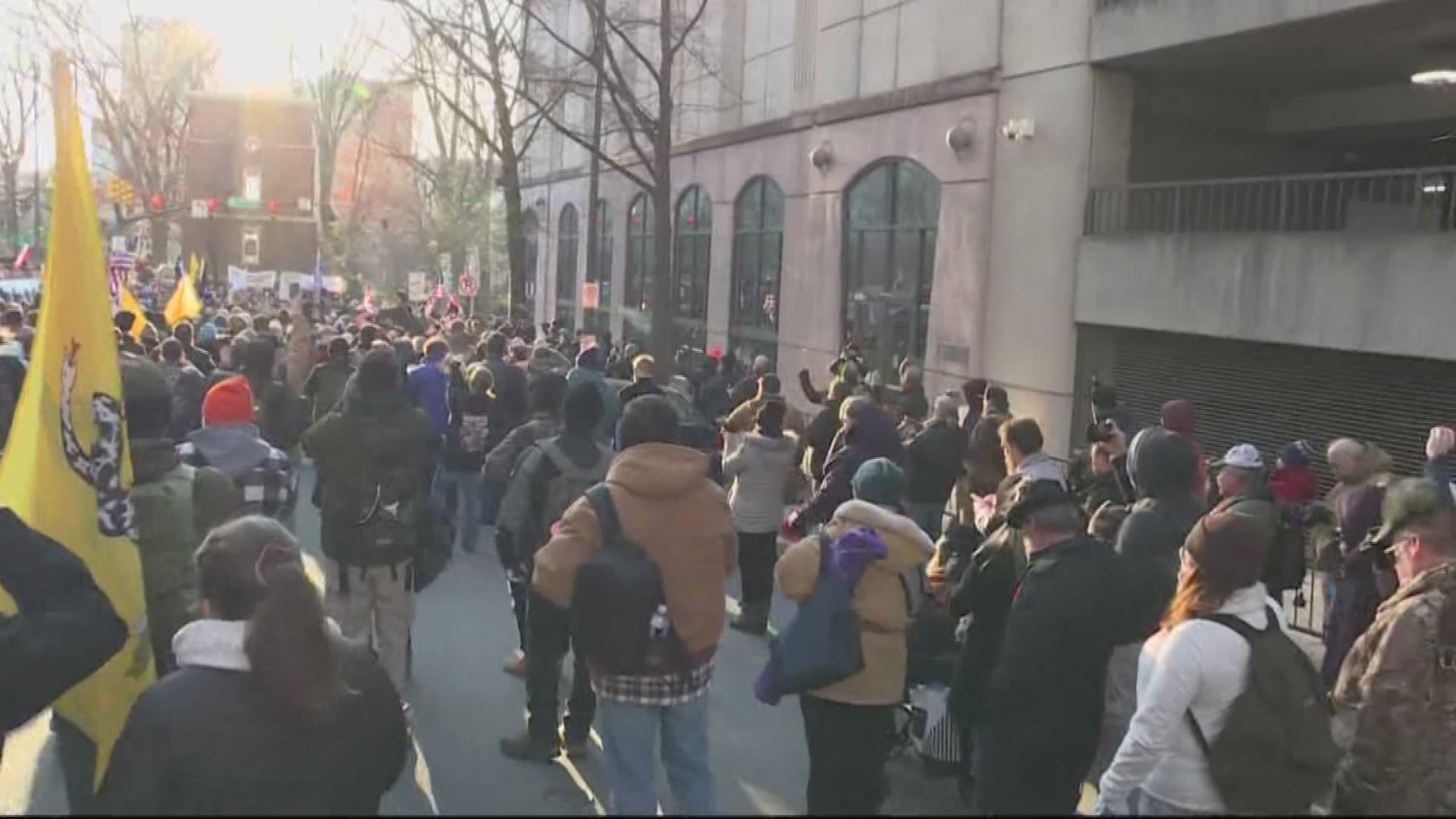 According to Twitter account VACapitol2020, 22,000 people attended Lobby Day, with approximately 6,000 people on Capitol Square and 16,000 outside the fences.

Despite concerns that white extremist militia groups planned to enact violence during the rally, leading Gov. Ralph Northam to issue a State of Emergency banning all weapons from the capitol grounds, the event itself went off without a hitch. Only one arrest occurred, with a 21-year-old woman charged with one felony count of wearing a mask in public.

"Today showed that when people disagree, they can do so peacefully," Gov. Northam said in a press release. "The issues before us evoke strong emotions, and progress is often difficult."

Jan. 20 is traditionally known as "Lobby Day" in Richmond, but with Northam and a Democratic majority set to roll out tighter gun-safety legislation, those in favor of gun rights turned out around the Virginia Capitol to press their case against it.

Back on Jan. 16, the Virginia Senate passed three bills regarding guns:

Senate Bill 35 would give the power to local jurisdictions to prohibit guns in any form from a public space during an event.

Senate Bill 70 would require a background check for any firearm transfer. Without one, the seller could be found guilty of a felony. There are exemptions to this bill, including but not limited to if you transfer a gun between family members or a land trust, if it’s an antique, or if it’s at a shooting range and you let somebody use it.

Senate Bill 69 would limit handgun purchases. Prohibiting anyone who’s not a legal firearm dealer from buying more than one gun within a 30-day period. Again, there are exemptions including if you’re in law enforcement or security if you’ve had someone steal your gun, if you’ve purchased the gun from a private sale, or if it is an antique.

The three bills will now go to the House of Delegates for consideration.

Prior to the Lobby Day rally, Northam issued a State of Emergency, banning all weapons from the capitol grounds after receiving word of credible threats of violence. The weapons ban lasts until 5 p.m. Tuesday but doesn't affect streets outside of the capitol grounds.

Tight security was in place in and around the Capitol in preparation for the thousands of advocates anticipated to rally.

People of all backgrounds attended the rally. Some held signs representing the LGBT community.

Many at the rally spoke about Northam's proposed bills regarding gun legislation.

Sheriff Richard Vaughan of Grayson County, Virginia, said if the bills go through as proposed, they won't be enforced.

"They are unconstitutional," he said.

Another rally participant told WUSA9 reporter Bruce Leshan that a petition was being passed around to remove Northam from office.

Alex Jones, a radio show host with Info Wars and a conspiracy theorist, made an appearance at the rally. He was among the thousands rallying in protection of their Second Amendment rights.

The organizer of the rally, Philip Van Cleave, said 130,000 armed attendees were expected at the rally, but final counts showed 22,000 attended.

"I've had a couple of girlfriends murdered," Vanessa Dallas, a demonstrator from Virginia Beach, said. "I believe in the first amendment. I have a right to protect myself...You don't have to own a gun, that's a personal choice. But in this country, if you're a citizen, if you're born here, you're allowed to protect yourself."

Protesters lined up in the streets before heading to the rally on the Richmond Capitol steps.

"If it starts in Virginia, and they get by with this wack, these wackadoodle laws, it's just going to go across the country," Dallas said. "They're trying to strip us of our rights. This is a God-given right. It's natural and it's supposed to be un-infringed. So, we have some people that are trying to shove stuff down our throats that I consider to be unconstitutional and I'm hoping and praying that the Supreme Court is going to come out and get these people straight."

A group of heavily armed gun rights advocates said they were "just trying to attract attention."

A man was seen carrying a .50 sniper rifle at the rally. He was just one example of those carrying military-style weapons throughout the rally.

Van Cleave, the organizer of the rally, tweeted there was a "huge turnout," before 9 a.m.

Demonstrators headed to the Capitol before 8 a.m., while the rally wasn't set to start until 11 a.m.

The league has advocated for what is called "Second Amendment sanctuary" resolutions in over 130 counties and municipalities around the Commonwealth. Though such measures carry no legal weight, the VCDL said they represent a defiant gesture against tighter legislation.

1 / 26
AP
A demonstrator stands on the sidewalk before a pro gun rally, Monday, Jan. 20, 2020, in Richmond, Va. There was a light crowd early morning Monday outside the Capitol ahead of the rally. (AP Photo/Julio Cortez)

RELATED: How did the topic of gun rights escalate in Virginia?