Harris will be the highest-profile representative from the Biden campaign to visit Texas in person during the general election. 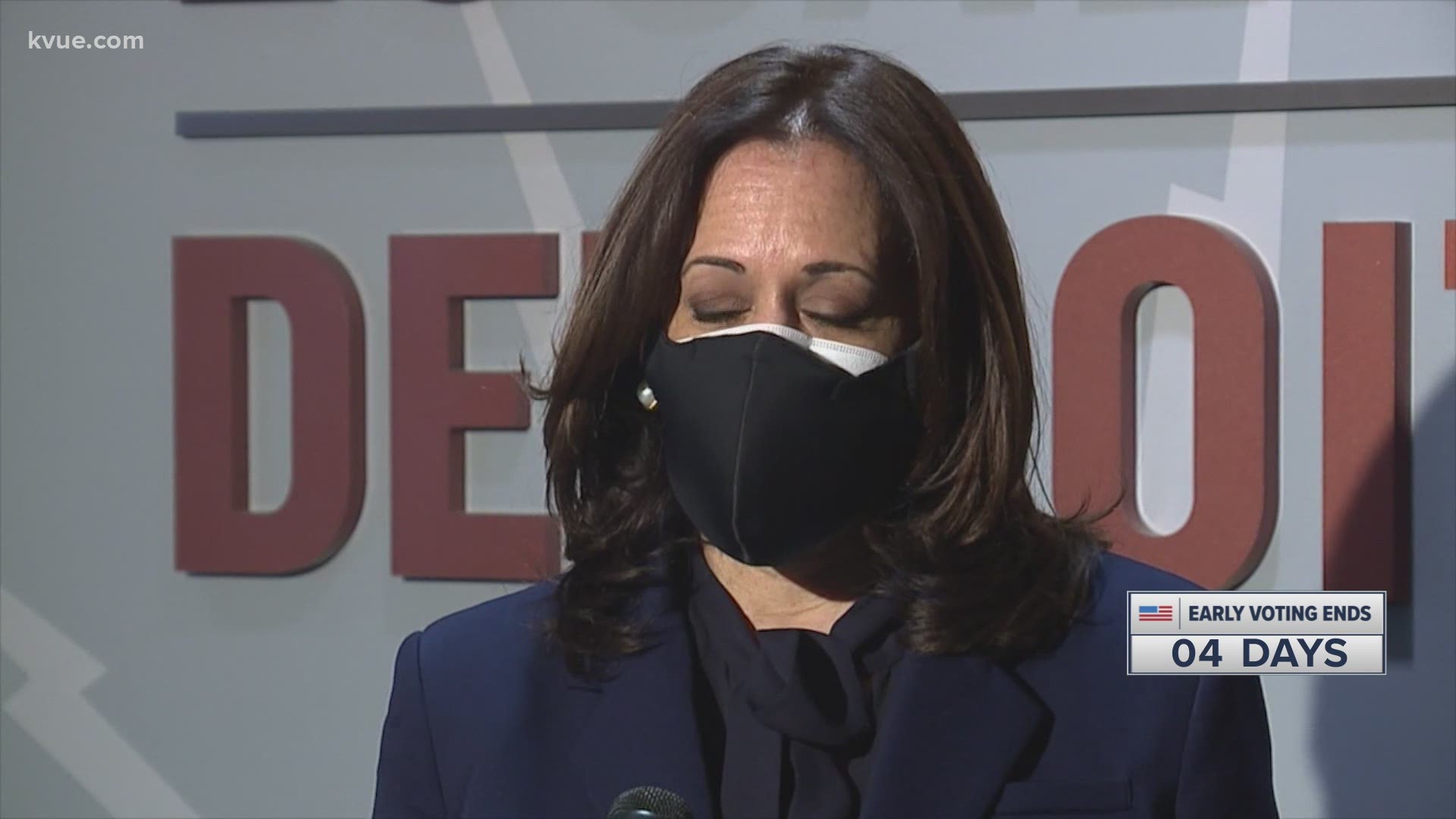 TEXAS TRIBUNE – Kamala Harris, Joe Biden’s running mate and the California U.S. senator, will be visiting Texas on Friday, according to an email Biden’s campaign sent to Democratic lawmakers in Texas on Sunday.

Harris will be the highest-profile representative of the Biden campaign to visit Texas in person during the general election, though his campaign was already set to spend millions of dollars on TV ads in Texas.

“Allow me to provide as a courtesy, the below in person travel notification for Sen. Kamala Harris which will be publicly released momentarily,” the email reads. “Sen. Kamala Harris will be personally traveling to Texas on Friday - October 30. 2020.”

Her visit comes as polls project a tight presidential race in Texas. According to the latest University of Texas/Texas Tribune poll, Trump leads Biden in the state by 5 percentage points. Trump won Texas by 9 points in 2016.

In the lead-up to Election Day, Texas Democrats have called for both Biden and Harris to invest heavily in Texas. In an October op-ed in The Washington Post, former U.S. Rep. Beto O’Rourke, who endorsed Biden after dropping his own presidential bid, and Tory Gavito, the president and co-founder of the progressive donor network Way to Win, urged the Biden campaign to steer serious money to the state.

“Biden, his campaign and Democrats in general need to make it clear: We are competing in Texas, and we’ll invest whatever it takes to turn out the state’s true electoral majority and flip Texas once and for all,” they wrote. “Democrats have historically failed to invest in Texas, despite the size of this prize, because they believed the door is closed to Democratic presidential candidates. But, like many things in 2020, this year is different — Biden has his foot in the door and needs to kick it open for a quick end to the election.”

Biden expanded his on-the-ground presence in Texas in September, hiring 13 more staff members — after an initial hiring announcement in early August — to his team.

Biden’s wife, Jill Biden, visited Texas earlier this month to mark the state’s first day of early voting. She rallied voters in El Paso, Dallas and Houston, telling them a historic opportunity was within reach.

“For the first time in a long time, winning Texas is possible,” Jill Biden said in El Paso. “Not just for Joe, but for the Senate and the state House as well. And if we win here, we are unstoppable.”

Prior to that, Harris’ husband, Douglas Emhoff, spent two days in the state, swinging through the Rio Grande Valley, San Antonio and Dallas.

Meanwhile, Trump’s campaign has long dismissed the notion that the state is in play.

Though Texas GOP Chair Allen West expressed hope that the president would visit North Texas before Election Day, campaign spokesman Tim Murtaugh and former Secretary of Energy Rick Perry told supporters on a press call Sunday that Trump would not visit the state in the lead-up to Nov. 3.

This story originally appeared in The Texas Tribune.

15-year-old Central Texan hopes to get adopted before adulthood

Atari Hotel in Austin one step closer to reality