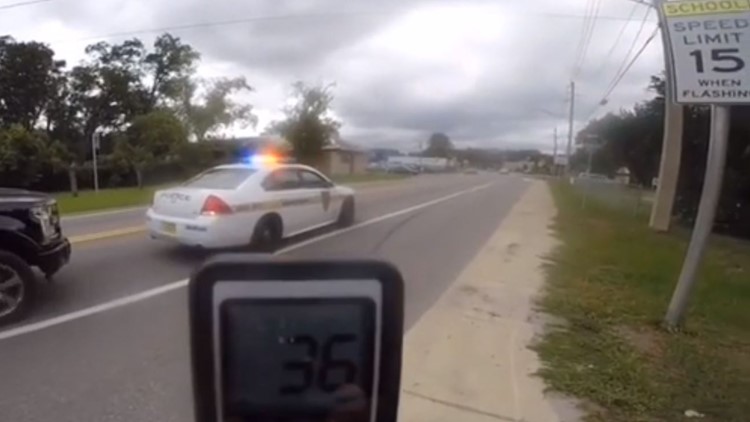 A video on Reddit, showing what appears to be a Jacksonville Sheriff's Office patrol car speeding through a school zone, has gained some traction online.

In the video, a person can be seen holding up a radar gun and pointing it at cars driving past Thomas Jefferson Elementary School on Nevada Street clocking their speed.

Around the 18 second mark, the video shows what appears to be a Jacksonville Sheriff's Office patrol car driving 36 mph in a school zone where the posted speed was 15 mph.

The patrol vehicle then stops and then drives in reverse in the middle of traffic to address the man on the sidewalk who was filming.

The conversation on the video was as follows:

Police: "I do believe I was hitting my brakes as I was coming up to it."

Man filming: "The line is right there for the school zone."

Man filming:  "Alright, I don't want to cause an accident."

Police: "You need to get off the road before you cause one."

Man filming: "I'm on the sidewalk, dude. You're busted man."

First Coast News is awaiting comment from JSO on the video. JSO spokesman Christian Hancock said the video has been sent to the sheriff along with the station's request for comment.

The original video was posted on YouTube Sept. 5 by a user/page named 'HonorYourOath Civil Rights Investigations.' The user has several other videos on the page of public servants speeding in the school zone including school buses and fire personal.