Reminder: The 'Secret Sisters Gift Exchange' is a scam

It may sound fun and harmless, but it's a scam and it's against the law. 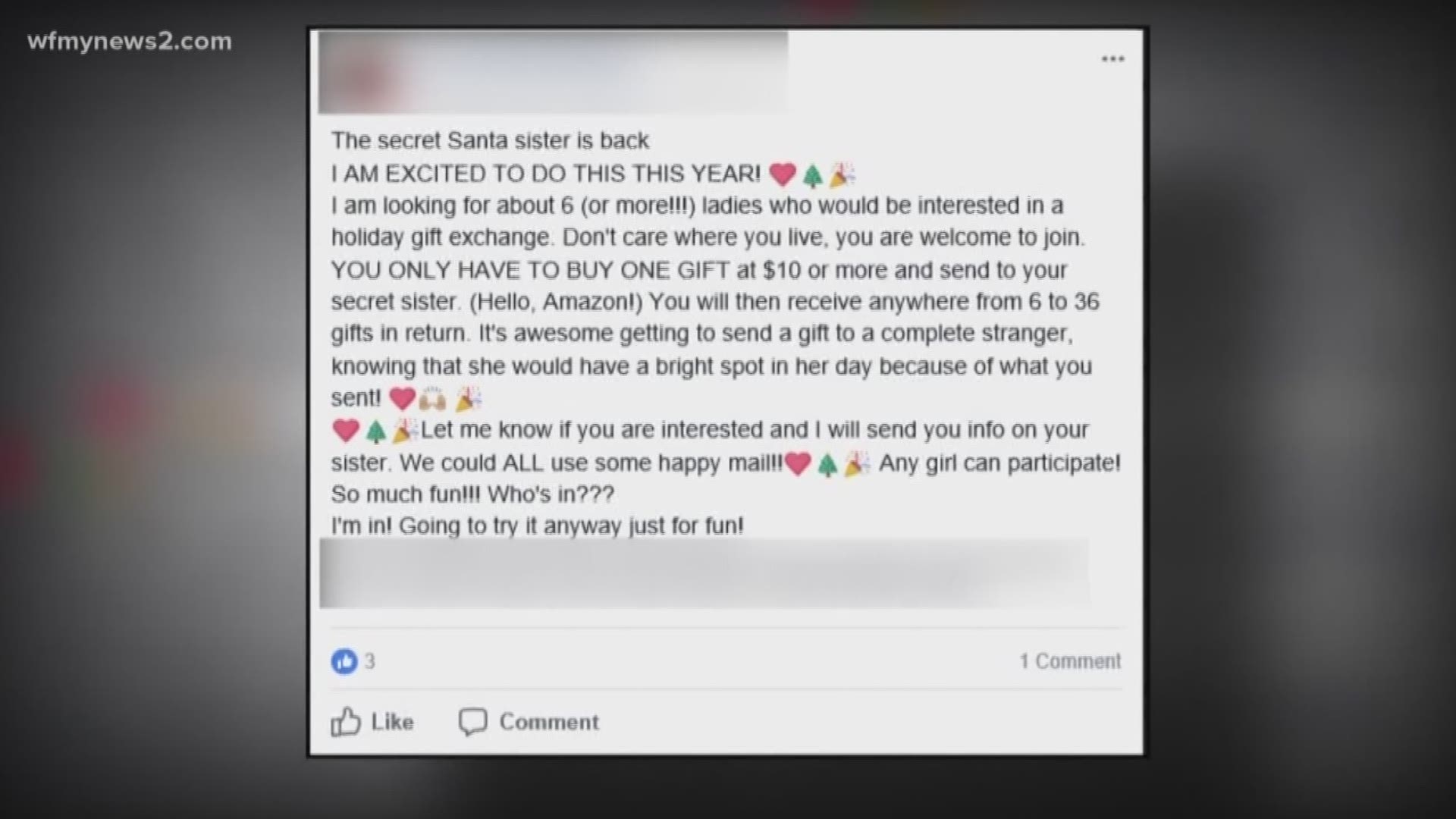 INDIANAPOLIS — Remember those chain letters of the past?

They arrived in your mailbox along with a promise of riches and a creepy warning of dire consequences if you didn't immediately mail it on to 10 acquaintances.

A new example of holiday fraud is making the rounds: the "Secret Sister" gift exchange. Like the old-fashioned chain letter, it's still illegal — and it promises what it almost never delivers — but it's arriving nowadays via social media, mostly Facebook.

RELATED | Here's Why You Shouldn't Do The Secret Sister Gift Exchange

The scam is targeted to women and goes mainly like this:

Sometimes, the wording is changed to encourage people to exchange other gifts, including bottles of wine.

Wow ... this sounds harmless doesn't it?

Here are seven reasons why you should never participate.

1. It's a pyramid scheme. Basically, the first people to join the gift exchange may receive gifts back, but as later people respond, they get fewer gifts or no gifts at all. Only the person who started the pyramid scheme really benefits.

2. It's illegal. They're classified as chain letter, which are considered a form of gambling and are illegal if they request money or other items and promise a substantial return. "They don't work because the promise that all participants in a chain letter will be winners is mathematically impossible," the Postal Service said.

3. It's nothing new. The first Secret Sister gift exchanges started circulating on Facebook around October 2015, according to Snopes.com. Don't fall for it this time around.

4. You feel stupid. Nobody wants to waste time or energy waiting for something that never arrives. Or knowing that they fell victim to a scam.

5. Your friends will hate you. Honestly, who wants to be inundated with these requests — or worse, fall victim to one because a friend who you're supposed to trust sent it to you.

6. You feel helpless. You won't be able to warn others about the scam. Most of these gift exchanges warn naysayers and skeptics that their posts will be deleted from common threads, Snopes warns.

7. ID theft. You could be the victim of identity theft if you participate in a Secret Sister gift exchange. As part of the scam, you're asked to provide an address, a phone number and other personal information that could be used by criminals in the future.

The old warning also applies in this case: "If it sounds too good to be true, that's probably because it is."

So, the next time someone sends you a Secret Sister gift exchange request, just ignore it

(This article originally appeared in The Indianapolis Star in December 2017.)