Rhys VanDemark is one of 39 child life specialists on the Helen DeVos Children's Hospital staff. 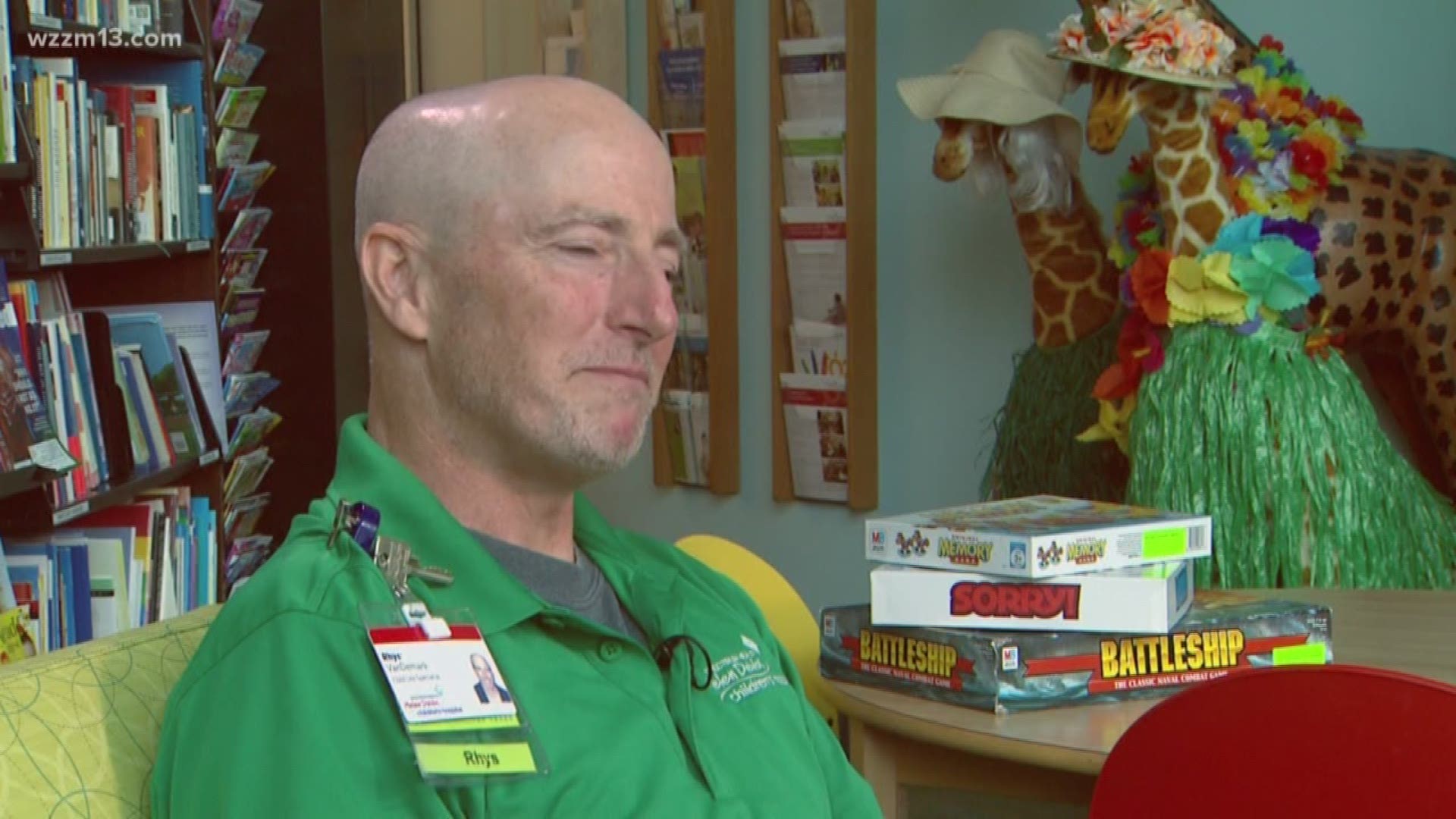 GRAND RAPIDS, Mich. - It's "Redemption Wednesday." That's what Rhys VanDemark is calling it. Next week, Wednesday may have a different name.

Why does he do this?

It's a part of what he uses to help the patients inside Helen DeVos Children's Hospital divert their attention away from brutal treatments and uncertain outcomes that come with battling cancer, as well as other childhood ailments and diseases.

"When you find out what gets them excited, that's your in," said VanDemark, who is in his twentieth year as a Child Life Specialist at Helen DeVos Children's Hospital. "Each patient is unique."

VanDemark is one of 39 child life specialists on the hospital's staff.

"Child Life is a really powerful and unique thing that a lot of people don't know about," said Russ Hoekstra, who is the hospital's Child Life Specialist Manager. "It's an opportunity for us to really encircle a lot of patients that come here, and try to get them to see this place as normal.

"It's not easy to come to a hospital like this, so to be able to give the kids and their parents the tools to get through this road bump of their life, all the procedures and preparation, is important."

Over the years, VanDemark has found several creative ways to connect with the sick children, and diffuse most of their fears and anxieties about their respective hospital stays.

"He's a legend is what he is," added Hoekstra. "The antics he pulls are all in the name of fun, and are specifically tailored to what each child needs to help them open up and cope."

VanDemark is considered by many to be the "King of Distraction."

"I like that term," said Hoekstra. "I think it fits him really well."

His first stop on his Redemption Wednesday planner was to visit with a 4-year-old girl who had just entered into hospice care.

But that plan changed quickly.

Rhys' phone rang and on the other end was a boy named Jens, who is battling Neuroblastoma, which is a type of cancer that forms most often in infants and young children.

"I'm going to play a joke on you," Jens told Rhys.

Rhys hung up with Jens and said, "See how things can change? We have to go see Jens before we do anything else."

That's how Rhys' rounds for the day began. He left the first floor and took the elevator up to the 9th floor to find Jens who happened to be in the play room.

When Rhys entered the play room, Jens immediately greeted him by emptying an entire can of silly-string on him.

"I think there's a misconception that a lot of people may have about the children's hospital," said VanDemark. "[Most people think] we're around sick kids that feel terrible all the time and that this is a really glum place.

"Even though we deal with life-threatening illnesses and devastating injuries, this is actually a pretty happy place."

Once he untangled himself from all the silly-string, Rhys ran into Sabrina in the hallway. Sabrina was diagnosed with Lymphoma in March 2017, and was spending the weekend at the hospital getting treatment.

"Do you want me to amaze you with a magic trick," Rhys asked Sabrina.

Rhys proceeded to perform several card tricks for Sabrina, distracting her from thinking about her cancer and pending treatments.

"I'm distracting them, but hopefully teaching them how to do that on their own, too," said VanDemark. "I tell [all the kids] how I do the magic tricks. That's a little way of sharing something that they have [with the doctors and nurses] and it makes them feel a little more in control."

After his brief magic show, Rhys looked at his agenda and said, "Let's go fishing."

He promptly started searching the floor for a little boy named Kohen, who is battling Acute Myeloid Leukemia. Once he found Kohen, they went into closet and grabbed a Spider-Man fishing pole.

"We're going to make [Kohen] a list of fish species he has to catch," said VanDemark. "In this case, the species may be a nurse, a doctor and a physical therapist."

A few minutes would pass.

Suddenly, the door opened and the doctor saw the dollar and tried to grab it. Kohen slowly began to reel the dollar closer to him.

"It's fun to see a child's eyes when you tell them that they can play a joke on their nurse or doctor," said VanDemark. "That kind of activity humanizes the interaction between the two people and puts a little more power back in the child's court."

Rhys and Kohen spent close to 30 minutes performing the dollar-fishing-shenanigan, not only tricking a few more doctors and nurses, but also random visitors who were exiting the elevators.

Part of Rhys VandeMark's attempt at connecting with the patients is his distribution of "Bravery Beads", which help document the health journey. Patients like to collect the beads, which lessen the fear of certain treatments patients may face.

"They're called Bravery Beads," said VanDemark. "They're a reward for when patients reach certain milestones along their journey."

The children get a bravery bead for coming to the emergency room, having an x-ray, having a surgical procedure and learning they have a new diagnosis.

"The kids like to collect the beads and string them in the order they received them so they can accurately document their time here," said VanDemark. "They want specific beads, so they won't miss a blood draw, a clinic visit ot a chemo treatment."

Call them Rhys' pieces of progress.

Rhys VanDemark knows his calling in life is to be a child life specialist. Cancer's script gets flipped when the "King of Distraction" is in action.

"These kids are our teachers," said VanDemark. "If we listen to them, they'll tell us what they need."

Part of Rhys VandeMark's attempt at connecting with the patients is his distribution of "Bravery Beads", which help document the health journey. Patients like to collect the beads, which lessen the fear of certain treatments patients may face.

If you know of a story that should be featured on "Our Michigan Life", send an email to 13 On Your Side's Brent Ashcroft at life@wzzm13.com.