Wolverine Worldwide loses bid to have scores of lawsuits sidelined

A judge on Friday refused to sideline scores of lawsuits filed against Wolverine Worldwide for groundwater contamination linked to its tannery waste in northern Kent County. 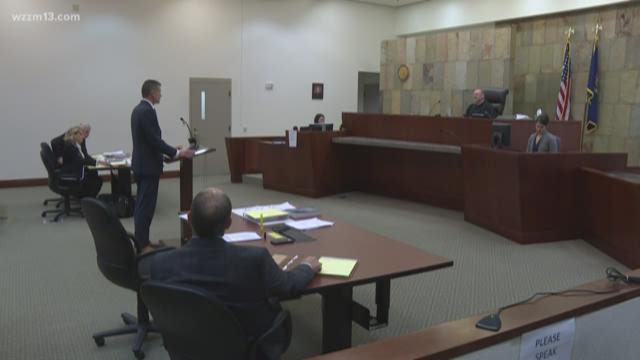 A judge on Friday refused to sideline scores of lawsuits filed against Wolverine Worldwide for groundwater contamination linked to its tannery waste in northern Kent County.

More than 100 circuit court lawsuits have been filed since late November. A federal class action lawsuit was filed in December.

Wolverine lawyer James Moskal asked that the cases be put on hold because the complaints mirror what is contained in the federal class action suit. A status conference in that case has been set for April 11.

“The motion today is designed to answer the question of whether it is necessary and proper to rush these cases forward when another court down the street is handling the same claims, or, in contrast, whether it’s better to take a step back, proceed in an orderly fashion so that we can see what the federal court is going to do,’’ Moskal said.

Attorney Aaron Phelps, whose law firm is representing more than 100 clients in the Kent County cases, said he was pleased with Quist’s decision to let the cases continue.

“It’s significant because we believe people should be able to move forward with individual claims and have their own property values addressed,’’ he said outside of court. “Now they’re going to move forward and we’re happy with that.”

The judge also gave Wolverine until mid-April to provide records and other information to attorneys who filed the lawsuits.

“We’ve literally received nothing,’’ Phelps said. “There are obviously many documents that are relevant to this, so we’re eager to see what’s in the record.’’

Attorney Janet Ramsey, who is also representing Wolverine, said the company is not refusing to produce relevant information.

“We are prepared to do full discovery in this case going forward,’’ she said. “But as Abe Lincoln said, if I have six hours to chop a tree, I’m going to use four hours sharpening my ax. We are sharpening our ax by going through the plan with plaintiffs to get a plan in place for discovery.’’

The judge approved a motion by Wolverine to delay additional depositions until after an April 20th scheduling conference.

Attorneys for Wolverine declined comment outside the courtroom. The company released a statement saying, in part, that Wolverine intends to work “collaboratively to bring long-term water solutions for the community.’’

“While we are disappointed in today’s decision not to stay these cases pending the federal actions, we are pleased the Court recognized the need to proceed forward in discovery in an efficient manner for all parties,’’ the statement reads.

“Our position has always been that we intend to remain a good corporate citizen, help those affected and work collaboratively to provide long-term water solutions for the community. We do not believe the way to achieve those goals was through overlapping and uncoordinated lawsuits in state and federal court.’’

The lawsuits filed by Varnum LLP contend the toxic ground water linked to Wolverine has hurt property values and jeopardized the health of area residents.

The groundwater contamination came to light last May when water tested at a U.S. Armory site near Wolverine’s dump on House Street NE revealed an “alarming’’ amount of PFAS. The chemical was used in Scotchgard, a product used by Wolverine to waterproof shoes and boots.

Wolverine began using Scotchgard in 1958 to treat shoe leather and dumped tannery waste on and around the House Street site and at licensed and unlicensed dumps. Sites include Michigan Department of Transportation property across from the House Street dump.