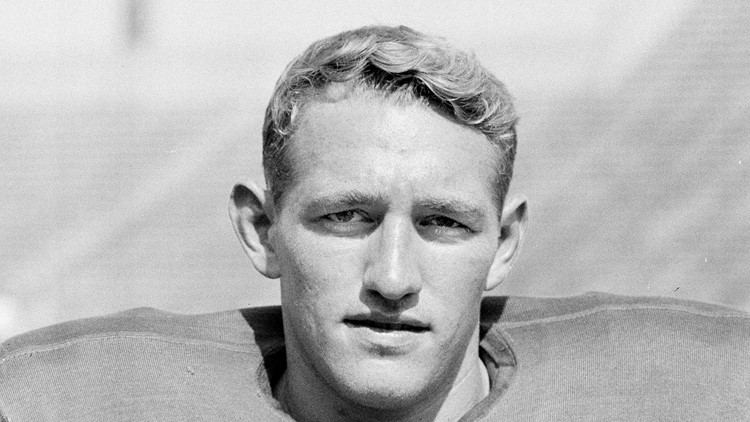 Photo by: AP
FILE - This is a Sept. 8, 1953, file photo showing Michigan State NCAA college football player Henry Bullough. Henry Bullough, whose play and coaching on the football field at Michigan State put him in its athletics hall of fame, has died. He was 85. Chuck Bullough, one of his sons, is an assistant coach for the Spartans under Mark Dantonio and the school announced his death Monday, Nov. 25, 2019. (AP Photo/Phil Sandlin, File)

EAST LANSING, Mich. — Henry Bullough, a former NFL coach and a guard on Michigan State’s national title team in 1952, has died. He was 85.

His death was announced Monday by the school. Son Chuck Bullough is an assistant coach for the Spartans.

Henry Bullough also played on the Michigan State team that won the Big Ten championship the year after it captured the national title.

“Michigan State has lost a great Spartan and the game of football has lost a coaching legend,” coach Mark Dantonio said.

Bullough was an NFL head coach for parts of three seasons with a 4-18 record and helped bring in the 3-4 defense while he was New England’s defensive coordinator in 1974. He led the Patriots briefly in the 1978 season and Buffalo for 21 games during the 1985 and 1986 seasons.

He was an NFL assistant for more than two decades and was with the Baltimore Colts when they won the Super Bowl in 1971. He also was an assistant with New England, Cincinnati, Buffalo, Green Bay and Detroit.

Bullough was Michigan State’s defensive coordinator during its glory years in the mid-1960s. He came back to join George Perles’ staff in 1994 for a 12th season as an assistant.

"Thanks to Michigan State, I accomplished everything I could have hoped for in my profession,” Bullough said when inducted into the Michigan State Athletics Hall of Fame in 2013.

Bullough was born in Scranton, Pennsylvania, and attended high school in Canton, Ohio. He was drafted in the fifth round by Green Bay in 1955 and played in 12 games as a rookie. After serving in the Army, he started in eight games for the Packers during the 1958 season.

Sons Chuck and Shane and three grandchildren — Max, Riley and Byron — played football for the Spartans.