Michigan State will face Texas Tech in the Final Four. 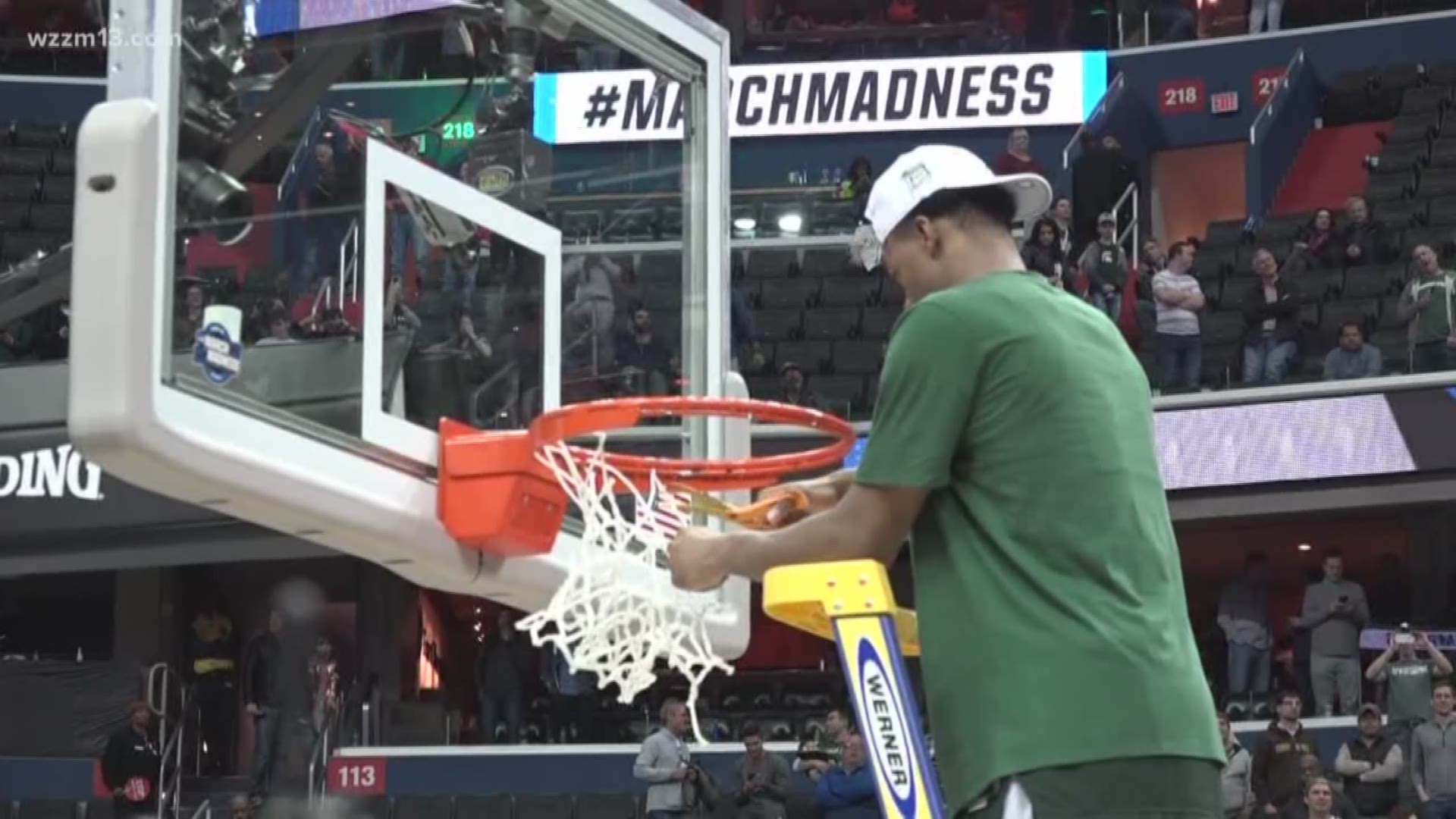 WASHINGTON — Cassius Winston missed an open jump shot but was right there for the rebound. Without hesitating, he stepped back and swished a 3-pointer.

The biggest moment for Michigan State is still to come after Winston led the Spartans back to the Final Four for the first time since 2015.

Michigan State beat Duke 68-67 on Sunday to knock the overall top seed out of the NCAA Tournament in what likely was the end of Zion Williamson's college career. Winston took over the game when his team faced its biggest deficit, stealing the show from Williamson with 20 points and 10 assists in a do-it-all performance fittingly with Magic Johnson there to see it.

"I was locked in," Winston said with smile and a piece of one of the nets tucked into his Final Four hat. "I wanted to do everything I could for my team to get us to that point. We've been working way too hard to stop now."

Winston didn't know how many shots he took but never hesitated to put the ball up. He was 9 of 23 and never shied away from taking it at Duke and shooting at nearly every opportunity in the East Region final.

The Big Ten Player of the Year and East Region Most Outstanding Player made or assisted on 19 of Michigan State's 30 field goals.

"Winston was the difference maker," Duke coach Mike Krzyzewski said. "He was either scoring or assisting. He's the best guard we've played against."

Williamson, the presumptive top pick in the NBA Draft and biggest star of this NCAA Tournament, had a game-high 24 points and 14 rebounds. He said it was a "high possibility" this was his final game at Duke.

"We're very upset, obviously, but congrats to Michigan State," Williamson said. "Just looking around the locker room and see your teammates, your brothers and you just think this group will probably never play together again."

Michigan State's veteran-laden team will have another chance Saturday in one regional semifinal against Texas Tech in Minneapolis. Virginia faces Auburn in the other.

"We're not done yet, and it feels good," senior guard Matt McQuaid said.

Winston carried the Spartans into the Final Four , but they received a huge boost from their oldest player. Kenny Goins, a fifth-year walk-on senior who missed his first four 3-point attempts, drained the go-ahead shot with 34.3 seconds left to put Michigan State up 68-66.

"I was out there, great pass, trusted it and let it go and it went down," said Goins, the only player left from 2015 when Duke beat Michigan State in the Final Four during his redshirt season. "As soon as I let it go, I knew it was good. I was ready to celebrate, but I knew I had to get back on defense."

Duke had the chance to tie but freshman star RJ Barrett missed the first of two free throws with 5.2 seconds left. Duke was helpless with only four fouls, and Winston was able to get the ball away from the Duke defenders and dribble out the clock.

"There wasn't enough time, so I tried to miss the second one and it went in," Barrett said.

As he wiped away tears, Izzo told the crowd, "I love you all, I appreciate you all. I'll see you in Minneapolis."

Izzo had to navigate foul trouble to big man Xavier Tillman, who was essential in guarding Williamson and factoring in on the offensive end. Tillman played 29 minutes and scored 19 points on 8-of-12 shooting.

Duke fell one step short of the Final Four after finally coming out on the losing end of a nail-biter. The Blue Devils won their previous two NCAA Tournament games by a combined three points and escaped in the final seconds only when their opponents missed at the buzzer.

"Everybody that beats Duke is ready to put that on the wall because that's the program that (Krzyzewski has) built," Izzo said. "I do think we beat arguably the best team in the country, but there's another game coming up."

Falling short likely ended the college career of Williamson, the freshman sensation expected to leave Duke for the NBA. Interest in Williamson has been so high that CBS dedicated a camera to his every move in the NCAA Tournament.

Barrett had 21 points — but not the one that could have sent the game into overtime.

"It's March Madness and people are going to fight their butts off to win this title," Barrett said. "They wanted it more than us."

Cam Reddish didn't start for Duke but the freshman was the first player off the bench two minutes in after being a game-time decision. Reddish missed the Sweet 16 victory against Virginia Tech on Friday with a left knee injury.

Reddish missed his first two shots before his two free throws gave Duke its first lead at 22-21 with 7:10 left in the first half. Reddish finished with eight points on 2-of-8 shooting.

"Obviously it was sore or whatever but I wanted to be out there with my guys," Reddish said.

McQuaid dunked the ball in the first half and in the second half had a 360-degree up-and-under layup that should be a regular feature on highlight reels.

"I don't know what got into me," McQuaid said.

While this is the Spartans' 10th Final Four, it's the first in program history for their opponent, Texas Tech, which beat Gonzaga to win the West Region.