The game was a rout, as expected.

Cassius Winston breezed smoothly toward the basket for a layup. Then he checked out of the game moments later, stopping for a hug with coach Tom Izzo on the way back to join his teammates on the sideline.

This was a weekend when basketball was put in perspective — but maybe provided a bit of comfort as well.

Playing a night after the death of his brother, Winston had 17 points and 11 assists to lift No. 1 Michigan State to an emotional 100-47 victory over Binghamton in the Spartans' home opener Sunday night. Zachary Winston, Cassius' younger brother, died after being hit by a westbound Amtrak train in Albion on Saturday night. He was a basketball player at Albion College.

Cassius Winston took his usual spot in Michigan State's starting lineup Sunday. The crowd observed a moment of silence in Zachary's honor, then Cassius assisted on Michigan State's first basket and sank his first shot, a 3-pointer from near the top of the key.

Izzo said he found out the news shortly after midnight, then spent several hours with Winston and his family. It wasn't clear if the star point guard would play.

"I guess if I was to be honest, I expected him not to play, but everyone grieves a different way, and we left it a hundred percent up to Cassius," Izzo said. "His brothers are the world to him. I've never seen a kid over my years that was as close with his brothers. Zachary grew up around the team so much. He grew close to all the guys."

The game was a rout, as expected. Michigan State (1-1) rebounded easily from its season-opening loss Tuesday to No. 2 Kentucky. Xavier Tillman scored 17 points for the Spartans, and Aaron Henry added 16.

Gabe Brown drew a smile from Winston when he scored inside while being fouled. That three-point play put the Spartans up 23-5. Then Winston made a nice pass up the court to Thomas Kithier for a layup.

Later, Winston stole the ball and flipped it across the court to Rocket Watts for a layup on a fast break. Tillman dunked off a lob from Winston to make it 31-13. It was 54-23 at halftime.

Izzo figured the game might have been an adrenaline rush for Winston.

"He was spectacular," Izzo said. "The assists he made in that first half, I caught myself saying, 'Wow.'"

Winston's final basket came when he shook past a defender and drove for a layup. He was taken out immediately after that, receiving a hug from Izzo and a standing ovation from the crowd.

Tillman and Kyle Ahrens were the two Michigan State players made available to reporters after the game. They were asked about their memories of Zachary Winston.

"Always made you feel good when you were around him," Tillman said. "He was not a selfish guy. He didn't talk about his problems a lot at all. He just focused on everybody else."

Izzo concluded his news conference with a bit of a lesson.

"When you leave here tonight, whoever it is — son, daughter, older mother, father, wife or husband — it would do you good to tell them you love them and you appreciate them," he said. "It would do you a lot of good, and any of the people closest to you, that you say that. You say it, and you say it, and you say it. Because one morning you wake up, and everything's one way, and by 9 o'clock that night, everything's another way. And then you don't get a chance to say it.

"So I told my team after I loved every one of them."

"There's not a lot of words," Dempsey said. "I just want to say that we're praying for them, and we're behind them."

The Binghamton program went through tragedy as well recently. Center Calistus Anyichie died in July in a drowning.

Binghamton: The Bearcats lost their opener to Cornell by 20 points, so this result wasn't exactly a surprise. They did manage 14 offensive rebounds but were outscored 54-16 in the paint.

Michigan State: This was a weekend when basketball was put in perspective for the Spartans, but Winston seemed to enjoy being on the court with his teammates, and the home crowd was determined to show its support.

The Spartans can expect to drop out of the top spot because of their loss to Kentucky.

Binghamton: The Bearcats play at Columbia on Wednesday night. 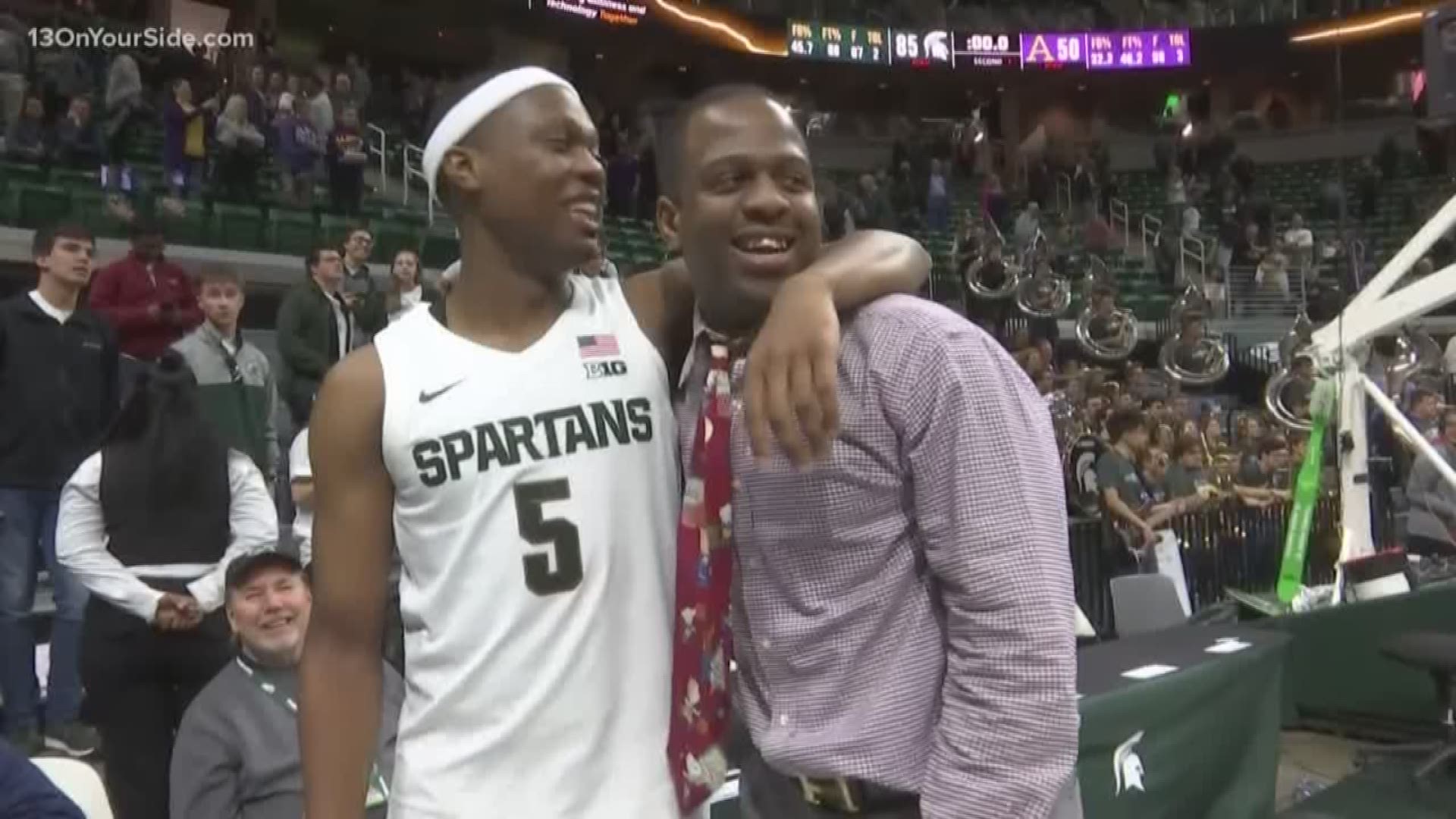