Michigan State coach Dantonio not thinking about his future

It would be a surprise if Dantonio were fired — he's won three Big Ten titles since 2010.

Credit: AP
FILE - In this Sept. 21, 2019, file photo, Michigan State head coach Mark Dantonio watches from the sideline during the first half of an NCAA college football game against Northwestern, in Evanston, Ill. Dantonio says he is not thinking about his future as Michigan State's coach as the Spartans prepare to face rival Michigan this weekend. Michigan State has lost four games in a row and will finish the regular season with at least five losses for the third time in four years. (AP Photo/David Banks, File)
Author: Noah Trister (AP Sports Writer)
Published: 10:28 PM EST November 12, 2019

EAST LANSING, Mich. — (AP) It's the type of question that comes up when a team has spent much of the last four years in mediocrity: Mark Dantonio was asked Tuesday if he spends time thinking about his coaching future at Michigan State.

For Dantonio and the Spartans, that means preparing for their biggest rival. Michigan State plays at No. 14 Michigan on Saturday, and if the Spartans are still capable of a last stand, this would be the time for it. Michigan State has lost four games in a row and will finish the regular season with at least five losses for the third time in four years.

It would be a surprise if Dantonio were fired — he's won three Big Ten titles since 2010 — but it's certainly fair to wonder if the 63-year-old coach can return Michigan State (4-5, 2-4 Big Ten) to its heights from earlier in the decade. Before he was asked a follow-up question about his future, he talked about how he handles criticism and speculation about the program.

"What people need to understand out there is that I have as much information as I can to do the job that I'm doing, and I'm going to try and do it with our players in mind," Dantonio said. "We're going to work hard, we're going to always stay positive, we're going to rise above it. That's the only thing that I can do."

One obvious way to change the conversation — at least for a little while — would be to beat Michigan. Dantonio has done that eight times in 12 tries since taking over the Spartans.

"It would put a sweet taste in everyone's mouth and make things feel a lot better than what they are right now," quarterback Brian Lewerke said. "Any win after a four-game losing streak would be big, but this one would be especially big."

Last season's game — a 21-7 Michigan win — was contentious. Before the game, the Spartans walked across the field with linked arms and made contact with Michigan players during warmups. The Big Ten fined Michigan State and reprimanded Michigan coach Jim Harbaugh for his postgame comments about the incident. Michigan linebacker Devin Bush tore up Michigan State's midfield logo with his cleats before the game.

"That's in the past in my mind," Dantonio said. "It's in the past. Those things have taken place, and I said on a radio show this week: 'If you don't like confrontation, this probably isn't a good game to go to.'"

On Monday, Harbaugh referred to Dantonio as a "master motivator" — and Dantonio was asked Tuesday to describe Harbaugh in two words.

"Intense," Dantonio said. "And I would say, intense."

The Spartans blew a 21-point lead in the fourth quarter and lost at home to Illinois last weekend. Lewerke took a hit in the second half of that game and said afterward Saturday: "Definitely rung my bell for a little bit, but I think I was fine."

"We didn't go through any protocol," Dantonio said Tuesday. "We looked at him very quickly. I asked him, and he said he's good, and he motioned that to our trainers as well."

"Neck hurts a little bit, but that's normal," he said.

He will not have tight end Matt Dotson as a target: Dotson is out for the season with a torn Achilles tendon. 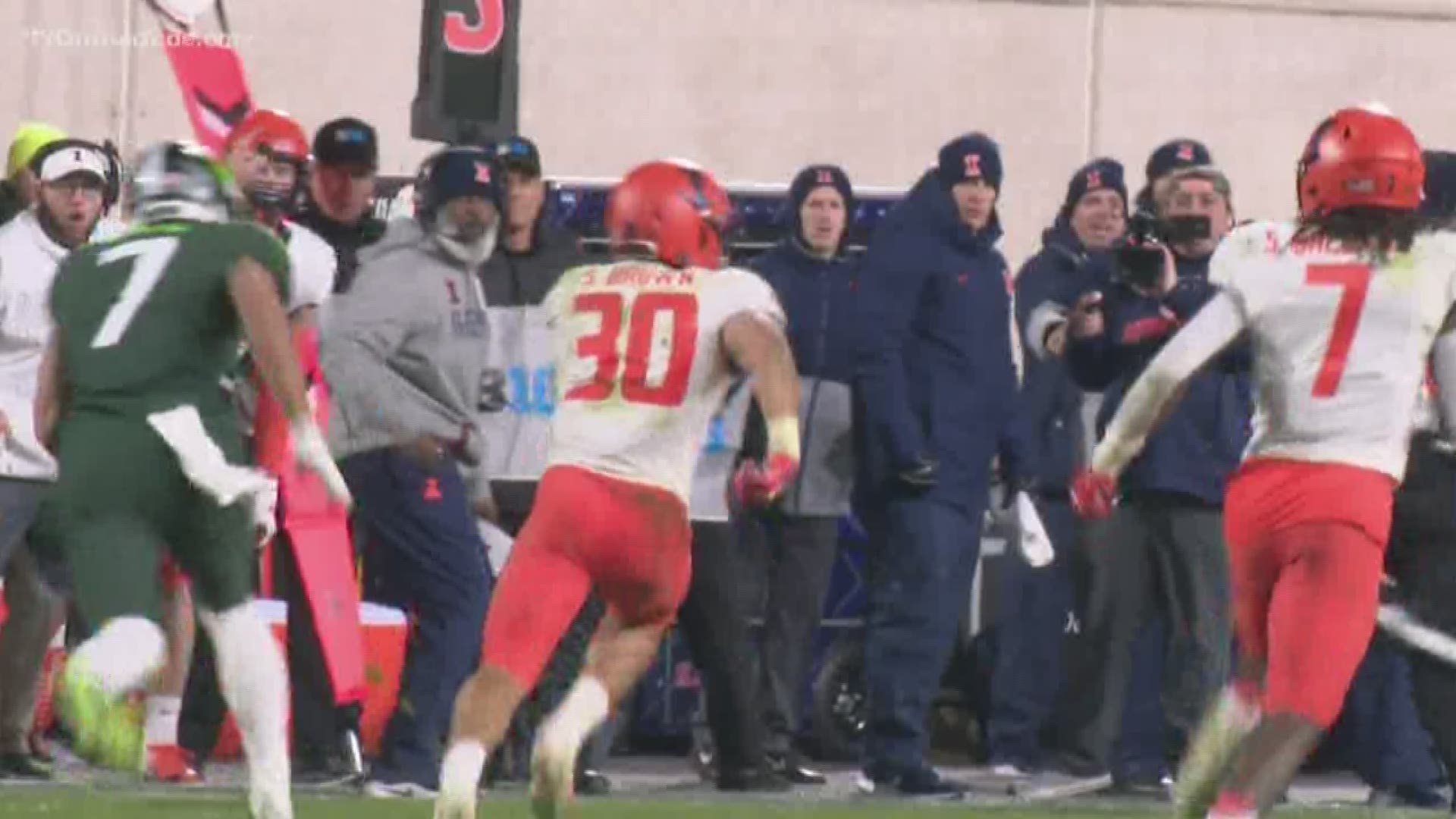 Other Michigan State stories on 13 ON YOUR SIDE: