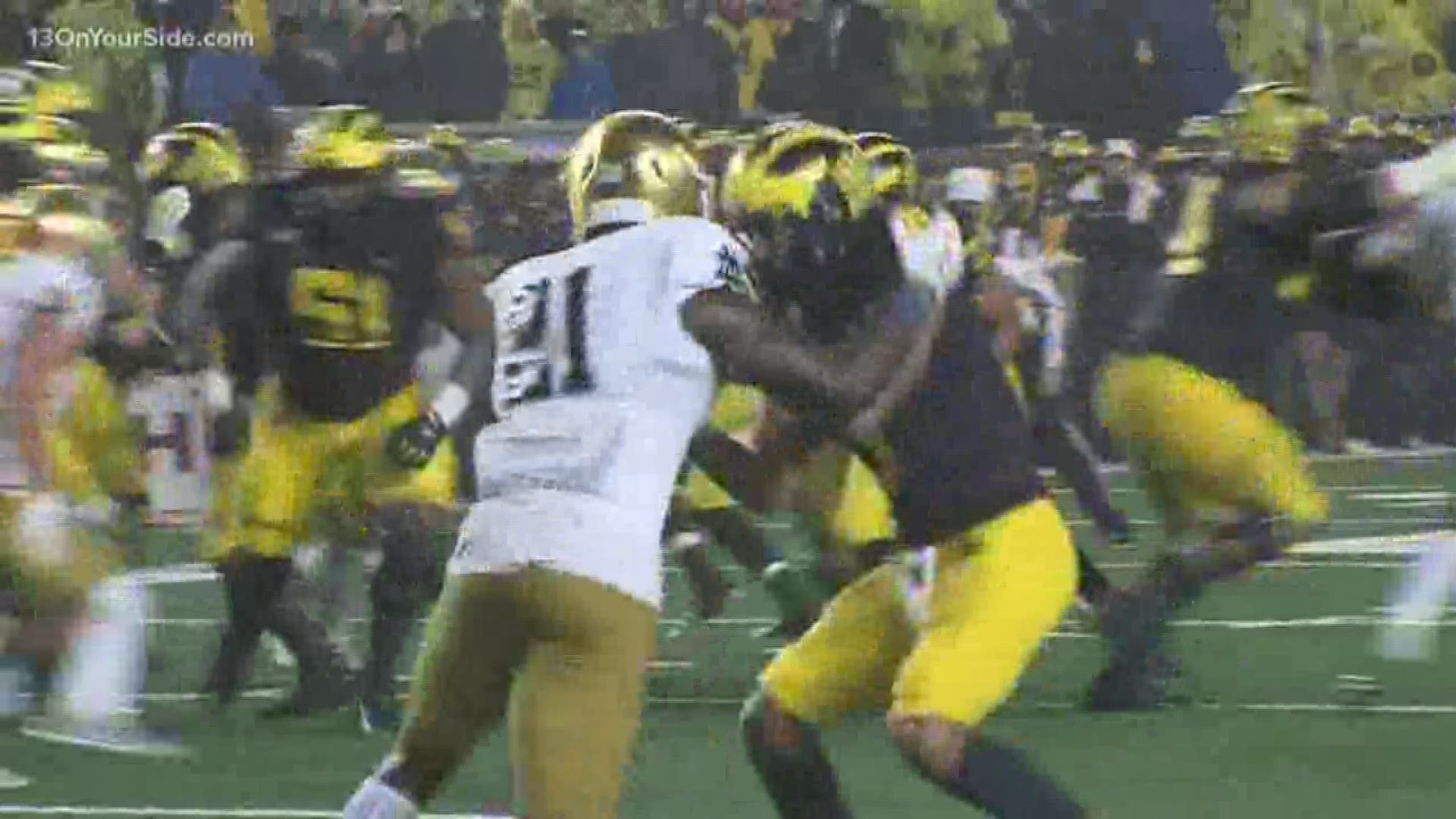 Zach Charbonnet ran for two touchdowns in the first half and Shea Patterson threw for two scores in the second half, helping No. 19 Michigan rout No. 8 Notre Dame 45-14 in driving rain Saturday night.

The Wolverines (6-2) ended an eight-game losing streak against top-10 teams under Harbaugh, who needed a signature win in his fifth season that likely won’t end with the Big Ten title he and college football’s winningest program desperately covet.

“Some of the tests that the team has gone through, you can make a lot of growth from it,” Harbaugh said.

With the lopsided loss, the Fighting Irish (5-2) knocked themselves out of the College Football Playoff picture on the rain-filled night that seemed to affect them much more than Michigan.

The Irish took advantage of a questionable call on pass interference to set up Ian Book’s 7-yard TD pass to Cole Kmet to pull within 10 points late in the third quarter.

Michigan responded with Patterson’s 8-yard touchdown pass to Donovan Peoples-Jones on the ensuing drive, which got off to a good start with Hassan Haskins’ 49-yard run. The former linebacker finished with career-high 149 yards on 20 carries.

@UMichFootball is having fun out there:

Patterson threw his second TD early in the fourth, connecting on a 16-yard pass to Nico Collins, to put Michigan ahead 31-7.

“We played our best game,” Patterson said. “When we do that, we’re a really tough team to beat.”

On a windy and wet night, it was difficult to throw the ball and Michigan’s defense made it tough for the Irish to run.

Book was 8 of 25 for 73 yards the senior’s lowest total since last year’s opener when he threw just three passes and TD that averted a shutout.

“We knew once we hit (Book) a couple times we knew that he was going to be jumpy in the pocket,” Michigan safety Josh Metellus said. “I know what this defense is capable of. We can shut anybody out. If everybody is locked in, doing their job, we can shut out anybody in the country.” 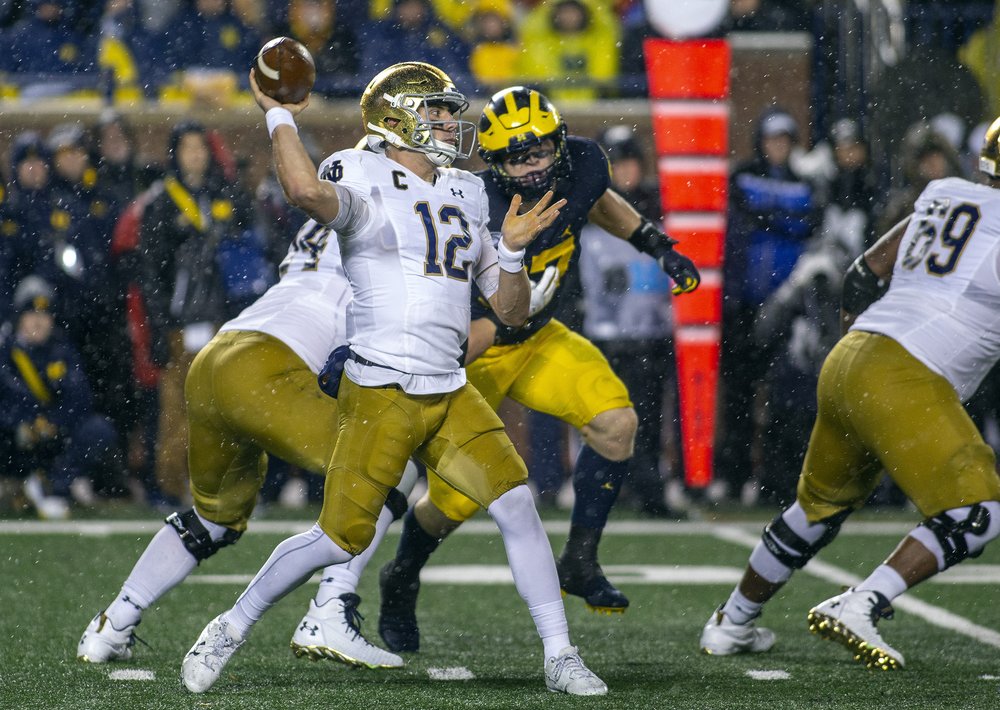 With the game out of reach, Kelly put in sophomore Phil Jurkovec and he threw a 14-yard TD pass to Javon McKinley late in the game to cut the deficit to 31 points.

Notre Dame’s Tony Jones Jr. was held to 14 yards on eight carries, reminiscent of the game he had in a loss to No. 3 Georgia last month when he had just 21 yards rushing on nine carries. Jones ran for 100-plus yards in his previous three games before being shut down by the swarming Wolverines and being slowed by an undisclosed injury during the game.

The Irish had just 180 yards of offense.

“It wasn’t necessarily that they threw anything at us that we weren’t ready for, we just didn’t hit our standard of offense,” Kelly insisted.

“The type of offense that they run, they try to stick to the same type of script, give the same guys the ball,” he said.

Notre Dame: It has been a long time since the Irish beat a top-20 team on its home field. Since beating No. 8 Oklahoma on Oct. 27, 2012, they have lost 11 straight true road games against teams ranked among the top 20.

Michigan: A much-needed boost of confidence was earned, setting up the team to potentially close the regular season strong. The Wolverines host rivals Michigan State and Ohio State along with road games against Maryland and Indiana.

Michigan will make a jump in the poll and Notre Dame will probably plummet.

On the same day the schools completed their two-game deal, they announced Michigan will host Notre Dame in 2033 and the Irish will play the Wolverines at home in 2034.

“It feels good that we can talk about this for 14 years,” Michigan center Cesar Ruiz said.

Notre Dame junior receiver Michael Young, amid reports he will transfer, didn’t travel to Michigan and Kelly said there would be a discussion about his status with the team moving forward. Young had six receptions for 21 yards this season and started one game