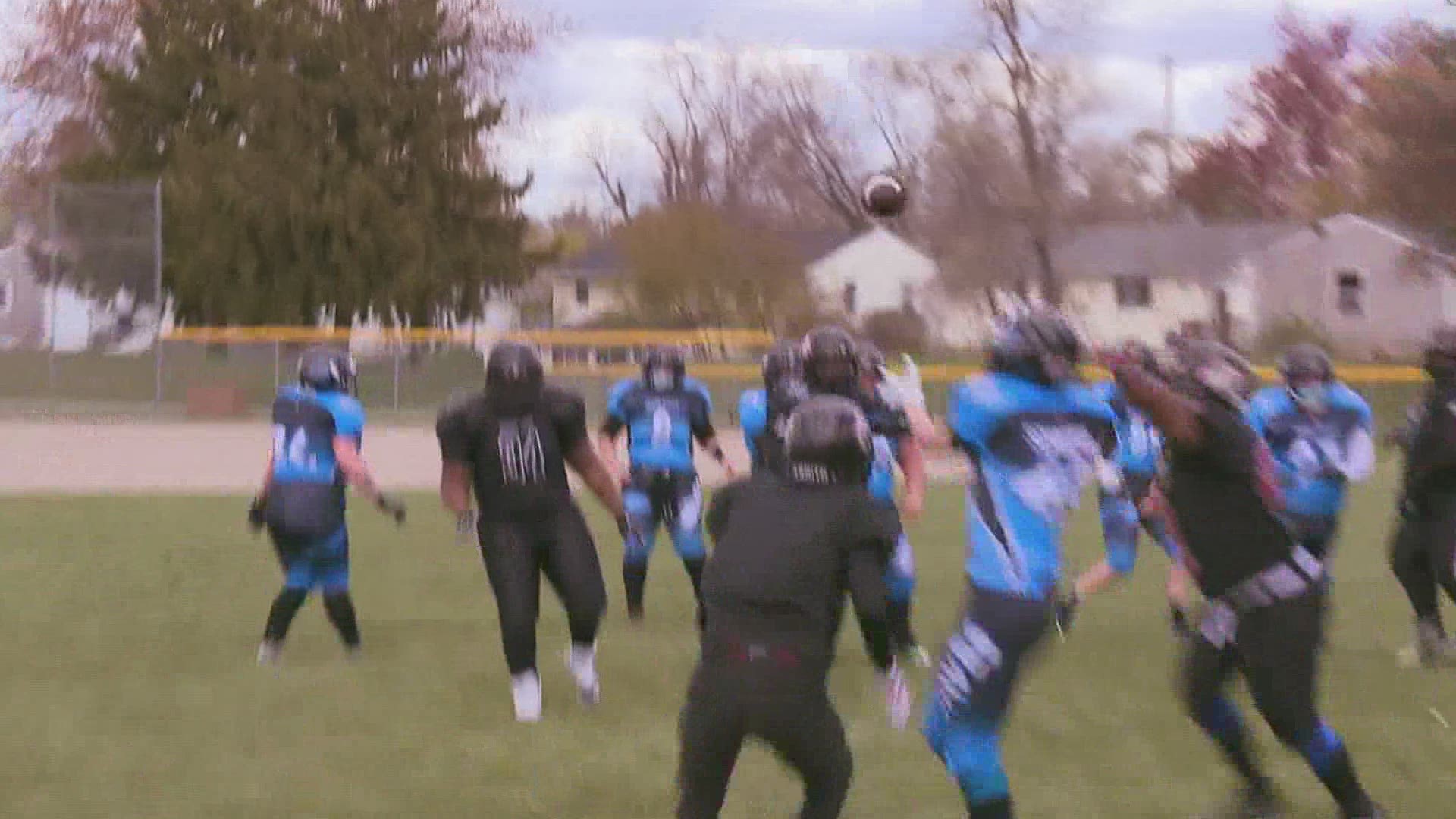 GRAND RAPIDS, Mich. — They all start as strangers, coming from all walks of life. They’re all drawn to that sound of whistles blowing, that feeling of helmets clashing and pads popping.

And they realize that they all have something in common. Take Pamela Blazo for instance.

"I’ve always been interested in the game but it was really never an option for me growing up."

Or Ambra Mason- “I always wanted to play, since I was little, but never could.”

After COVID-19 canceled their 2020 season, the Grand Rapids Tidal Waves, a women's tackle football team, are set to begin their fourth year of existence with a renewed hunger.

Workman, a wide receiver and defensive back says the game is therapeutic. "You let your frustrations out on the field, you bond together as a sisterhood with the players and your teammates. This is it. Grand Rapids, the Tidal Waves, they’re doing something right, they’re drawing people in. Honestly, I mean, everyone should want to be a part of this."

Blazo serves as the team's President and Co-owner. She says she noticed a lot of women were traveling as much as three hours round trip to play elsewhere in the state and she was moved to action.

"I was playing in Flint at the time and I had heard rumors about a team starting up in Grand Rapids and I looked into it. The more I was talking to those people, it wasn’t going to happen. If we’re going to have a team in Grand Rapids, I have to step up and I have to do this. I Started making some phone calls and putting things together. It’s been a lot of work but it’s been very rewarding."

The arrival of a team in Grand Rapids in 2018 was right on time for several of the roughly 30 players on the roster.

“I wish I would’ve started younger if I would’ve found it earlier in life," says Mason, a noseguard with six years of playing experience. "But at the same time I believe that everything happens for a reason so I found it when I needed to find it.”

The Tidal Waves play in the Women’s Football Alliance, which was founded in 2009. The WFA is a national league consisting of over 65 teams, making it the largest and most competitive women’s tackle football league in the world.

“Competition level, it’s up there," says Blazo, who plays quarterback and linebacker. "This is not a powderpuff league. It’s college rules, full tackle and we bring it. We bring it every Saturday.”

Women’s tackle football in West Michigan has a long history, dating back to the 1980’s, and a team called the Grand Rapids Carpenters, who won a national championship in 1985. This new batch of players is committed to keeping the Tidal Waves around, not just to play football, but to enrich their communities as well through community service, like the kids food basket drive the team is holding at their home opener on May 1st.

Mason is particularly dedicated to inspiring younger women to carry on the sport. "The fact that I can be a pillar and be a role model for the younger generation is kind of cool.”

Other than playing for the love of the game, Mason and her teammates also want to continue to change the stigma of women's football and show everyone that hit, block, run and tackle just like the men.

"I would just say in general that women can do the same thing that men can do .Let us know that we’re here. We know what we’re talking about, it’s not like 'oh look at the little guy over there in the cute shorts.' We actually know the game, we understand the game and just give us all the respect we deserve and they get as well.”

Workman feels the exact same way. "Sports have made great strides in terms of women at the professional level, football hasn’t gotten there yet. I want to see it happen. If not me, then generations down the line, I want to put in the work to make sure that happens."

As Workman and the Tidal Waves prepare to crash into another season, she  hopes more and more people take notice, that her team and the league is for real.

"The Tidal Waves, they’re doing something right, they’re drawing people in. Honestly, I mean, everyone should want to be a part of this."

For Pam Blazo, the woman who helped bring it all together, she wants to continue to enjoy the game and all that it brings.

“For me it’s the team aspect. I love a challenge. I love being part of a team. It’s been a lot of work but it’s been very rewarding."

The Tidal Waves play their home games at Northview high school. Their season kicks off on Saturday May 1.