Hope fights on, despite no chance at a national championship

Unbeaten Dutch have rediscovered their love for the game 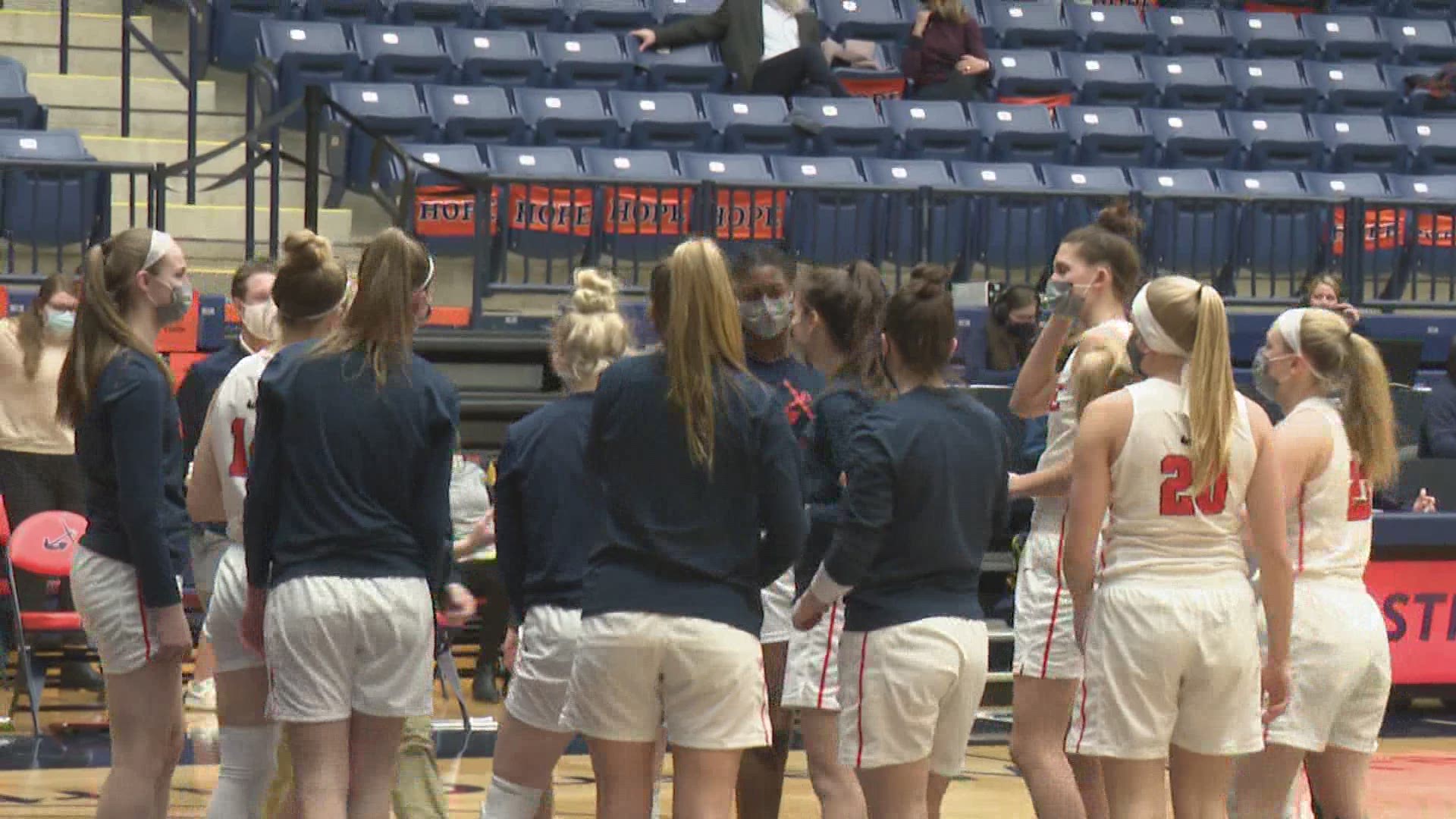 GRAND RAPIDS, Mich. — The Hope women’s basketball team is undefeated and ranked number one in the country. In some ways, things look absolutely normal for them. But just getting to this point, took strength they didn’t even know they had.

On the night of February 17th, in front of an almost empty gym, the Flying Dutch took the floor, hoping to avoid just going through the motions.

“In a strange way there’s been some pressure that’s been removed." said senior guard Kennedy Schoonveld.  "I just want to go out and have fun. That’s been really nice, like a weird, different change of pace.”

Last March the Dutch had a record of 28-0 and they had just advanced to the Sweet 16. That's when they found out their season had ended earlier than they ever could have imagined.

“Last spring," said head coach Brian Morehouse, "it was definitely a difficult situation where we get canceled. We’re in the national tournament and then we have to focus all our energy forward. We’re thinking 'we're going to bounce back from this, we’re going to prepare, we’re going to be really good next year'.”

Then came the summer of change: workouts wiped out, team bonding canceled, their sense of normalcy gone.

Senior center Oliva Voskuil said that took a toll on the team. “It was a lot more anxiety-ridden than I think people expected. Like our coaches, I don’t know if they understood what we were going through with all these thoughts in the air and dealing with these emotions. I think it was harder than people realize.”

A new season would offer a fresh start, but on February 3rd, after a win over 5th ranked Trine, a familiar conversation had to be had. Before Morehouse  could address the team, assistant coach Courtney Kust pulled him to the side. "Courtney grabs me by the shirt and she tugs on my shirt sleeve and she said 'hey, before we walk back there you've got to know this' and I said 'what? what is it?' And she said 'the NCAA tournament got cancelled.'"

"It was devastating to watch that group of people. For the second year in a row I have to deliver that message. It was the toughest locker room I’ve ever had in 25 years."

For the players there was simply heartbreak. Again. Mostly for seniors like Schoonveld.

“I was super shocked. All year you kind of want to assume the worst but expect the best. I think all of us, especially us nine seniors on the team were hoping at least we’d have some chance to play in some kind of tournament.”

Despite the fact that they had now lost out on a second straight chance at a national championship, the members of the 2020-2021 team were determined not to be deterred. Without the burden of winning titles hanging over them like banners, the joy of the game returned.

"I feel like this year, all I can do is go out there and have fun," said Voskuil added. "Which is kind of what I grew up wanting basketball to be about and all these pressures have been removed."

Before the season, Morehouse asked his players to write a paper, detailing their goals for the upcoming year. In an unintended touch of prophecy, a few seniors chose not to write about stats or individual accolades and honors, instead they wrote about how they were going to impact their teammates.

When reflecting back on that assignment, Schoonveld can't help but smile. “This year honestly more than ever, leaving a legacy of leadership and building relationships and pouring whatever you have learned into younger players has been a big deal. “

And Voskuil, a Holland native herself who understands the tradition of Hope basketball, said the team's bond grew stronger.

“Even with COVID being what it has been I’ve still been able to leave the legacy that I want to leave in that respect.”

Now here they are, winners of 38 games in a row. Six wins away from tying the school’s all-time mark. But at a program that prides itself on competing for titles, victories on the court have no longer become the main goal.

As Morehouse sat in his office, surrounded by trophies and mementos, he thought about more than just the outcome of a few games. "You see the evolution of these women not just as basketball players, but as human beings, and things that they’re going to take with them for the rest of their life, Jamal.”

This season has become about life beyond the court, about handling adversity and thriving. As he expects his players will do after they've left the program.

“To deal with the emotions of loss, of struggle then hope and then struggle then loss then continue to go. If I’m a grad school, if I’m an employer, I want these women to be a part of my group.”

The best women’s basketball team in division three has continued to go beyond the game, to ensure their success.

We’re still winning championships," he added. "They just look a little different than the ones that go on the scoreboard."