This couple didn't just get engaged at Busch Stadium Saturday night. Thanks to Yadier Molina and company, they got a one-of-a-kind memory for a lifetime 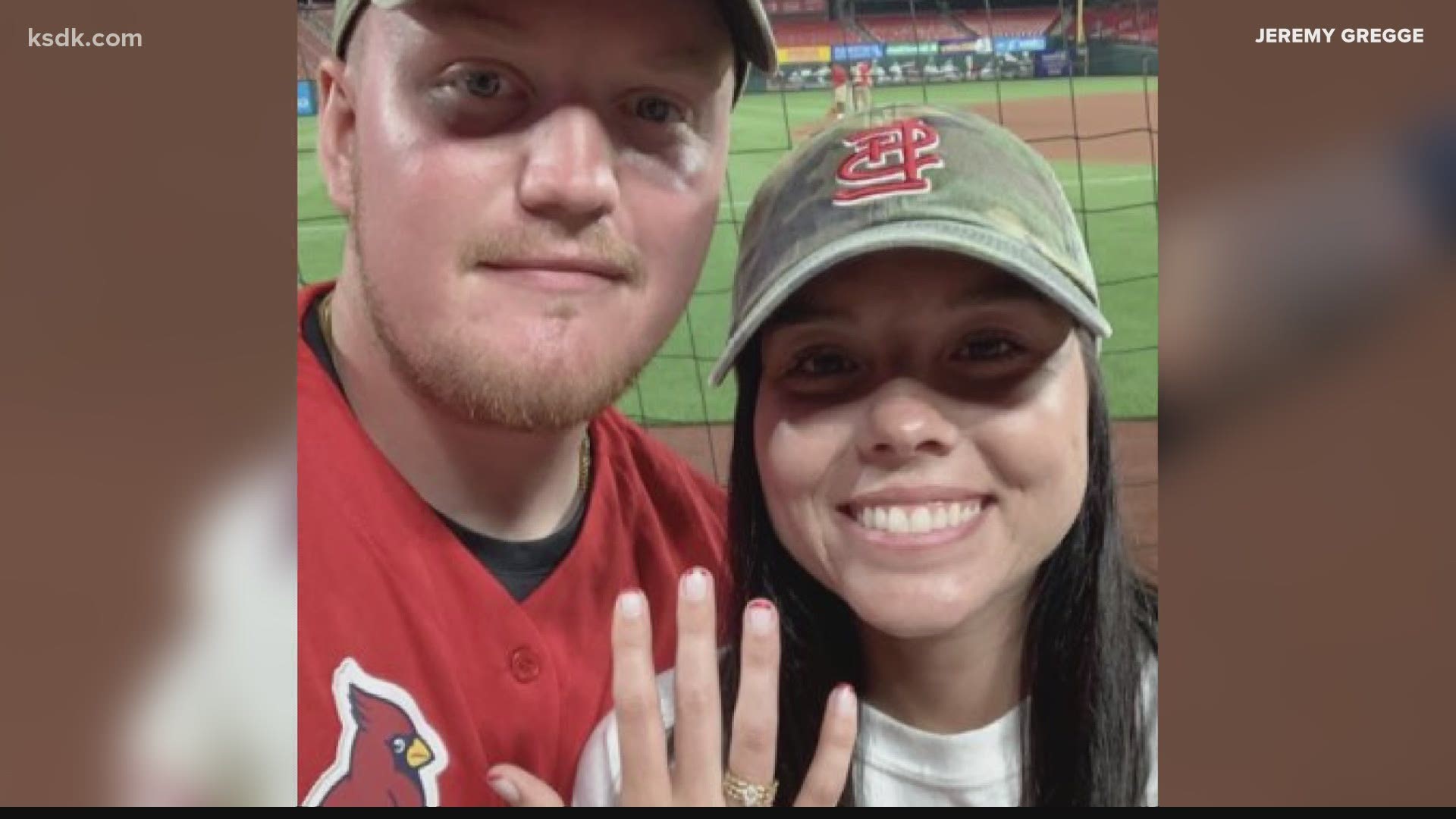 ST. LOUIS — Jeremy Gregge always knew he was going to propose to his girlfriend Erica Pulley at Busch Stadium. It just seemed too perfect.

"Ever since we started dating," Gregge said about knowing he wanted to propose at the ballpark. "We went to a couple Cardinals games and her uncle collects Cardinals stuff and every picture in the photo album she's wearing Cardinals stuff."

"Ever since we started dating two years ago, I kind of made him into a Cardinals fan more," Pulley said. "I'm a diehard Cardinals fan and Molina is my favorite player."

But this couple from Marion, Illinois, had no idea just how perfect their special moment was going to be.

After communicating with a Busch Stadium cameraman, Jeremy put his plan into action in the bottom of the seventh inning. The ring may have gotten stuck in his pocket at first, but eventually he popped the question with all of Busch Stadium watching. Of course, Pulley said yes, but that's when the magic really took over.

At the plate was Yadier Molina, Pulley's favorite player. He looked up to the engagement unfolding on the video board and stepped out of the box, smiling at the couple.

Four pitches later, Molina launched a go-ahead home run to left field off Cubs pitcher Adbert Alzolay. It was the deciding blow of the 2-1 Cardinals win.

After the game Molina gave another shout out to the couple who shared in the unforgettable moment.

"Most of the time I don't look at it (the video board). And this time I looked at it and was hoping she would say yes. Poor guy if she said no. I was happy for them," Molina said. "Obviously that moment for them was unbelievable. Especially after the home run. I wish them the best for the wedding."

For Gregge and Pulley, their story was just getting better and better.

"You can't make that stuff up," Gregge said. "You definitely can't plan it that's for sure."

"People were coming up and saying congratulations after the game like so many people," Pulley said. "And they would say, 'Yadi smiled for you guys! Thanks for the win!' And we were like, 'You're welcome!"

But then a great story got even cooler thanks to some friendly Cardinals fans sitting next to the newly-engaged couple.

Another couple a few rows from Gregge and Pulley bought them a game-used base from Saturday night's game, complete with the match-up and date on the side of it.

"He came back with a base and said, 'This is your first engagement present,'" Gregge said.

Gregge and Pulley said they hadn't known the couple who gifted them the base before that night, and were blown away by the gesture.

"We took their information down. They're going to get an invitation to the wedding," Gregge said.

There's ballpark engagement stories, and then there's what Gregge and Pulley experienced Saturday night. And they know their moment was something truly special.

"We watched the video of Yadi basically giving us his blessing for our marriage and we're just so thankful and eternally grateful for that moment," Pulley said. "It's something we'll cherish forever."