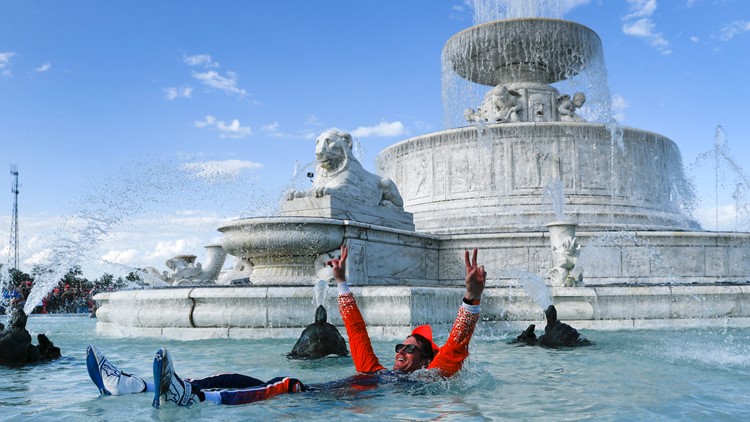 DETROIT — Scott Dixon has had a lot of memorable days as a five-time IndyCar season champion.

There's a good chance, though, it will be easy for him to remember what happened Sunday.

Dixon won the Detroit Grand Prix, his first victory of the year and 45th of his career, just hours after being honored by Queen Elizabeth II.

The Chip Ganassi Racing driver from New Zealand finished nearly 2 seconds in front of rookie Marcus Ericsson, who had his best finish on the IndyCar series. Will Power was third followed by, Ryan Hunter-Reay and Alexander Rossi.

Power's performance was impressive because his car stalled on lap four.

Dixon bounced back after failing to finish a race for the first time in two years on Saturday, hitting a wall after just 23 laps.

"I felt like a bit of an idiot yesterday," he said. "Today was all about redemption."

And when Dixon got to victory lane, Pittsburgh Steelers coach Mike Tomlin was there for the celebration.

"I got to briefly shake his hand before the race and that was it," Dixon said. "I hope he's coming to Texas next week."

Earlier in the day, Queen Elizabeth II announced Dixon will be honored with the Companion of the New Zealand Order of Merit in recognition of his services to motorsport. He will receive the award at Buckingham Palace.

Britain's monarch honors national and commonwealth individuals for their contribution to society in June and on New Year's Day.

"It's definitely a huge honor and totally different to any kind of racing accolade I've had," Dixon said. "I think of being very lucky and fortunate on the racing side of things. I've achieved a lot. But to get recognition like that, very few people do."

"The guys did a great job just fixing it," Pagenaud said. "We got back in the race and we scored six points, which could be important at the end. "

Pagenaud, who entered the weekend leading the series in points, finished sixth Saturday.

"I don't want to sound too disappointed because I won the Indy 500," he said.

Josef Newgarden, who won Saturday on Belle Isle, was able to return to the race after being knocked out of it following an accident with James Hinchcliffe and finished 19th in the 22-car field.

"I can't blame anyone," said Newgarden, the IndyCar points leader. "It's my fault. I should've gone left, not right."

Felix Rosenqvist spun out late in the 70-lap race, bringing out a red flag to potentially set the stage for a dramatic finish on the 2.35-mile road course.

Dixon refused to lose the lead.

The race resumed with four laps to go and no one could catch Dixon's Honda-powered car.

That has happened a lot during his career.

The 38-year-old Dixon trails just A.J. Foyt (67) and Mario Andretti (52) in IndyCar wins and only Foyt (seven) has won more championships in the open-wheel series. Dixon won for the third time on Belle Isle, tying Helio Castroneves for the most victories on the road course along the banks of the Detroit River.

Dixon took the lead midway through race when rookie Santino Ferrucci went in for his first pit stop. Ferrucci led for 20 laps after being out front for only one lap this year, briefly racing in front of the pack last week at the Indianapolis 500, and finished 10th.