Logano and Truex were up front on the restart, along with Kurt and Kyle Busch, and Logano pulled ahead in his No. 22 Ford. 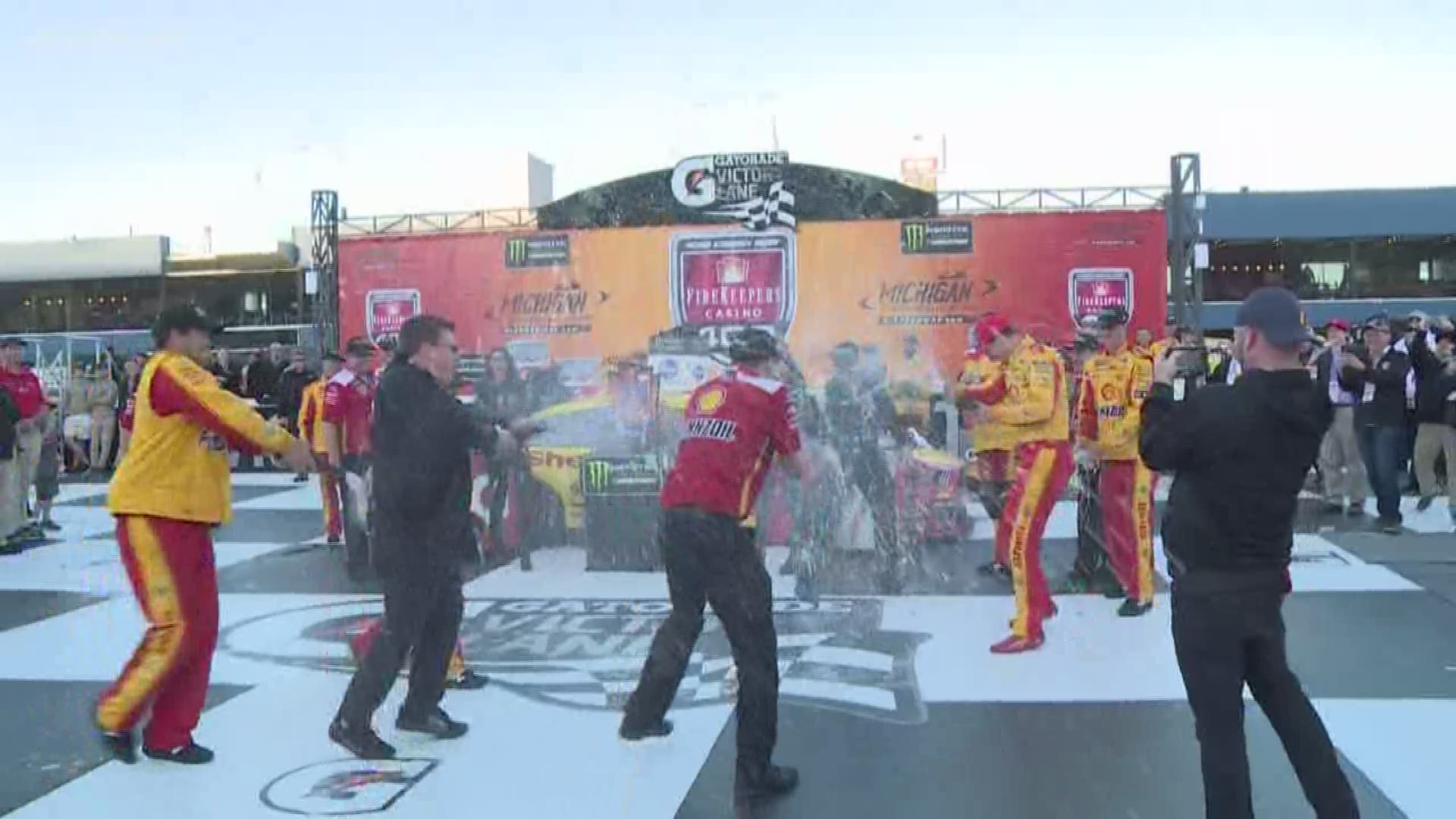 BROOKLYN, Mich. —  Joey Logano won the pole in qualifying and then led for more than three-quarters of the actual race.

It was an impressive display, but all that could have gone for naught if he hadn't been sharp on one final restart.

Logano won his second NASCAR Cup Series race of the season, holding off Kurt Busch and Martin Truex Jr. in overtime Monday at Michigan International Speedway. Logano was trying to hold on to a dwindling lead over Truex and Busch with five laps remaining, but around that time, Erik Jones went onto the grass, bringing out the caution flag that forced overtime.

"As the leader, you're like, 'Ohhhh.' Right?" Logano said. "But the race fan part of me is like, 'Heck yeah, this is going to be a great race for everyone to watch.'"

Logano and Truex were up front on the restart, along with Kurt and Kyle Busch, and Logano pulled ahead in his No. 22 Ford.

"He jumped the restart by over a car length," Truex said. "I don't know. I guess they don't enforce those rules anymore. We'll have to remember that for next time."

Logano, not surprisingly, had a different view.

"I was able to see it right in front of me. I hit it when I got there," Logano said. "I had a good start though, wasn't it? That was a good one. That one felt good."

NASCAR said it reviews all restarts and did not find anything problematic with this one.

It was the third win in a row for Ford at MIS. This was the 100th race at Michigan for NASCAR's top series.

The race was held Monday after being rained out Sunday.

Logano won the first stage but had to pit toward the end of the second. Austin Dillon won that stage.

It was a dominant visit to MIS for Logano, who led a track-record 163 laps in the race. The previous mark of 162 was set in 1989 by Rusty Wallace — although Logano's race was extended by the overtime.

"I really wanted it to go green at the end with Truex," Busch said. "I was going to push him straight through the 22."

Logano won for the 23rd time in his career and took over the points lead from Kyle Busch. Kurt Busch finished second Monday, followed by Truex, Daniel Suarez and Kyle Busch.

"You don't have days like that, that are so close to perfect. That doesn't happen very often in our sport," said Logano, the defending series champion. "I'm very proud of the effort that we've had really the last few weeks, from the execution side. But this time we had the speed and had the execution going along with it."

Logano earned Team Penske's fifth Cup victory of the season. Owner Roger Penske was in Washington, where Simon Pagenaud was welcomed to the White House in recognition of his Indianapolis 500 victory.

Joe Gibbs Racing has nine Cup wins this year and put two cars in the top five at Michigan: Truex and Kyle Busch.

Clint Bowyer and Kevin Harvick, who won the two MIS races last year, remained winless this season. Bowyer was out of it after he went into the wall early in the final stage. Harvick had to pit toward the end of the first stage with a loose wheel. He worked his way back into contention but finished seventh.

"We had a really fast Busch Light Ford and just made a lot of mistakes today," Harvick said.

The series takes next weekend off before resuming June 23 at Sonoma. Truex won there last year.