Popovich declined explain his decision to stand for the anthem, but reiterated his commitment to the cause of racial justice. 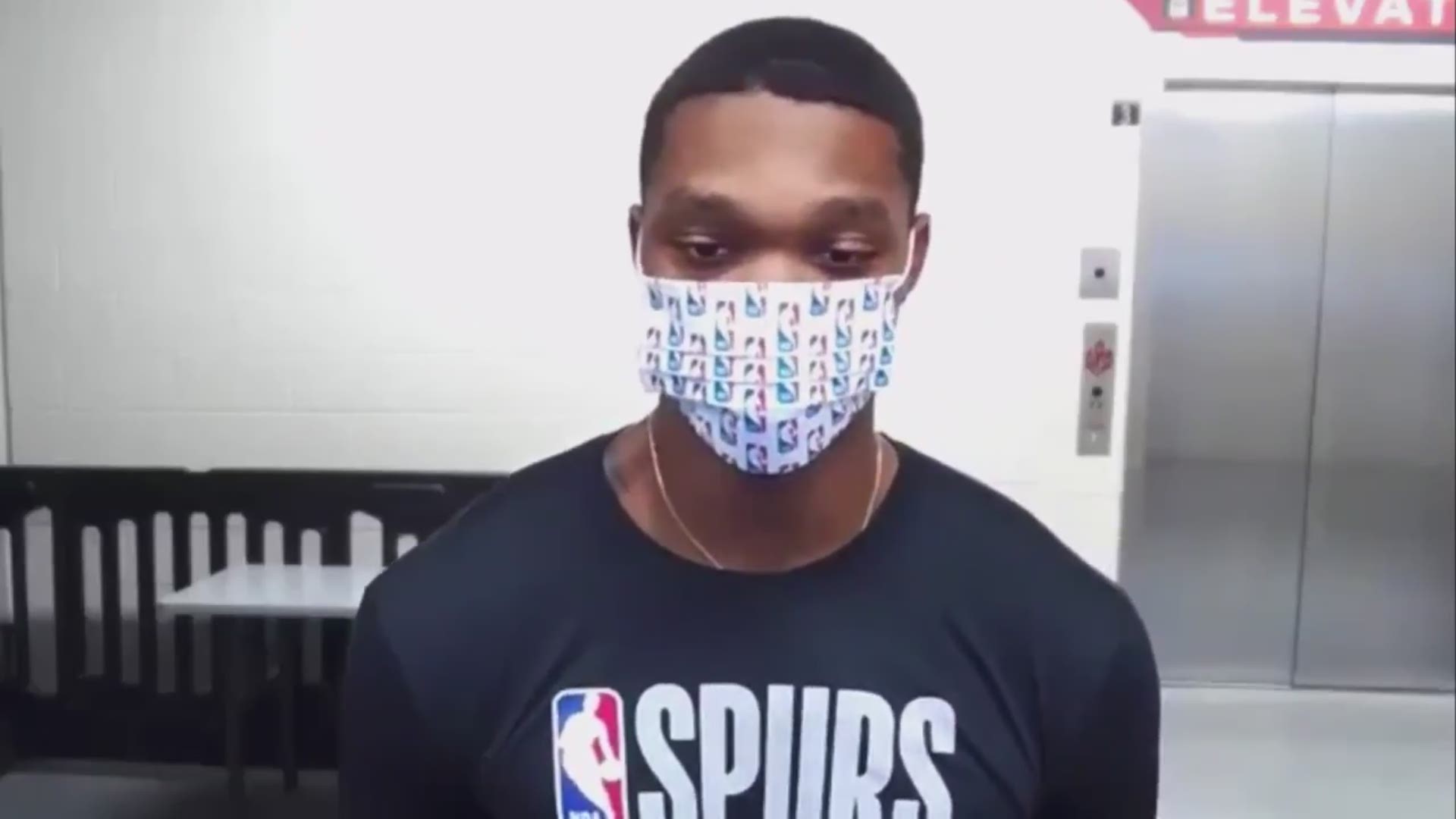 ORLANDO, Fla. — All of the players on the Spurs kneeled for the national anthem, while Gregg Popovich and Becky Hammon stood.

After the game, Popovich declined explain his decision, but reiterated his commitment to the cause of racial justice.

"I'd prefer to keep that to myself," Popovich said. "Everybody has to make a personal decision, and the league's been great about that. Everybody has the freedom to react any way they want. For whatever reasons I have, I reacted the way I wanted to."

Gregg Popovich and Becky Hammon are the only two people on the court standing. pic.twitter.com/Zz2XWCKGkm

"Our main emphasis here is making sure that we keep the momentum for Black Lives Matter, for racial justice, and that's going to continue throughout the entire playoffs," Popovich said. "Things get lost sometimes, and we don't want this to be one of those things."

After the game, DeMar DeRozan was asked about the demonstration, and said he had no doubts about where Popovich and Hammon stand on the issues of racism and social justice.

"It's all genuine, it's all out of the positive side of their heart, the same way we kneeled," DeRozan said. "Pop speaks out. When it comes to Becky, she's been front line on equality since I've been a fan of hers in the WNBA. Everybody has their own right to make a statement, and you can't vilify nobody for not doing what the other group is doing."

Derrick White chipped his tooth during the 129-120 win over Sacramento, but put it into perspective after the game.

"A chipped tooth is nothing compared to what’s going on right now in society. So, I’m thankful to be here living still, some people haven’t got that opportunity,” said White, who dedicated his stellar performance to Elijah McClain, who was killed by police in his home state of Colorado.

"I had Elijah McClain on my shoes, so I wanted to show out well for him and his family because he obviously unjustly died," White said.

"You'll just have to wait and see."

Dejounte Murray kept it vague when asked if he and the Spurs planned to demonstrate against racism when they take the court for their first meaningful game in more than four months.

Before the Utah Jazz and New Orleans Pelicans tipped off the NBA restart on Thursday night, everyone linked arms and kneeled around the phrase "Black Lives Matter" on the court during the national anthem.

The @PelicansNBA & @utahjazz kneel for the National Anthem ahead of the NBA restart. pic.twitter.com/TCFolP06HM

The Lakers and Clippers did the same before the start of their game.

The @Lakers and @LAClippers kneel during the National Anthem. pic.twitter.com/A0OdsXNKm3

Murray voiced his approval of the previous night's demonstrations.

"It was good. They were together as one," Murray said.

At practice on Wednesday, Spurs players said the team had yet to discuss their plans for demonstrating during the anthem, but they supported the other teams doing it and they expected it would come up internally.

"I respect and appreciate those two teams, and I'm pretty sure there are going to be other teams that come together, that do something as well during the national anthem," DeMar DeRozan said.

In the first game on Friday between the Brooklyn Nets and Orlando Magic, all of the players kneeled except for Orlando's Jonathan Isaac. Players for the Memphis Grizzlies and Portland Trailblazers also kneeled on Friday.

Players, coaches and refs lock arms while kneeling during the national anthem before the Grizzlies-Blazers game pic.twitter.com/E0EQEnWV03

When asked just before the game if the Spurs planned any demonstrations during the anthem, Head Coach Gregg Popovich said that it was up to individual players. He has remained an outspoken advocate for racial justice.

"Considering what's going on in our country with race, it's always been our national sin. It's always been something that has never been faced as well as it should have been," Popovich said. "With the events that we've all witnessed in this last year, it's just logical and wise to try to keep that momentum going and try to keep this on the front burner, because it is a national embarrassment. It keeps us from being the country we should be, and the country that was promised to everyone. Nothing could be more poignant than to have all of the teams here all committed to making statements and letting it be known that this has got to change, and not just a little bit."

The Air Force Academy graduate has shared his thoughts on Colin Kaepernick's protest since as far back as 2016, saying that kneeling during the anthem isn't about the flag or the military and that the military protects the right to peacefully demonstrate in that way.

Many players are replacing the names on the backs of their jerseys with messages of social justice. At shootaround Friday morning, Spurs center Jakob Poeltl explained why he chose "Black Lives Matter" as his.

Jakob Poeltl on why he chose to put “Black Lives Matter” on his jersey:

“I think it’s important for everybody to share that message, it doesn’t matter what the skin color is. It’s a sign of us sticking together, no matter who we are, no matter where we come from.” pic.twitter.com/bGCoMqHUrj

When asked about the meaning of "Black Lives Matter" earlier in the week, Coach Popovich said it was about justice.

“It’s no different for me than it is for anybody else who cares about justice, and who can be empathetic to the fact that justice has been denied to a group of people for far too long.”

He says people offended by that are ignorant. pic.twitter.com/TestJ4fMvX

“It’s no different for me than it is to anybody else who cares about justice and who can be empathetic to the fact that justice has been denied to a group of people for far too long, and enough is enough,” Popovich said. “Everybody’s tired of it, especially the group that has been degraded and savaged for so long. People who don’t understand Black Lives Matter or are offended by it are just ignorant.”