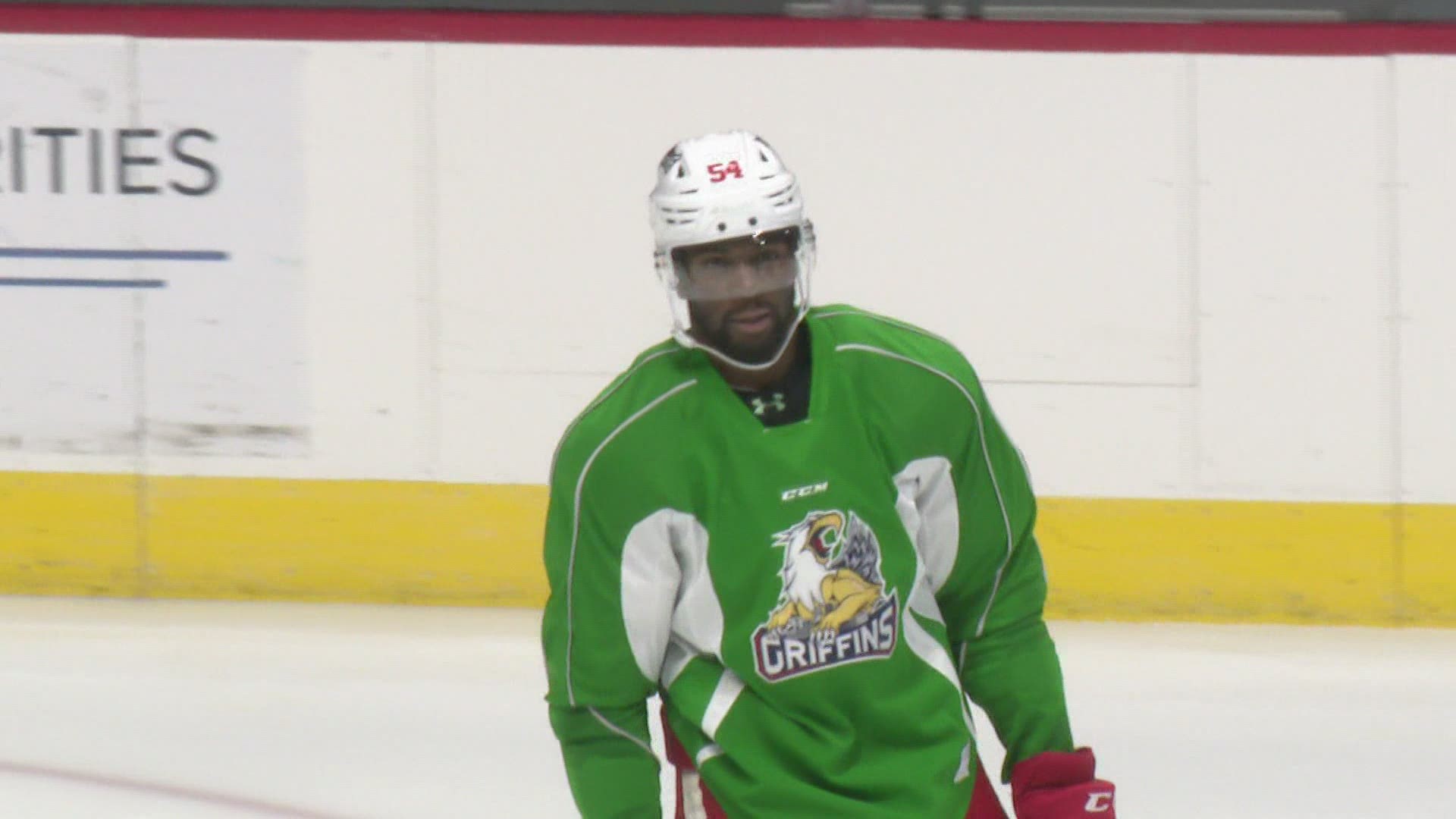 Griffins forward Givani Smith certainly knows how to use his physicality to his advantage. He’s never been one to back away from a fight. But the third-year pro is growing more comfortable fighting outside the rink for equality for the next generation of hockey players.

"There’s a line in hockey," Smith says. "'You have to earn respect.’ I definitely do get more comfortable on voicing my own opinion as I keep carving my own career path in my own professional career playing hockey."

In 2020, there were only 43 players of color in the NHL. Smith was one of three who suited up for Detroit—joining Madison Bowey and Trevor Daly. Those men helped him settle into life in the pros.

“I consider Trevor a hockey legend. I see someone just like me that I could have a similar career to that if not even better, but to be able to play in the National Hockey League for that long and to gain so much respect from peers around the league and also around the world, and to have little kids like myself, when I grew up playing hockey, look up to Trevor, it’s amazing. It creates a new generation of hockey players.

That new generation faces a familiar problem. Racism has always been part of the game for Smith, from youth hockey to his time in the OHL. When he was playing junior hockey he was racially targeted by fans and some opposing players.

"I would think it’s only happening to me because I’m Black, I’m a hockey player and it’s just how these people get jealous and it’s how they react to it. When I’m doing good things they feel hatred and they present themselves in that way. So I just though as a kid it’s just how it was being black. I didn’t really think too much of it. And it just kept happening and happening.

It helped enforce lessons of self control that his family instilled in him.

In fact, the forward says he became aware of how conflicts would end if he lost his cool. "it got to a point where it was ok for other people to do things and say things and to me, but if I were ever to speak up or have a reaction, it would almost be end of the world and everything would just turn on me."

It’s a feeling shared be many players of color in the sport, and Smith says it's something that bonds them all together,. Even if they choose not to talk about it because the pain and trauma can still feel fresh.

“There’s a lot of things that a lot of these players playing in this league or playing this game of hockey don’t have to go through that Black kids, us Black players in general playing hockey have to go through. It is what it is, harshly, but it does make us a lot stronger to overcome stuff like this.”

Just shy of his 23rd birthday, Smith is continuing to grow, not just as a professional hockey player but as a man. And he’s finding his voice.

“ I think definitely telling my story is very important, because if I don’t talk about my story then no one would know.”

The NHL is finding its voice as well when it comes to combating racism. Last summer the Hockey Diversity Alliance was formed by current and former NHL players to help eradicate systematic racism and intolerance in hockey. Smith sees its potential.

“It’s a step to greatness. it’s just making a big wave for the kids to get to see this in ten years. Or keep hearing about this in five years, 20 years. And as we keep growing and growing, I think it’ll turn into something really special.”

“It’s sad that it’s 2021 and we’re talking about doing all this stuff now, but at least this conversation is a topic in the NHL. “

But the Red Wings 2016 2nd round pick says that as he is determined to provide an example to young players, the same way Daly inspired him.