Photos of the smiling Shiba connected with people. Maru now has 2.5 million followers on Instagram. 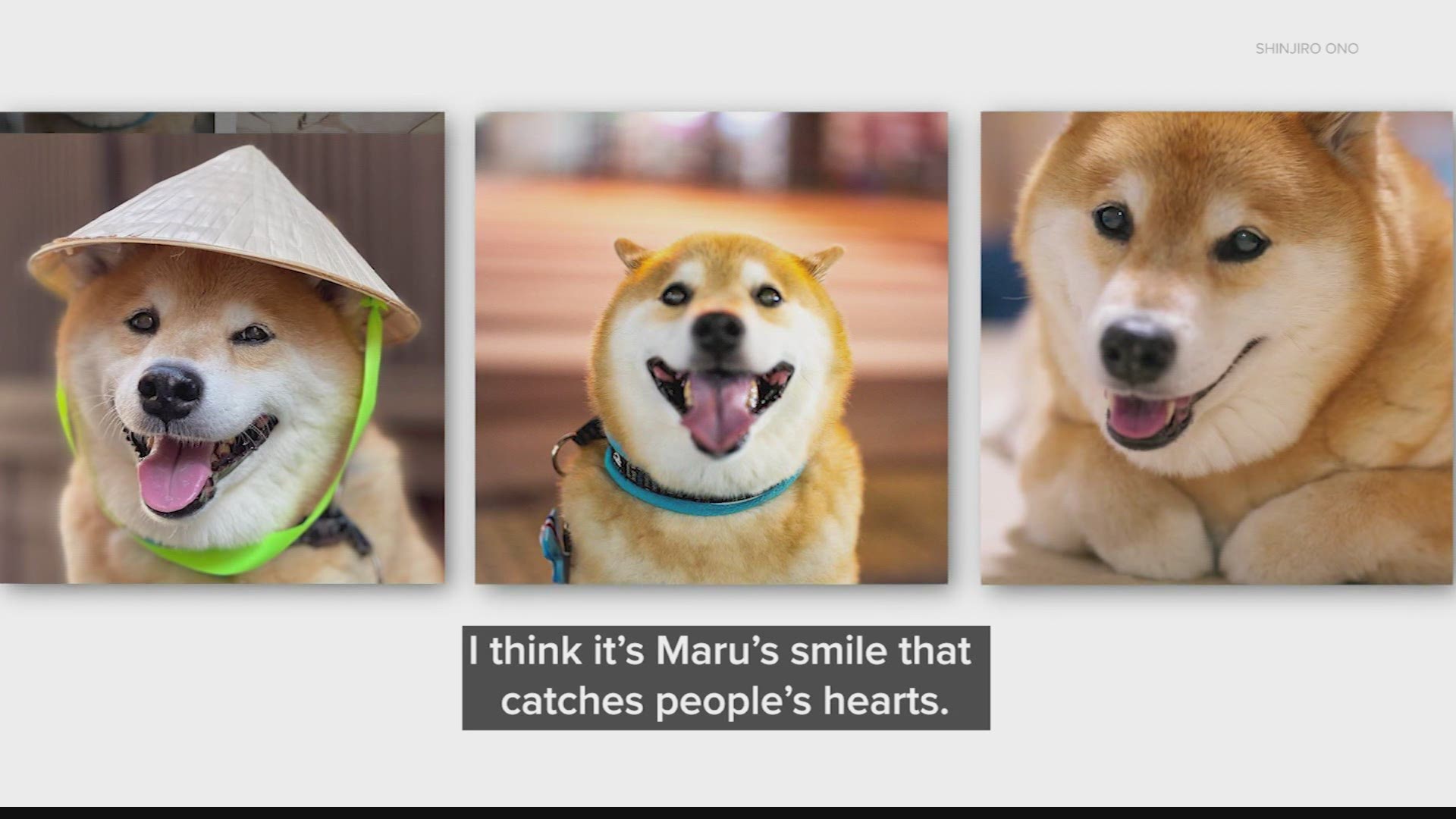 TOKYO, Japan — The Japanese people love their pets, even if some of them are a little unique.

When it comes to dogs, the Shiba is a popular breed. But there is something unique about this one.

"My dog's name is Maru. He's an 11-year-old Shiba. He weighs 18 kilograms (40 pounds). He's considered to be a big Shiba. Maru's charm may be because he's round," said the dog's owner, Shinjiro Ono. He runs a marketing company and is a salesperson for a semiconductor company.

Ono found Maru at a pet shop 11 years ago, saying the puppy was likely ignored because he had a round body.

"Every week, I passed this shop and saw other dogs bought by other people," Ono said. "But Maru was the last dog left. I became worried. What happens if I don't buy him?"

Ono bought the puppy on Christmas Eve and named him Maru, which means "the circle." They became inseparable.

"Maru and I are best friends. When we need each other, we play together," Ono said. "I like Maru playing in nature, like running in the snow. It shows how natural he is. That's my favorite moment with Maru."

Ono started posting pictures of their adventures on Instagram.

Photos of the smiling Shiba connected with people. Maru now has 2.5 million followers on Instagram.

"Out of that 2.5 million followers, 20 percent are Japanese and 80 percent are foreign followers," Ono said. "I try to communicate with every follower. Every eight hours, I try to communicate with the followers at least three times a day. My routine on social media is a good morning shot. In the early evening, I give a daily report on what Maru has done during the day. I show him sleeping or going to sleep."

The dog's popularity probably explains why a man wandered over during my interview just to get a glimpse of the dog.

There is also a market for Maru, quite literally.

"I produce original mugs, books and sells them at the shop," Ono said.

Credit: WTHR
Keychains with Maru's face on them.

Credit: WTHR
Maru's face is on almost anything including beer.

Maru's face is on everything. Maru has become a revenue generator, but not for his owner.

"The proceeds are given to the group that rescue dogs and other animals," said Ono. "I learned there are so many poor dogs that are difficult situations. I decided we could do more to rescue them."

Imagine that. The round dog once ignored in a pet shop now has his own shop. His smiling face who once couldn't get anyone's attention now gets 90,000 "likes" for a single photo.

"I don't see Maru as a celebrity," Ono said. "Living in Japan, you see so many Shiba dogs on the street. When I walk Maru, some people recognize him because I post so many photos. Maru-san is just an ordinary Shiba dog on the street."

Maru is impacting his owner.

"My has life has drastically changed. I was not an outgoing person. I was a typical shy Japanese person. Not talkative at all. But after I started living with Maru-san, people started talking to me and having conversations. We meet new people. Maru opens my door to the rest of the world," Ono said.

It has been quite a ride for Maru, a puppy that came from humble beginnings to become Japan's most popular dog.