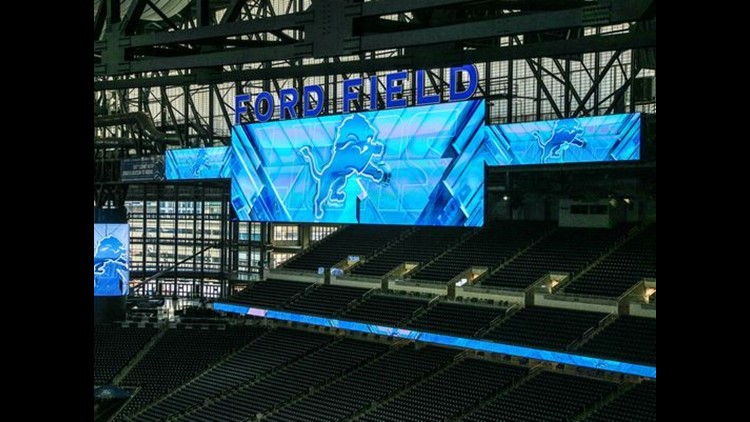 But when the Dan Gilbert-Tom Gores-backed ownership group abandoned plans to build a soccer-specific open-air stadium, and instead announced in November that it would retrofit Ford Field for soccer usage to save costs, it hurt the effort to put a MLS franchise in downtown Detroit in time for the 2020 season.

Garber was clear that Detroit remains in the mix when the league awards two additional franchises to start play in 2022 — if concerns over the venue are addressed.

“It set them back,” Garber said at Rhinegeist Brewery, a downtown joint located a short distance from where FC Cincinnati will build a soccer stadium.

“But in many ways, they have come together to retrofit Ford Field, which could make it very MLS-ready and they can talk about what those ideas might be, but they were really front runners when they were looking at the jail site.”

MLS wants to grow the league to 28 franchises, in hopes of adding the last two franchises by the 2022 season. But will the Gilbert-Gores group, which includes the William Clay Ford Family and the use of Ford Field, retain its appetite for the money-losing soccer venture?

Despite a $150 million expansion fee, which is expected to be higher in 2022?

Despite the public preference of MLS wanting open-air, soccer-specific venues and not football stadiums?

Despite a rabid soccer following in semi-pro Detroit City Football Club that is hostile — at best — to the idea of MLS?

A spokesperson for the Detroit bid wasn’t available for comment.

Before heading down the expansion path, MLS officials said applicants would improve their chances with a soccer-only venue.

Gilbert and Gores announced the venture in 2016, and during a follow-up news conference, Gilbert unveiled plans to build a 23,000-seat stadium on the Gratiot Avenue jail site. The stadium was part of a development project that was estimated to cost $1 billion.

But last fall, the group changed course, added the Ford family to the bid and announced plans to retrofit Ford Field for soccer matches. The Ford family owns the Detroit Lions and operates Ford Field, a roofed stadium.

“Partnering with the Ford family bolsters our powerhouse group and provides a perfect stadium solution in the heart of Detroit’s central business and sports and entertainment districts,” said Pistons vice chairman Arn Tellem in a release at the time.

Tellem has been coordinating the ownership group’s contact with MLS officials.

“Over the last two years, we have invested significant time, effort and resources into our bid to bring MLS to Detroit,” Tellem said. “After careful study and analysis, we concluded that the downtown location of an MLS stadium is paramount to an MLS team’s success.

"And no MLS stadium sits in a better downtown location than Ford Field. We also saw additional evidence that multi-use stadiums can be very successful in the right situation and we believe our new proposal is superior for the city and for MLS in every way.”

It hasn't been clear how much investment will come from the Fords.

But they were set to manage the site with 17 home matches for a regular season that goes from March to October. A site examination by architecture firm, Rossetti, concluded that Ford Field, with its 65,000-seat capacity, could easily be modified for MLS specifications.

“That was a gateway location to the city of Detroit,” Garber said. “A great ownership group with Dan Gilbert, the Pistons family with Tom Gores and a market that we’re excited about.

“There’s a lot of exciting things going on, but you got to have good facilities. We’ve learned over the last 20 years that facilities matter, location matters and they have a great location, but ensuring that the facility works for their fans long term — not just short term — is a necessity for us. That’s where they are for us.”

Gores was expected to operate day-to-day functions of the franchise, but with the Ford Field development, Gilbert likely would have played a role as a primary investor.

Detroit was one of several cities to submit expansion bids to join MLS in 2020. Cincinnati, Nashville, Sacramento and Detroit were the four finalists for 2020.

Nashville was awarded a franchise in December, and the other successful bidder was made official Tuesday after the Cincinnati city council voted — by a one-vote margin — to approve a 21,000-seat, $212.5 million soccer-specific stadium.

The council vote was needed to OK $34.8 million in infrastructure costs while FC Cincinnati pays for the venue.

Despite two billionaires and its status as one of the four finalists, Detroit will have competition for the two expansion spots for 2022.

“Detroit, Sacramento, San Diego are still in active discussions with us and we love all those cities and think we’d be great in those markets, but as evidenced by what happened here, it’s a process.”

No timetable was given to award the 2022 franchises, and the bid process hasn’t been determined, according to an MLS spokesman.

And if concerns are met, it’s hard to see Ford Field being a deal breaker.

The football venue doesn't match the MLS' smaller-stadium concept, but its location and indoor environment make it a viable and attractive option.

The MLS showed it can be amenable to larger venues, thanks to the success of the first-year Atlanta United FC franchise, which attracted 70,425 fans to Mercedes-Benz Stadium in September in the most-attended domestic game in the U.S. since the 1970s.

If the bid continues and is successful, Detroit would become the only market with all five major professional sports leagues based within walking distance of each other. Ford Field recently underwent $100 million in renovations.

With blue and orange flags hanging from the rafters, the chanting and blaring music didn’t stop for an hour.

Fans dressed in FC Cincinnati blue and orange packed the large, open-air banquet hall to hang on every word

The bid was led by billionaire Carl Lindner III, who owns the popular FC Cincinnati minor-league club that has set attendance records.

“The energy was incredible,” Cincinnati mayor John Cranley said. “We get a lot of complaints as politicians so it’s good to be in a place where people are cheering.”