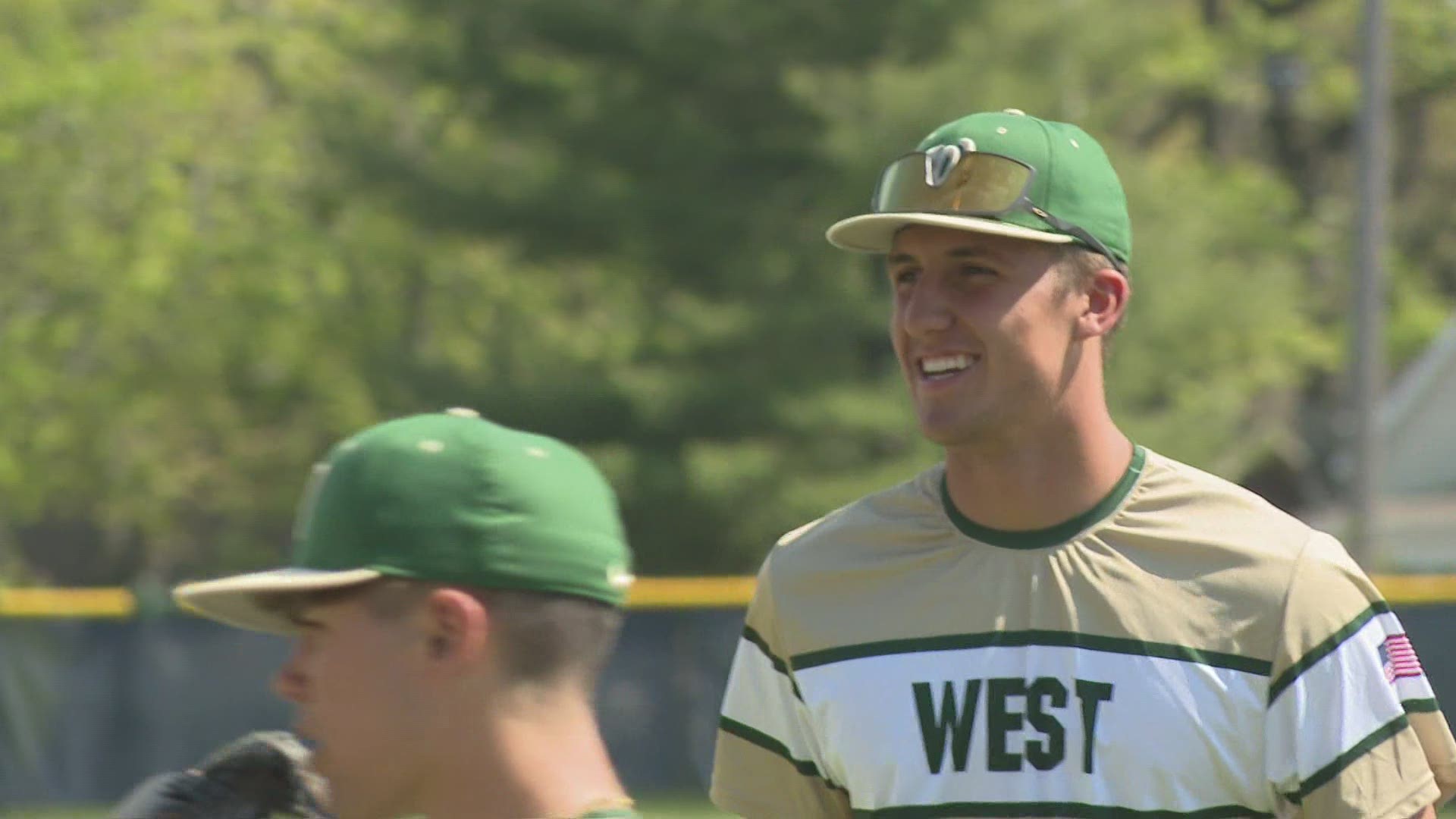 GRAND RAPIDS, Mich. — Carson Gulker has just about seen it all in the world of high school sports. From being named an all-conference basketball player this season, to being a four-years starter as the quarterback of the Zeeland West football team.

But what about baseball?

“I got into basketball," Gulker said. "So I played AAU basketball during the spring instead.”

He hadn't played baseball since eighth grade, but this spring, in his senior year, he decided to give it another try.

“I missed kind of being in the dugout and hanging out with the guys and stuff.

That’s not all he missed.

That’s a major understatement. As of May 20th Gulker had 40 RBI this season, breaking the old Zeeland West single-season record of 38, held by Maxwell Hecht. The Dux still have seven games left in 2021 for the first baseman to add to his legacy.

“I never really thought a lot about hitting. I just always thought I could do it so I just came out here without thinking and put the bat on the ball.”

That approach was noticed immediately by his head coach, Adam Locker.

“I want guys playing loose and having fun, and Carson came in with both.”

Locker has seen his fair share of talented baseball players in his seven season in charge of the program, but he hasn't seen many players pick up the game after a long absence and seemingly not miss a beat.

"I’ve been blessed to coach some amazing kids…but to see Carson join our team after not playing for so long and have the discipline and have the approach that he has, it’s been incredible.”

With a record of 22 and 7 the Dux are playing winning baseball and Locker says the play of Gulker has been a big reason why.

Soon the Six-foot-Four senior will head to Ferris State as part of their 2021 football recruiting class. But for now, he’s just doing what comes natural on the diamond.

"I just picked it up kind of naturally. I started the year kind of hot and just kept it going for awhile. It’s fun to be able to hit the ball, run the bases and bring my teammates home."

His coach thinks that even though he only got to work with the right-handed hitter for one season, that it could lead others to perhaps give baseball a try next year.

"Carson has shown the ability to come and have some fun on the baseball diamond," added Locker. "Because the reality is baseball is hard and we experience a lot of failure in the game of baseball. So if guys come with a laid back approach, that want to have a good time, then we can coach them up. I do hope that guys continue to say 'instead of sitting around and doing nothing in the spring, let’s go play baseball, that looks like fun.'”

For Gulker, that joy is what's made his senior season so special.

“Baseball is more of a people sport and that’s what makes it fun. Just the fact that you’re in the dugout with 18 other guys, just hanging out, chirping at the other team, chirping at your own guys, I like being a part of it. It's great."