‘She feels like a mom’: This school secretary collects food to feed hungry students

A single mother herself, Veronica Scarborough knows how hard it can be to make ends meet. That’s why she gives out dozens of snacks every day to needy students. 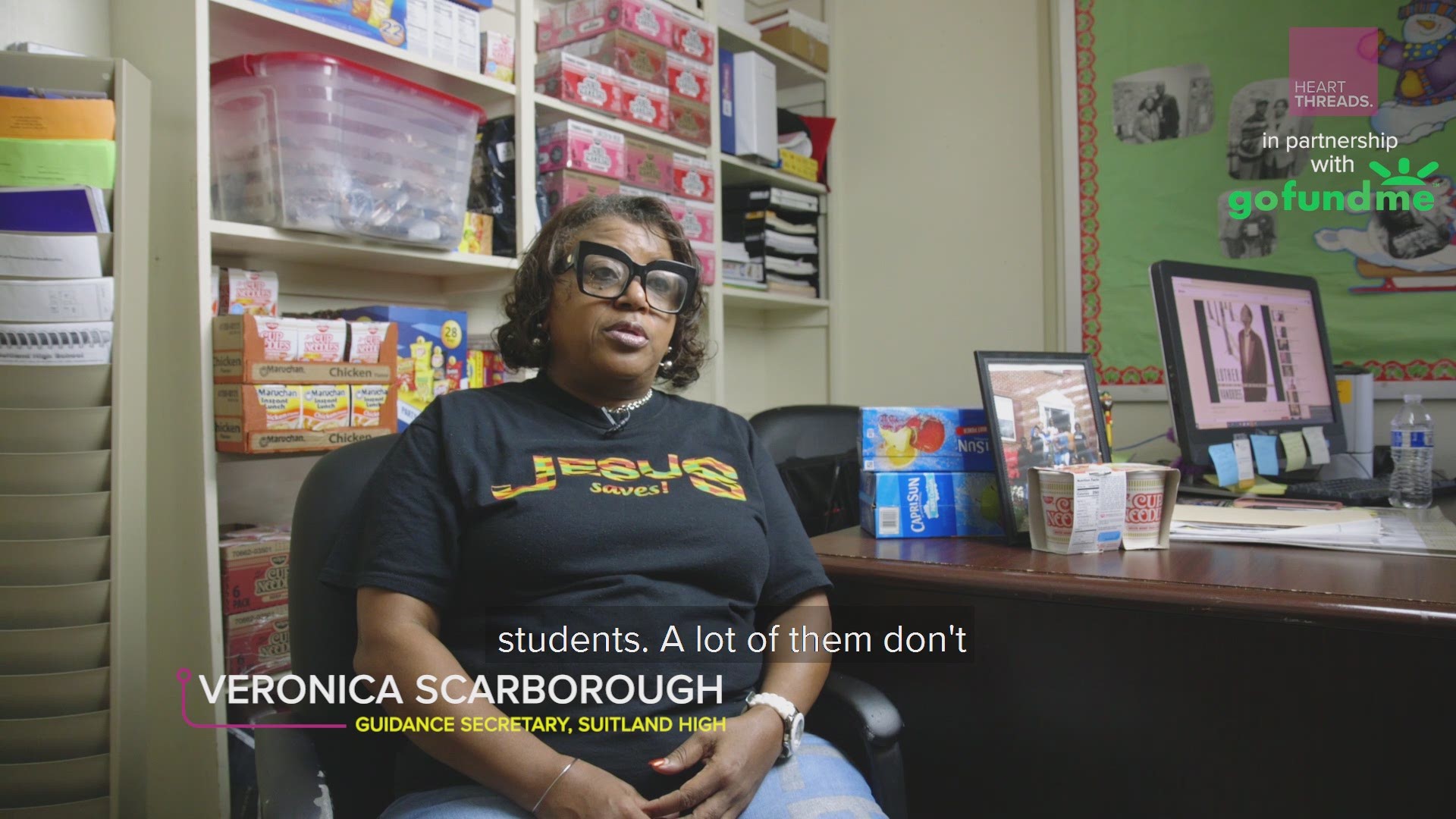 SUITLAND, Md. — Veronica Scarborough is running out of storage space in her office at Suitland High School.

Her floor-to-ceiling shelves are packed from top to bottom. Boxes spill onto the floor. Even a table outside her office is covered in packages.

And that’s just the way she likes it.

The boxes are taking up space for a good cause—they’re filled with snacks and drinks for students at Veronica’s school, many of whom cannot afford the food themselves.

It was at Waldon Woods where she first started her special project she calls “Ms. Veronica’s Friends.”

At first, it was a small mission. When Veronica learned that some students at the school were homeless, she wanted to help them.

She was inspired by her mother, Mary Scarborough, who had a reputation for feeding neighborhood kids despite being a single mother of eight.

“She would feed everybody in the neighborhood. How? Well because it was her heart,” Veronica said.

RELATED: Woman donates breast milk to NICU babies after losing her own son

Veronica is also a single mother and knows how hard it can be to make ends meet.

“I would like to think that somebody if my babies needed would reach out to them as I do,” Veronica said.

She started bringing in extra lunches to give away to students at Waldon Woods, but quickly found she couldn’t keep up with the demand on her own.

So, she reached out to some parents and people at her church to see if anyone might want to contribute food. The response was overwhelmingly positive.

Meanwhile, she also took matters into her own hands, asking restaurants directly for food and delivering it to the school herself.

RELATED: 8-year-old has raised more than $50,000 in care packages for homeless veterans

By the time she moved to Suitland High School, she was running a thriving outreach program, distributing dozens of meals to homeless students and preparing nearly 70 snack bags a day during the partial government shutdown.

When she moved to Suitland High School, her principal encouraged her to continue her work there, where more than 57 percent of students rely on free and reduced lunches.

She’s built partnerships with local churches, a university and even received a large donation from Congressman Steny Hoyer, an alumnus of Suitland High School and a representative for Maryland’s 5th Congressional District.

As Veronica’s connections grow in the community, so does her reputation among students.

Suitland students constantly filter through her office between periods, grabbing snacks to get them through the day. Some of them take extras home on the weekend.

“A lot of them with the working parents or some of them are foster students. A lot of them don't have the extra money to go to vending machines or and order food or go leave the premises to go get some food,” she said.

Katelyn Powell is one of Veronica’s regulars. She stops in every day to say hi or to talk about her college applications.

“She just feels like a mom to me, makes me feel like I want to come to school every day,” Katelyn said.

“I can't go a day without seeing Ms. Scarborough,” she said.

Veronica hopes her program will inspire students like Katelyn to give back to others after they leave Suitland.

“I want these babies when they go off to college, military, or whatever the case, performing arts, or wherever to remember to give back, remember somebody helped me and it only takes a cup of soup,” she said.

This story was produced in partnership with GoFundMe, who helps our HeartThreads team find the best stories about the best of us.

HeartThreads are the best stories about the best of us. Want more? Follow us: