Grant's Getaways: A convocation of eagles

Grant McOmie shows off one of the most remarkable eagle convocations in the Willamette Valley. 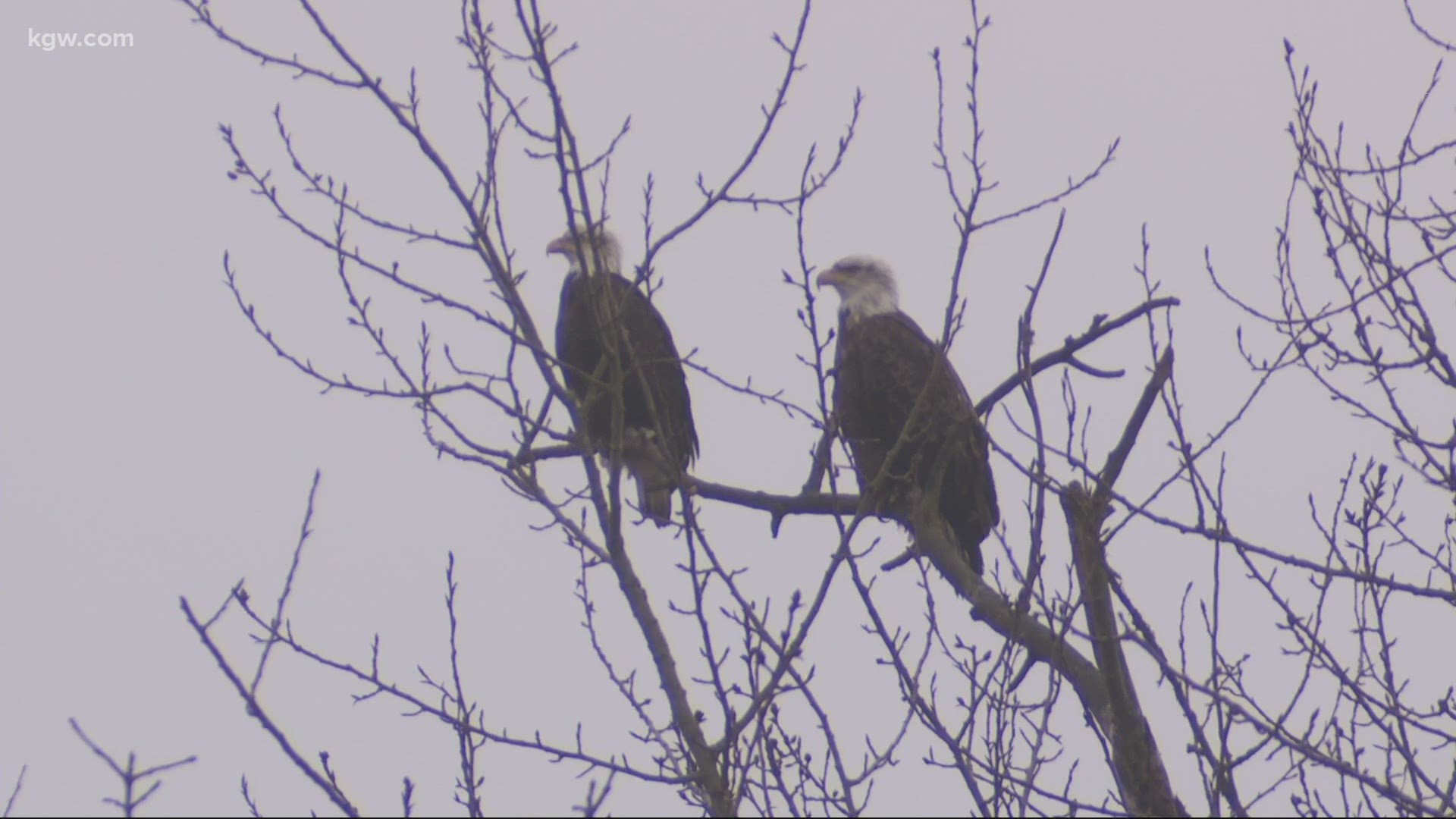 LINN COUNTY, Ore. — I think I know much about Oregon’s varied wildlife species, but I have to admit, when it comes to the names we give “collections” of wildlife I am often stumped.

How about you? Did you know that many deer are called a “herd,” but they can also be called a “bevy?” A collection of elk is not a herd but a “gang?” Collections of birds can be called flocks or flights – but geese can also be called a gaggle or a skein. Which brings us to our nation’s symbol. Bald eagles never gather in flocks but something far more regal that’s called a “convocation.”

One of the most amazing wildlife moments is found atop four-story tall cottonwood trees near Tangent, Oregon, where an eagle “convocation” draws up to 100 eagles in the Linn County tree tops each evening.

Even more remarkable, according to Jeff Fleischer, a retired U.S. Fish and Wildlife refuge manager, is that this convocation of eagles didn’t exist just a few years ago. Fleischer has tallied a rapid rise in the wintertime Willamette Valley eagle population.

“We have seen a wholesale increase; a doubling and then tripling of bald eagles in the southern end of the Willamette Valley," he said.

Fleischer is a member of the East Cascades Audubon Society and he leads a statewide Raptor Survey Project each year. He will drive more than 2,400 miles across Willamette Valley main lines and back roads to count eagles in trees, on poles, in fields or in flight.

Over the last several years, a typical high count for a winter’s day was 50. Fleischer said last year that number skyrocketed!

Fleischer said he thinks more eagles have arrived in the Willamette Valley because the dining is so good.

“During the winter, a lot of sheep…will die for various reasons and the carcasses are left in the fields," he explained. "That’s what eagles key on without question.”

“The increase in sheep brought the increase in eagles,” noted Fleischer. “It’s an easily accessed food source and eagles don’t have to expend a lot of energy to eat.”

Joel Geier is a member of Oregon’s Field Ornithologists and his organization recently partnered with other groups, including Oregon’s Division of Tourism, to identify 130 “Birding Trails” in the Willamette Valley. He said eagle viewing opportunities are spectacular and could bring even more visitors to rural towns in the valley.

“You may see eagles standing on the ground, perched in trees or flying across the fields," Geier said. "They are distinct and hard to miss.”

Geier said visitors can follow the “Willamette Valley Birding Trail” that goes past the eagle convocation in Linn County.

“You don’t need fancy optics to see eagles because they are so big," he said. "Some may be seen just 100 yards off the roadway.”

Steve Seibel enjoys taking photos of eagles and he has documented their feeding behavior.

“Typically, the birds displace each other – that is, one will feed for awhile and then another will come in and move the first bird away," he said. "The food seems to be so abundant that they don’t fight to hold their position – seems like they’re living in the land of plenty here.”

Geier reminds visitors that etiquette demands you should pull to the side of the road and not block private roads or driveways.

“Be aware that almost everything 10 feet off the road is private land,” said Geier. ”So, stay on the shoulder of the roadway and don’t wander across fields.”

You can also visit wildlife refuges and see eagles in the Willamette Valley. W Finley, Ankeny and Baskett Slough are easily accessed public settings to see bald eagles and other birds, including thousands of waterfowl.

For information about Oregon’s birding trails and to get the weekly wildlife report about birds and other wildlife activity, visit the Oregon Department of Fish and Wildlife bird watching page.

Be sure to follow my Oregon adventures via the new Grant’s Getaways Podcast as I relate behind the scenes stories from nearly four decades of television reporting.

My next book, “Grant’s Getaways: Another 101 Oregon Adventures” will be published in 2022.