Funnels and Waterspouts over West Michigan 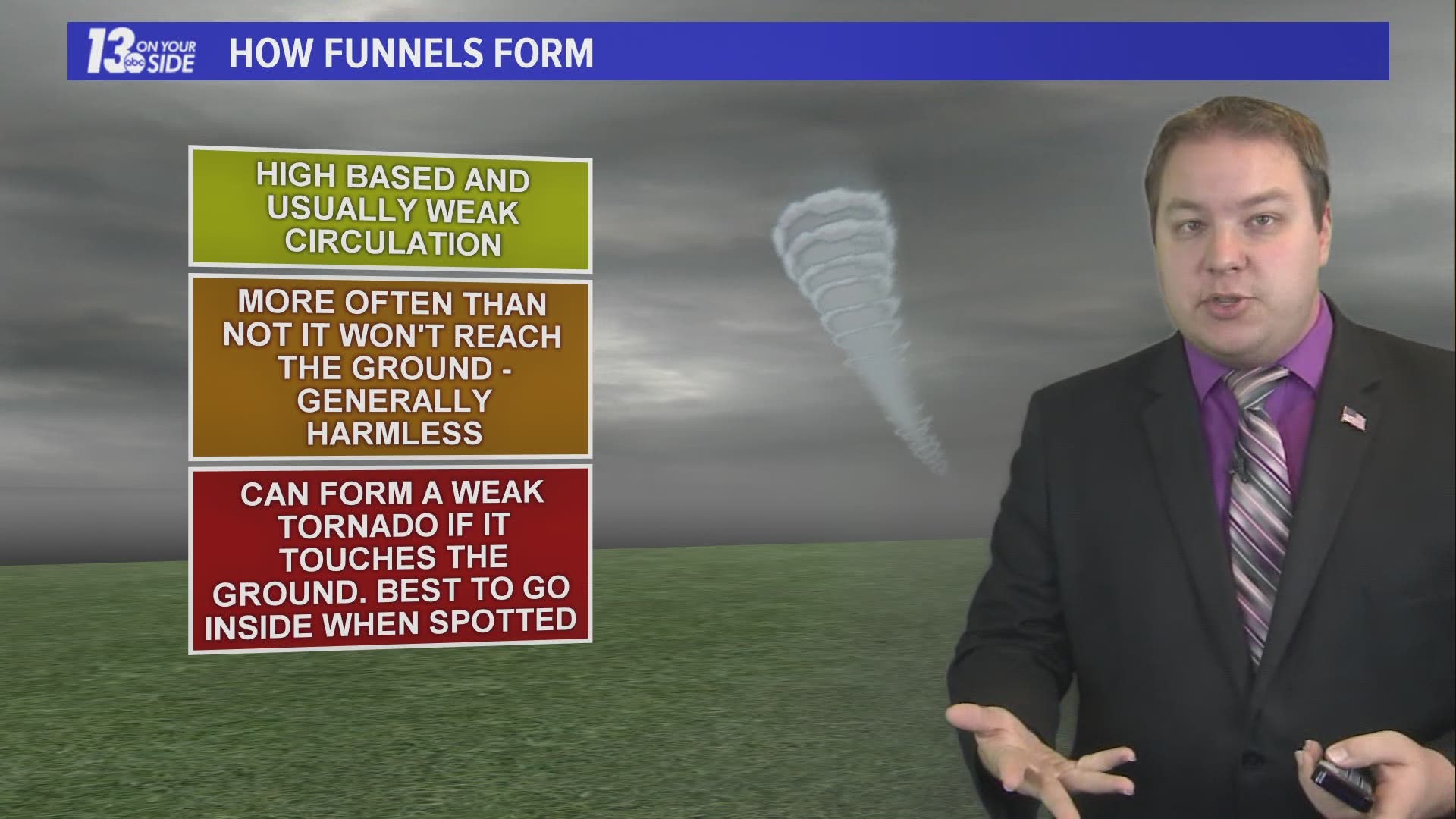 GRAND RAPIDS, Mich. — Showers and storms developed over West Michigan on Wednesday, and we are looking at similar possibilities as we head through Thursday.

RELATED: 13 On Your Side Forecast: More Storms Possible Thursday!

While these storms largely remained harmless, they did end up producing a large amount of small hail over the region, and on occasion, a waterspout and something called a "cold air funnel". Conditions could allow for these to again form tomorrow, but how are these formed and should you be concerned?

How They Form & Their Impact:

When you have warm air at the surface, this air will naturally want to rise. If there is also enough wind at the surface, and there is wind above the surface flowing in a different direction, this difference can impart a spin to the rising warm air. This rising, and now spinning, column of air can form a condensation funnel (the visible part of a funnel) as it heads toward the clouds, thus creating our cold air funnel.

These funnels are called cold air funnels because the air above the surface is significantly colder than the air at surface level. These funnels form in the cold air aloft, thus getting their name.

Unlike with a tornado, the storm or clouds that these funnels form under are not also rotating. This lack of a stronger parent rotation means these funnels are almost always weak and harmless.

That isn't to say they cannot cause harm. On occasion a cold air funnel may touch down and become a very weak tornado, causing minor damage.

As this is something that could happen, it is recommended that you seek shelter in a sturdy building when cold air funnels have been spotted, though the danger is very limited.

As another note, these funnels can form over Lake Michigan as well, especially when water temperatures are mild, creating weak and short lived waterspouts. These form in a similar way, with warm surface air being supplied by the mild lake waters.

We had several of these form Wednesday, which isn't surprising given that lake temperatures are still in the 60s.

While over water these waterspouts could pose a danger to boaters and should be avoided, but like their land based counterparts, the dynamics creating these funnels are weak and not connected to a parent rotation, making the threat far less than that of a waterspout formed by a traditional tornadic storm.

Also, like cold air funnels, these waterspouts could move onshore and cause minor damage, but most all will dissipate quickly after loosing access to the warmer temperatures over the lake.

So, in conclusion, these rotations are mostly just a neat phenomenon to photograph and watch on a rainy day without posing an major threats. However, you should still keep an eye on these, and seek shelter if any appear to be reaching ground level.