As things warm up around West Michigan the remaining lake ice will continue to grow more dangerous. Meteorologist Michael Behrens reminds you to stay safe. 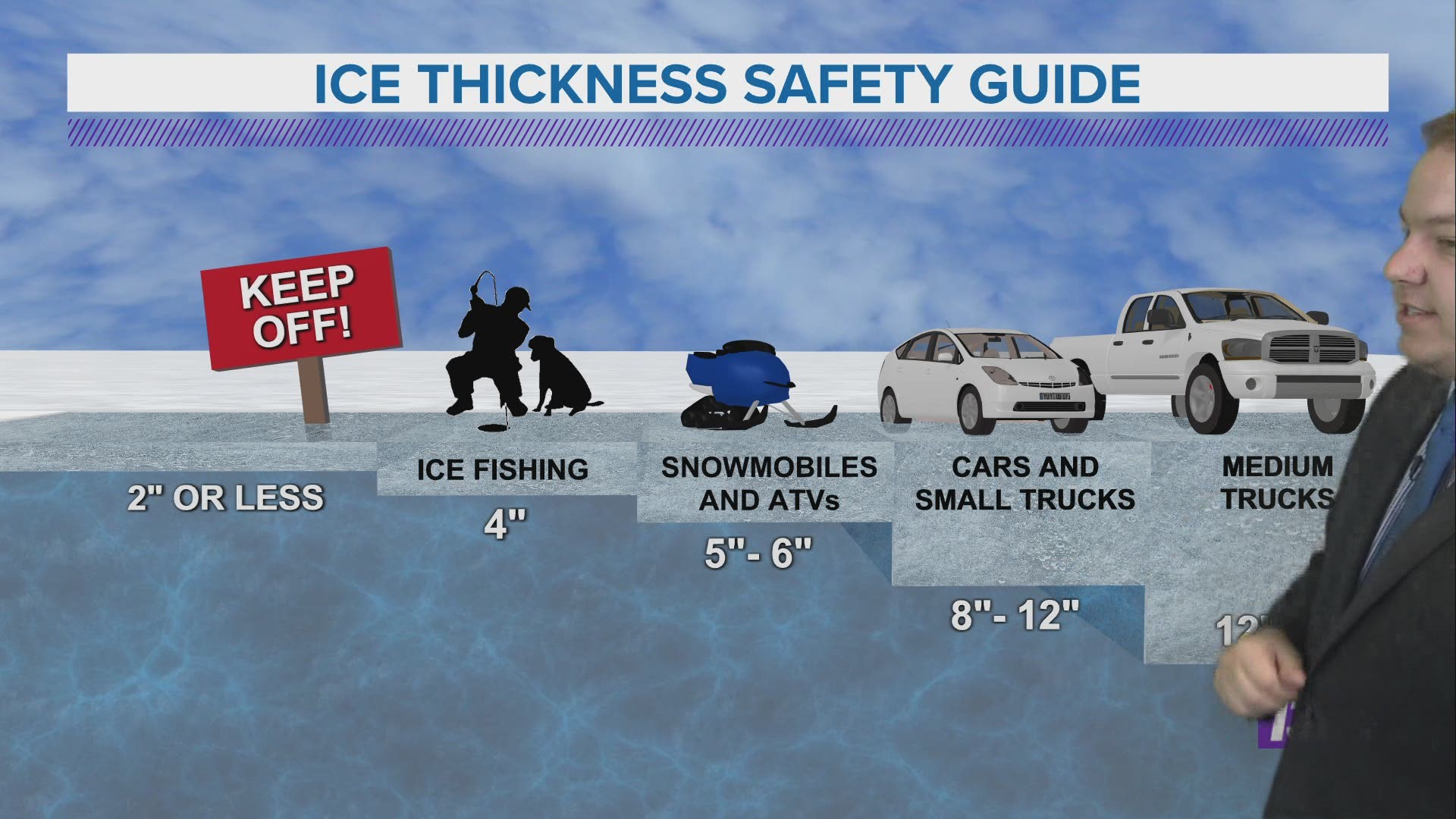 GRAND RAPIDS, Mich. — As we head into March it is becoming clearer and clearer that the end of ice fishing, and for that matter most of the ice itself, is upon us.

It was just a few days ago, March 1st, that the deadline to remove ice shanties arrived in most of the Lower Peninsula, and the latest DNR Fishing Report shows that more fishing can be done off ice around our region than on ice.

RELATED: For portions of the lower peninsula, it's time to remove the ice shanty

That doesn't mean the ice is all gone though, and in places like Muskegon Lake ice fishing is still possible. However, with temperatures above freezing most afternoons since February 20th, the ice that remains is getting thinner and getting weaker.

So with that in mind, let's talk ice safety.

The usual rules are that 4 inches of ice are safe enough for ice fishing, and 8-12 inches will get you to small cars and trucks. That starts to change when ice is in the melting phase.

Ice can become hollow and much less dense, in effect "rotten", from sunny days causing internal melting. This means ice that could be well over 4 inches thick will not support someone walking on it. When we get into the thawing phase of late winter and early spring, the thickness of the ice is no longer as important as the strength of the ice, and the two become less and less related.

With this in mind, having a spud or other tool to test ice strength is vital for anyone planning to head out. You should plan to use this tool the entire way to your final location as weak spots and inconsistencies in the ice are to be expected.

Along those lines, ice can change drastically in a 24 hour period, with multiple inches of loss possible on a mild and windy day. Never assume ice that was safe yesterday, or even a few hours ago, is still safe.

Credit: Michael Behrens
The above are things to keep in mind when on or planning to go on ice during the thawing season.

Safety is key when on or near the ice, and no ice should ever be considered totally safe. This becomes that much more true while the ice is thawing.

Just Wednesday afternoon March 3rd, Deputies from the Berrien County Sheriff's Office had to assist in a rescue on Obrien Lake for a man that had fallen through the ice. He was being held up by a rope held onto by his fishing partner.

Thankfully only minor injuries were reported.