The 2020 Winter Outlook remains on track to bring wet and chilly conditions to our part of the country. That means West Michigan may see higher amounts of snow. 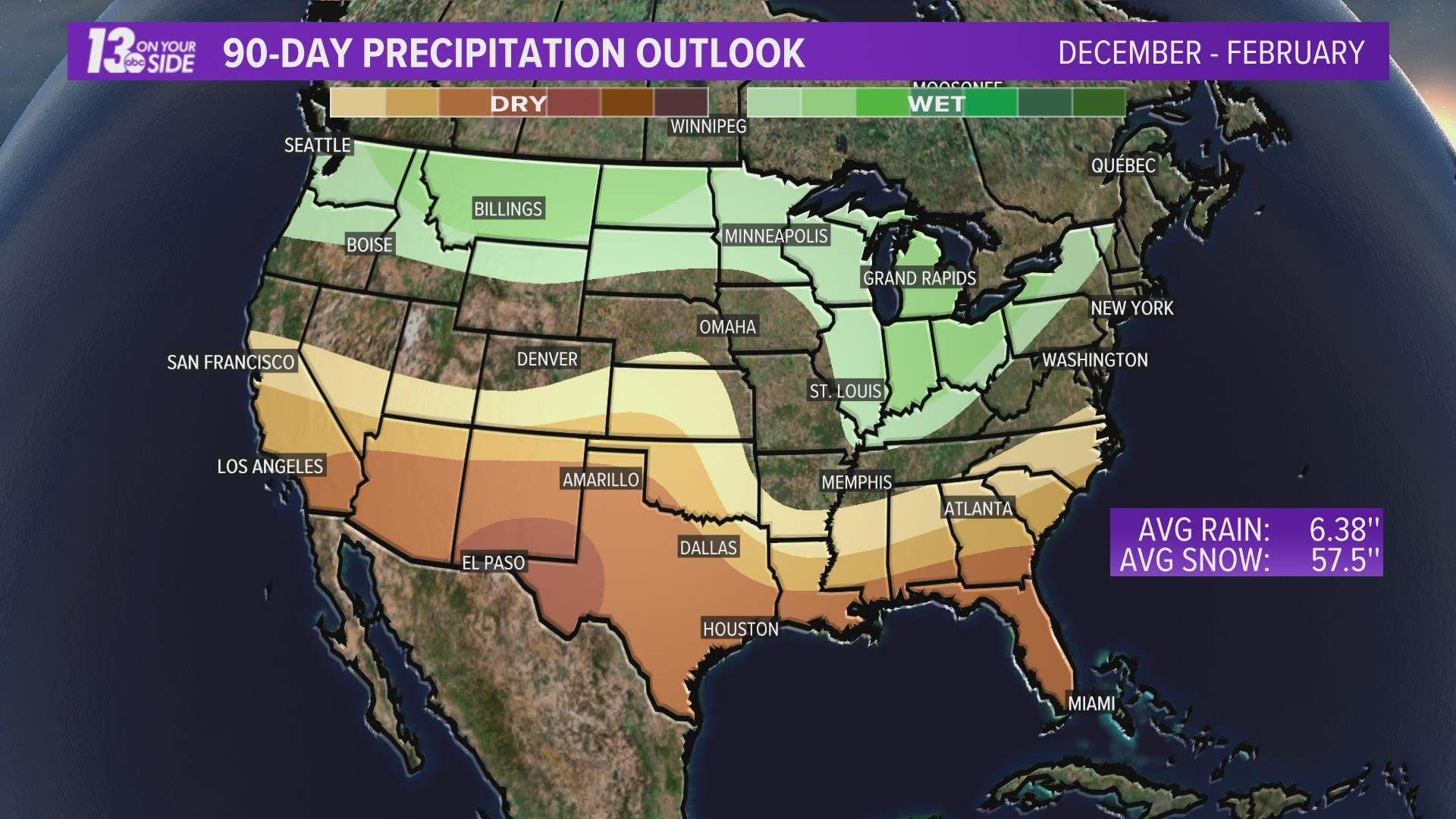 GRAND RAPIDS, Mich. — (UPDATE: With the newest round of data, no major changes have occurred in the winter season forecast. The maps and images below have been updated to the latest information, with only minor changes being made to the outlook, none of which impact expected conditions in West Michigan.)

The National Oceanic and Atmospheric Administration (NOAA) released their 2020 Winter Outlook back in October and their predictions are no surprise to meteorologists.

A La Niña pattern has set in south of the equator and is expected to last through the winter. This set up has some very predictable impacts to West Michigan.

First, don't expect a warm winter. While the official NOAA outlook lists us as having equal chances for above or below normal temperatures this coming season, generally a La Niña will favor cooler temperatures in northern portions of the U.S. to the west of the Great Lakes. This pattern will make it easier for those cold blasts to travel into West Michigan

This is because the southern jet stream will be in a weakened state and thus stay further to the south. This will allow the northern jet stream to dip down into the continental U.S. further and more often, setting up bouts of cold weather across the region.

Credit: NOAA
The NOAA Winter Temperature Outlook as of November 19, 2020.

In addition to favoring colder winters, the La Niña pattern will favor wetter winters along northern portions of the U.S. as well.

This is because storm systems will ride in along that northern jet stream. As that jet drops into the U.S. it will carry these winter storms along with it.

Credit: NOAA
The NOAA Winter Precipitation Outlook as of November 19, 2020.

As mentioned earlier, these forecasts are no surprise.

In fact they line up almost identically with the text book expectations for a La Niña winter in the U.S.

For some context as to how this could play out for our region, two out of the top three snowiest winters (December-February) in West Michigan were during La Niña years.

The snowiest of all time was during a neutral year.

Another item released in the NOAA Winter 2020 Outlook was the drought forecast.

West Michigan had been experiencing some drier than average conditions through this fall, but it pales in comparison to the drought conditions out west.

In fact, in recent weeks dry/drought conditions have all but vanished from West Michigan.

Credit: National Drought Mitigation Center
Drought conditions around the U.S. as of 11/19/2020.

Still, with such extreme droughts in place over parts of the country, it is no surprise that wildfires have been impacting western portions of the U.S. for many weeks.

RELATED: Here's a look at all the wildfires burning in Colorado right now

The bad news for this already hard hit region is that a La Niña pattern offers them no sign of relief. In fact drought conditions in the region are expected to worsen for all but the Pacific Northwest.

West Michigan should see the benefits of a wetter than average winter in this regard.

So that's the outlook as it stands right now.

Near normal temperature conditions likely in West Michigan, with chances for a wetter (and perhaps snowier) winter, when compared usual, looking possible.

The good news is the 13 ON YOUR SIDE weather team will be here all winter long to keep you covered and up to date with the latest forecast!

You can always count on us to get you ready for the day, the week, or the season ahead!